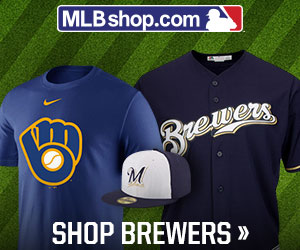 Ever since the Milwaukee Brewers’ last playoff appearance in 2011, things may have not turned out the way Brewers wanted. Last year the Brewers just barely missed the playoffs. They finished the regular season with an 86-76 record and 2nd in the NL Central Division behind the Chicago Cubs. Unfortunately though the Brewers finished one game behind the Colorado Rockies for the second Wild Card spot. However, with ace ball players like Travis Shaw and Eric Thames, Milwaukee may just break the bad streak and reach the playoffs this season.

But for that to happen, they need you in the stands. So, get your Milwaukee Brewers tickets here.

The Brewers are determined to bring a championship to Milwaukee. They will look to beat out rivals the Chicago Cubs and the St. Louis Cardinals to reclaim the division crown. A long the way, Milwaukee is striving to be the premier team in Minnesota and over take the Minnesota Twins.

Grab your Milwaukee Brewers tickets and head down to Miller Park to lead your team on their championship hunt.

Greatest Moments in the History of Milwaukee Brewers

Founded in 1969, the Milwaukee Brewers have played some of the most memorable games on field, especially against their traditional rivals, the Chicago Cubs and the St. Louis Cardinals. Here, we look at some of their greatest moments from these rivalries.

The 1982 season – The 1982 campaign brings back a lot of good memories for the fans of the Milwaukee Brewers. That year, they won the division title and the AL Pennant for the first time ever.They went on to face the St. Louis Cardinals in the World Series. It remains to date their only World Series appearance. The seven Game series between The Brew Crew and The Birds took every fan on a thrilling ride. Both sides played phenomenally well, but in the end the Brewers came up short and lost the World Series title to the Cardinals, 4-3.

Ryan Braun Helps the Brewers Qualify For the Playoffs – After the 1982 campaign, the Milwaukee Brewers failed to make it to the postseason for next twenty six years. However, in 2008 things took a turn for the better for The Brew Crew. In game 162 of the 2008 campaign, the Brewers faced their rivals, the Cubs for a playoff berth. That bout was won by the former thanks to Ryan Braun who launched a two-run home run in the eighth inning to give his team a 3-1 lead. This helped the Brewers qualify for the playoffs. Braun’s heroism that day will always be remembered by the fans in Milwaukee.

As mentioned earlier, the Milwaukee Brewers share fierce rivalries with the Chicago Cubs and the St. Louis Cardinals.

Brewers-Cubs Rivalry – The Brew Crew and the North Siders became rivals because both play in the MLB’s National League Central Division and are located 83.3 miles from each other off Interstate 94. These two teams locked horns for the first time as division rivals on June 15, 1998, at the Wrigley Field. The Cubs won that game, 6-5. They most recently collided on September 10, 2017, again at the Wrigley Field where The Brew Crew emerged victorious, 3-1.

Brewers-Cardinals Rivalry – The Brewers and the Cardinals’ rivalry was born when the latter defeated the former for the World Series Championship in 1982. Another reason behind their fierce competitiveness is that both The Brew Crew and The Birds are members of MLB’s National League Central Division.

Getting to know the Milwaukee Brewers

Since their establishment, the Brewers have called three different ballparks their home, with Miller Park being their present home. This 42,000 seat stadium has been home to the Brewers since 2001. Miller Park features North America's only fan-shaped convertible roof. Fans get to enjoy the Klement's Sausage Race that occurs during each game in the middle of the 6th inning. Brewer history is also displayed with the Brewer Park Walk of Fame and the Brewers Wall of Honor.

Greatest Players in the history of Milwaukee Brewers

Robin Yount spent his twenty-year career as a center fielder and shortstop for the Milwaukee Brewers. While Yount was with The Brew Crew, he won three Silver Slugger Awards in 1980, 1982 and 1989. He also took home one Gold Glove Award in 1982. In addition, Yount was selected to play in the All-Star game three times in 1980, 1982 and 1983.

Then there is Paul Molitor who stayed with the Milwaukee Brewers from 1978 to 1992. During his time with the team, he played in five All-Star games and received two Silver Slugger Awards in 1987 and 1988. Moreover, The Brew Crew honored him by retiring his number 4 on June 11, 1999.

There are other players as well like, Hank Aaron, Rollie Fingers and Don Suttonwhose contributions to the team’s success cannot be forgotten. All these three stars have been inducted into the Milwaukee Brewers Hall of Fame.

Though the Milwaukee Brewers have been struggling to find their form since 2011, they have nevertheless some of the best ballplayers in the MLB.

With a strong roster, the Brewers now plan to dominate the current season of the MLB and you can watch them. Buy Brewers Tickets from here.

The last thing you want to find out is when the Milwaukee Brewers event you wanted to go to is sold-out. Don’t worry in many cases ScoreBig has affordable tickets to sold out events. We sell tickets from GA all the way to premium seating and parking. Skip the scalpers in the parking lot and get your tickets online from top Milwaukee Brewers ticket brokers. We get you in all events, buy your Milwaukee Brewers tickets here from a brand that many trust and rely on for all their ticketing needs.

ScoreBig offers a 100% money-back guarantee. If you have been in search of cheap tickets for Milwaukee Brewers, ScoreBig by far is the best option. That’s why ScoreBig has more loyal customers than any other ticketing site. Shop at ScoreBig for safe and secure Milwaukee Brewers event tickets.