Cheap Indianapolis Colts Tickets 2022 | ScoreBig.com
ScoreBig is a resale marketplace. Ticket prices may be above face value.
Ashburn, VA, US
All Dates
X 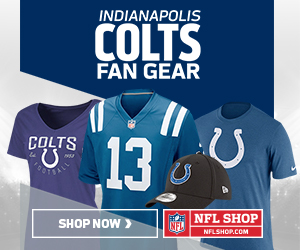 The Colts are locked and loaded and ready to bring home a Super Bowl trophy. Led by a high-powered offense, Indianapolis have the sights set on winning the AFC North. Division rivals, the Houston Texans and the Tennessee Titans will look to spoil the Colts' aspirations. Grab your Indianapolis Colts tickets and lead your team on their championship quest.

The 2017 season was the Colts' 65th season in the National Football League and 35th in Indianapolis. The team originally started in Baltimore and moved to Indianapolis in 1984. This most recent season was also the final season for head coach Chuck Pagano, who was fired at the end of the season. The Colts finished the regular season with a 4-12 record which was the Colts first losing season since 2011. This put the Colts in 14th place in the AFC and subsequently did not make it to the postseason. Indianapolis is back for the upcoming season and is ready to make a big comeback. They have not made a playoff appearance since 2014. Will this be the year that the Colts can finally make a playoff run? Grab your Colts tickets from ScoreBig to find out!

History of the Colts

The Colts began in Baltimore as an expansion team in 1953. The Baltimore team struggled initially, not having their first winning season until 1957. In 1958 the Colts finished the regular season 9-3 and ended up making it all the way to the NFL Championship Game for the first time ever in Colts history. The Colts faced the New York Giants in what is considered one of the greatest games in NFL history. The Colts beat the Giants 23-17 in the first NFL game to utilize overtime. The game was broadcast on television and had over 45 million viewers. The Colts headed back to the NFL Championship Game in 1959 to win back to back championship games. In 1968 the Colts won their third NFL Championship. In the 1970 season, after the AFL-NFL merger, the Colts stunned their competition by finishing the regular season 11-2-1 and won the AFC East title. The Colts beat the Cincinnati Bengals 17-0 in the First Round of the playoffs. They went on to the first ever AFC Championship Game where the Colts beat the Oakland Raiders 27-17. The Colts made history by beating the Dallas Cowboys in the first post-merger Super Bowl and winning their first Super Bowl in franchise history.

The Baltimore Colts played their last game in Baltimore on December 18, 1983 and by 1984 the Colts were in their new home of Indianapolis. The move did not seem to do so well for the team initially. During the first eleven seasons in Indianapolis, the Colts only appeared in the postseason once. Things started to turn around for the Colts in 1995 when running back Marshall Faulk was drafted. The team also acquired quarterback Jim Harbaugh helping the team finally make it to the postseason again in 1995 and 1996.

In the 1998 NFL Draft, the Colts had the first overall pick and drafted quarterback Peyton Manning from the University of Tennessee. The team struggled to get on its feet in the 1998 season but found a groove for themselves in 1999, finishing the regular season 13-3. This put the Colts in first place in the AFC East for the first time since 1987. The Colts missed the playoffs in 2000 and 2001 and the organization began to get worried. Head coach Jim Mora was fired at the end of the 2001 season and replaced by Tony Dungy. Dungy turned the team around right away and the Colts qualified for the playoffs for years to come. A rivalry against the New England Patriots began to blossom when the Colts lost to the Pats in the 2003 AFC Championship Game and in the 2004 divisional playoffs. Manning versus Brady was an intense rivalry that everyone looked forward to watching. After the two playoff losses to the Pats in 2003 and 2004, the Colts finished the 2005 season with a 14-2 record, including a win over the Patriots. This was the first loss for Brady against Manning. Unfortunately, the Colts could not make it through the postseason and lost to the Pittsburgh Steelers in the divisional round. The Colts returned in the 2006 season with vengeance. Indianapolis finished the regular season 12-4 and clinched the number three seed in the AFC. The Colts beat the Kansas City Chiefs and Baltimore Ravens to return to the AFC Championship Game. In the AFC Championship Game, the Colts faced their rival yet again: the New England Patriots. The Pats fell to the Colts 38-34 and Indianapolis was on their way to play in Super Bowl XLI. Indianapolis beat the Chicago Bears 29-17, giving Indianapolis their first Super Bowl title and the Colts franchise their second title.

Located in downtown Indianapolis, Indiana, this 63,000 seat venue is a great place to watch a Colts contest. The main entrance features a sound stage for pre-game concerts that overlooks the football field. Lucas Oil Stadium also provides fans with breathtaking views of the Indianapolis skyline through the movable north windows, which provide signature photo opportunities.

The last thing you want to find out is when the Indianapolis Colts event you wanted to go to is sold-out. Don’t worry in many cases ScoreBig has affordable tickets to sold out events. We sell tickets from GA all the way to premium seating and parking. Skip the scalpers in the parking lot and get your tickets online from top Indianapolis Colts ticket brokers. We get you in all events, buy your Indianapolis Colts tickets here from a brand that many trust and rely on for all their ticketing needs.

ScoreBig offers a 100% money-back guarantee. If you have been in search of cheap tickets for Indianapolis Colts, ScoreBig by far is the best option. That’s why ScoreBig has more loyal customers than any other ticketing site. Shop at ScoreBig for safe and secure Indianapolis Colts event tickets.