Wrestling Tickets | Wrestling 2020 | ScoreBig.com
ScoreBig is a resale marketplace. Ticket prices may be above face value.
Ashburn, VA, US
All Dates
X 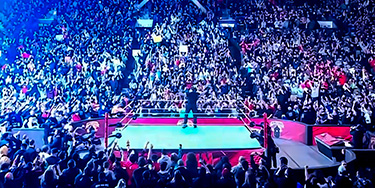 For those who grew up idolizing the likes of Hulk Hogan, Dwayne Johnson, the Undertaker and Rey Mysterio, the need for getting their hands on the latest wrestling tickets is almost never-ending. The combat sport has gained a huge fan following over the years, becoming almost theatrical for the sake of entertainment, but still retaining the genuine competitive atmosphere.

The origins of sport date back to the Stone Age. Cave drawings discovered in France are a testament to that. The sport is also known to have occupied a prominent place in ancient Greek literature, with wrestling competitions serving as a major sport of the ancient Olympic Games. The Indian epics, Mahabharata and Ramayana also contain references to various forms of martial arts, including wrestling. Amateur wrestling began to appear in North American colonies, becoming a popular activity at local fairs, holiday celebrations and military exercises. The first properly organized wrestling tournament happened in New York in 1888. The governing body for the sport, the United World Wrestling, was set up in 1912.

The Big Names in Wrestling

Over the years, the combat sport has gained wide fame and fan following, especially among young boys. Even though the sport is largely staged and choreographed beforehand, and to some, it is not even a legitimate sport, wrestling is as professional as any other sport. The pain is real, bones do break and lifetime injuries are inflicted – just like any other sport. Let’s take a look at some of the biggest names in the wrestling industry over the years:

Ric Flair: The wrestler with ‘flair’, Ric Flair took the NWA and WCW by storm. His career spanned over 40 years and he was considered one of the top performers of the 1980s. Flair became a major pay-per-view attraction very early on in his career. He won the 1992’s Royal Rumble and was awarded the Wrestler of the Year award six times by the Pro Wrestling Illustrated (PWI). The Wrestler Observer Newsletter named him the Wrestler of the Year a record eight times. Ric Flair is also the only two-time inductee in the Hall of Fame at WWE and is also a NWA Hall of Famer.

“Stone Cold” Steve Austin: The beer drinking, foul mouthed wrestler was not on anyone’s list for wrestlers who would make it big in the industry. But they had to eat humble pie when Austin became one of the greatest wrestlers of all time. His persona of Stone Cold made him popular as the “poster boy of the Attitude Era.” He won 19 championships during the course of his career and was a six-time WWF Champion, a four-time WWF Tag Team Champion, and a two-time WCW US Heavyweight Champion, among other honors.

Hulk Hogan: No discussion of wrestling is complete without the mention of the legend, Hulk Hogan. He is regarded as one of the most recognized wrestling stars of all time, becoming the face of the World Wrestling Federation between 1984 and 1993. Hogan is a twelve-time world champion, with six WWF Heavyweight Champion titles and six WCW World Heavyweight titles. He was inducted into the WWE Hall of Fame by Sylvester Stallone in 2005.

The Undertaker: If WWE had a heart, it would be The Undertaker. Since he first appeared in the WWE, he has been a dominant force in the ring. He is wildly popular for The Streak, a consecutive 21 victories at Wrestlemania before finally losing out to Brock Lesnar. The Undertaker also holds the USWA Unified World Heavyweight Championship and has won the WWF/WWE championship a total of four times. He also won the Royal Rumble in 2007.

The Rock: One of the mostly widely recognized wrestlers and now actors is The Rock. His charismatic personality, from the catchphrases to the eyebrow, made him a favorite in the wrestling world. He gained mainstream fame in the wrestling world between 1996 and 2004 and returned to WWE in 2011 till 2013 on a part time basis. He is an eight time WWF/WWE Champion, five times WWF Tag Team Champion and the sixth Triple Crown Champion in WWE. He was named the Sexiest Man Alive by People Magazine in 2016 and has been a part of multiple hit movies.

Wrestling Events to Watch in 2018

Lucky for the fans of the sport, lots of amazing wrestling events are lined up for 2018.

Greco-Roman Nationals: This all-day event is scheduled to begin in Las Vegas on 25th of April, 2018 and will continue on till the end of the month. This Men’s Freestyle event has existed for more than 100 years now, going back to the 1904 Olympic Games in St. Louise. To date, the US has won more than 50 Olympic championships.

Folkstyle Events: USA Wrestling’s folkstyle events are all set for the 2017-2018 season. The Folkstyle tour of America will travel to Spokane, Castle Rock, Farmington, Tulsa and Wisconsin, with multiple events taking place all throughout the year in various categories. Dates to mark on your calendar are January 19th and 20th, 2018 and February 17th and 18th, 2018.

Senior World Championships: These will take place in 2018 and 2019. They will not take place in the year of the Olympics, 2020. So be sure to catch these events when you can.

Cheap wrestling tickets might be available with us for different events, though not very frequently. Fans of the sport are advised to check for cheap tickets here periodically. With loads of exciting wrestling events coming up in the near future, you have got to hurry to get your hands on these tickets. They are already running out fast!