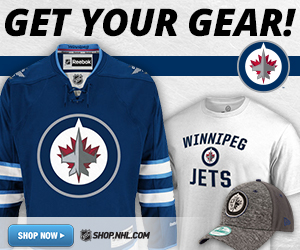 The Jets are back and have their sights set on bringing home a Stanley Cup trophy. Led by talented young core, Winnipeg is ready to take over the reigns in the Central Division. Division rivals, the Minnesota Wild and the Chicago Blackhawks will fight to halt the Jets aspirations.

Grab your Winnipeg Jets tickets and head down to the MTS Centre to help lead your favorite team to victory!

The Winnipeg Jets, as they are known today, were born when the Atlanta Thrashers moved to Winnipeg, Manitoba. The team played its first regular season in 2011. Since then, they have made it to the playoffs just once in the 2014-15 campaign where they were eliminated by the Anaheim Ducks in the First Round. In the 2016-17 season, the Jets failed to make it to the playoffs and finished fifth in the Central Division. In the most recent season, the Jets found much more success. They finished in second place in the Central Division and made it to the Conference Finals. Unfortunately they lost to the Vegas Golden Knights 4-1 and were unable to play for the Stanley Cup. But the Jets are back again and ready to take it all in the upcoming campaign, set to begin on October 4 against the St. Louis Blues.

Greatest moments in the history of the Winnipeg Jets

After their rebirth in 2011, the Winnipeg Jets have been trying to make a name for themselves in the NHL. They have also delivered many memorable moments over the past few years.

Here, we look at some of them.

Winning their first game – The Winnipeg Jets entered the ice rink in the 2011-12 campaign. The team lost the first three games of the season but it was a different story when they collided with the Pittsburgh Penguins in the fourth game. On October 17, 2011, at the MTS Center, it didn’t take long for the Jets to strike and they scored their first goal within eight seconds into the first period. Both teams scored after that but in the end, the Jets celebrated their first victory as they defeated the ‘Guins, 2-1.

Making it to the playoffs – After failing to qualify for the playoffs in the first three seasons, the Winnipeg Jets finally achieved this feat in the 2014-15 campaign. It was an unforgettable moment for their fans to watch their favorite team qualify for the postseason. However, the team couldn’t make it past the first round and was eliminated by the Anaheim Ducks.

The Winnipeg Jets have fierce rivalries with the Edmonton Oilers and the Minnesota Wild.

Jets-Oilers Rivalry – The rivalry between the Winnipeg Jets and the Edmonton Oilers goes back before the two teams joined the NHL. They played each other for the first time on October 15, 1972, when they were members of the World Hockey Association. Both teams later headed into the NHL as part of a four-team expansion in 1979. In the 80s, the Jets made it to the playoffs on eight occasions but almost every time their dreams of winning the Stanley Cup were shattered thanks to the Oilers who defeated them in 1983, 1984, 1985 and 1987. This intensified their rivalry

Jets-Wild Rivalry – The rivalry between the Winnipeg Jets and the Minnesota Wild is developing steadily and the media, to a certain extent, is responsible for it. The former coach of the Jets, Coach Claude Noel stated, We haven’t created a rivalry yet. It’s the potential, everybody talks about it, so it will get created, probably through the media.

In addition, both of these teams are members of the Central Division of the Western Conference. Another reason why this rivalry exists is because the Airforce and the Minny share a similar hockey culture. These two sides have not yet crossed paths in the playoffs.

How will this growing rivalry between the Jets and the Wild develop this year? Only time will tell.

Getting to know the Winnipeg Jets

The Winnipeg Jets were formed when the city of Winnipeg was granted one of the founding franchises of the WHA in 1971. The Jets were sold to American businessmen, Richard Burke and Hartford Whalers who decided to move the team to Manitoba. The plans were later changed and the team was relocated to Arizona and became the Phoenix Coyotes. In 1996, the original Winnipeg Jets played their last game.

The Jets however, were reincarnated when the Atlanta Thrashers moved to Winnipeg. It is owned by True North Sports & Entertainment and is being coached by Paul Maurice at the moment. The team plays its home games at the Bell MTS Place which was formally known as the MTS Centre.

There are many awesome new additions to MTS Centre – with restaurants and bars open 90 mins prior to gametime, the fun begins before the puck drops! For fans who want to learn more about hockey history, the Manitoba Hockey Hall of Fame and Museum is located on the main level of the arena.

Dale Hawerchuk was chosen first overall in the 1981 NHL Entry Draft. Dale remained with the team for almost a decade and during that time, he won the Jean Béliveau Trophy in 1981. Moreover, he clinched the CHL Player of the Year award in the same year. Hawerchuk also became the first player in the history of the NHL to reach 1000 NHL games before the age of 31. In his honor, the Jets retired his number 10 on April 5, 2017. He was inducted into the Hockey Hall of Fame in 2001.

Then, there is Bobby Hull. Often called The Golden Jet, he became the third hockey player to feature on the cover of Time Magazine. During his time with the Jets, he led the team to the Avco Cup Championships in 1976 and 1978. In addition, he was voted the WHA’s Most Valuable Player twice.

Catch the Jets in action!

The Winnipeg Jets haven’t won any major title throughout their history. They will now be heading into the upcoming season of the NHL with high hopes, coming off a great post season. The fans will be getting their Winnipeg Jets single game tickets to watch the team in action. Get yours too if you want to cheer for them live.

The last thing you want to find out is when the Winnipeg Jets event you wanted to go to is sold-out. Don’t worry in many cases ScoreBig has affordable tickets to sold out events. We sell tickets from GA all the way to premium seating and parking. Skip the scalpers in the parking lot and get your tickets online from top Winnipeg Jets ticket brokers. We get you in all events, buy your Winnipeg Jets tickets here from a brand that many trust and rely on for all their ticketing needs.

ScoreBig offers a 100% money-back guarantee. If you have been in search of cheap tickets for Winnipeg Jets, ScoreBig by far is the best option. That’s why ScoreBig has more loyal customers than any other ticketing site. Shop at ScoreBig for safe and secure Winnipeg Jets event tickets.