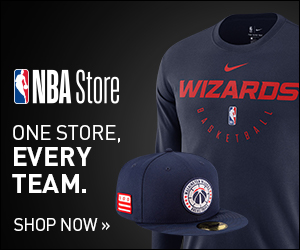 The Washington Wizards are once again counting on their young talented core. Point Guard John Wall will once again strengthen the backcourt and will get full support from Bradley Beal, who is considered one of the best shooters in the league. With the addition of Tim Frazier, Jodie Meeks, Devin Robinson, and Markieff Marris, the Wizards have done a good job of providing Wall with seasoned shooters. His ability to break through the opposition’s defense can keep the scoreboard ticking for the Wizards.

The Washington Wizards finished the 2017-18 regular season 43-39, qualifying them for the playoffs. The Wizards met the Toronto Raptors in the First Round of playoffs but unfortunately feel to the Raptors, losing the series 4-2.

The Wizards are ready to make some noise in the Eastern Conference. Led by a group of talented young players and hungry veterans, Washington has their sights set on reigning atop of the Southeast Conference and bringing home a NBA title. Division rivals, the Atlanta Hawks and the Miami Heat will fight to keep the Wizards down. Grab your Washington Wizards tickets and head down to the Capital One Arena to be a part of your team's home court advantage.

After the initial moderate success, the team became a championship unit in the 70s, riding on the shoulders of talented scorer Elvin Hayes and center Wes Unseld. The Wizards have so far reached 4 NBA Finals, winning once in 1978 and clinching 7 Division Championships. They have 4 Conference titles to their name.

1969-71 The Highest Scoring Team in Franchise History – The 1969-70 Bullets showed some incredible form, winning six games from their eight contests and recording their all-time-best winning streak. The duo of Wes Unseld and Earl Monroe gave the opposition a tough time, putting 120.7 points per game on the board. The following season (1971) came with their first division title as the Washington led the pack with a 42-40 record. The team hit its stride and advanced into the NBA Finals but despite Gus Johnson and Unseld’s superb performance, they lost 0-4 to the Milwaukee Bucks.

1978 The Glory Days – It remains the Washington Bullets’ best season. They not just reached the NBA Finals but also won it in a thrilling 4-3 battle against the Seattle SuperSonics. The 1978 finals witnessed a seesaw faceoff in which the Bullets were behind 3 games to 2 and in the final two games clobbered the SuperSonics. Wes Unseld was named the series MVP as he led the side to a 105-99 win in Game 7.

The Jordon Effect – Michael Jordan ended his retirement in 2000 to join the Wizards and his magic changed their fortunes. The team saw immense improvement under him and they managed to tie franchise record by winning 9 consecutive games from December 6 till 26. Washington Wizards Playoff tickets saw a huge boom and the team led the league in regular season attendance. 41 home games and 38 road trips were declared sold out. In 2003, Jordon once again bid farewell and became the only Wizard player to play in all of the 82 games and starting in 67.

In any sport, rivalries turn causal fans into diehard supporters. Fan base comes together when they have a common rival to root against. The Washington Wizards shared exciting rivalry with the New York Knicks but it died down in the 70s.

Wizards-Cavaliers Rivalry – The Wizards experienced intense showdowns with the LeBron James-led Cleveland Cavaliers. From 2006 to 2008, the Wizards had to cut short their playoff run at the hands of the Cavaliers. LeBron James spoiled their incredible playoff berths and neither the Wizards nor their fans have forgotten that.

Wizards-Pacers Rivalry – It’s more of a recent rivalry, resulting from both the sides giving each other a tough time in the Eastern Conference. For the first time in years, the Wizards are on the way to reach the NBA Finals and even win it. Convincing wins against the Indiana Pacers will determine their outcome in the division.

As the Baltimore Bullets, the team produced Hall of Famers like Wes Unseld, Walt Bellamy and Earl “The Pearl” Monroe. Unseld became the only player with Bullet jersey to be named the NBA MVP. These players made the Bullets a huge playoffs threat and took the side to four NBA Finals.

From 2004 till 2008, Gilbert Arenas, Antawn Jamison and Larry Hughes formed the Wizards incredible Big Three. Together the trio combined an average of more than 67 points per game in the 2004-05 season. They helped the side win its first playoff berth since 1997. Later Caron Butler joined the ranks of some of the best players to wear the Wizards red and blue uniform.

The current star of the team is John Wall, who is already considered one of the most talented point guards, not just for the Wizards but also in the league.

Since 1997, the Wizards have been playing their home games at the Capital One Arena. In the heart of the nation’s capital, just blocks from the National Mall, the Washington Monument and some of the most important museums on the planet, you’ll find the Capital One Arena. Fans can enjoy our rich global history and then enjoy a great night out with some Wizards basketball. What could be better?

The Washington Wizards are back in form and playing incredibly well on the shoulders of their captain Bradley Beal. His performance has improved by leaps and bounds and he’s ready to steer his side to some epic wins. Head out to the Wizards’ home arena to catch them live in action and check the schedule for their away games as well. Excited fans are already rushing for the game tickets and looking forward to cheer for their team in the arena.

The last thing you want to find out is when the Washington Wizards event you wanted to go to is sold-out. Don’t worry in many cases ScoreBig has affordable tickets to sold out events. We sell tickets from GA all the way to premium seating and parking. Skip the scalpers in the parking lot and get your tickets online from top Washington Wizards ticket brokers. We get you in all events, buy your Washington Wizards tickets here from a brand that many trust and rely on for all their ticketing needs.

ScoreBig offers a 100% money-back guarantee. If you have been in search of cheap tickets for Washington Wizards, ScoreBig by far is the best option. That’s why ScoreBig has more loyal customers than any other ticketing site. Shop at ScoreBig for safe and secure Washington Wizards event tickets.