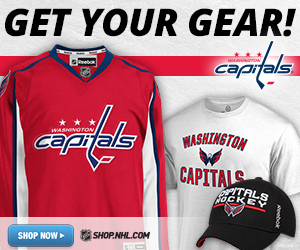 Founded in 1974, the Washington Capitals are a member of the Metropolitan Division of the Eastern Conference in the National Hockey League (NHL). Over the years, the Capitals have won one conference championship along with ten Division titles. This most recent season, the Capitols won their first Stanley Cup! Get excited for this next year of hockey to watch the Capitols defend their title.

In recent years, the new owner of the team, Ted Leonsis, has drafted several star players to the team, such as Alexander Ovechkin, Mike Green and Braden Holtby. The past few seasons have seen some of the most stellar performances by the Capitals. They finished the season as champions, beating the Vegas Golden Nights in the Stanley Cup Finals 4-1

And now, the Capitals are locked and loaded and are ready to put the NHL on notice this upcoming season. Led by a high octane offense, Washington aims to bring another Stanley Cup trophy home. Division rivals, the Boston Bruins, the Pittsburgh Penguins, and the New York Rangers will look to halt the Capitals aspirations.

Grab your Washington Capitals tickets and head down to the Capital One Arena to cheer your favorite team to victory!

The Dale Hunter Goal - For anyone who has been a fan of the Washington Capitals knows about the famous Dale Hunter goal. Dale Hunter scored a goal in the overtime of Game 7 against the Phildadelphia Flyers in the 1988 Patrick Division Semifinal series. Up until this iconic goal, the Caps had experienced nothing but heartbreak and utter disappointment in the playoffs. They had made it to the playoffs five times consecutively but each time they ran into the New York Islanders and lost. In the 1988 season, the Caps fell behind 3-0 in Game 7 against the Flyers. Incredibly, they managed to tie the game and take it into overtime. About six minutes into overtime, Hunter’s epic goal helped the team make a remarkable comeback.

Rivalries of the Washington Capitals

Among the many rivalries of the Washington Capitals, the two main ones are against the Pittsburgh Penguins and the Philadelphia Flyers.

Capitals vs. Penguins - Both these teams compete in the Metropolitan Division of the Eastern Conference. The rivalry developed from the ten playoff series between the two teams, with the Penguins being victorious in all, except one – the 1994 Eastern Conference Quarterfinals. What has further fuelled the rivalry is the emergence of the two major stars – Alex Ovechkin from the Washington Capitals and Sidney Crosby from Pittsburgh Penguins. The two teams have met a total of 279 times, with Pittsburgh leading in all time series records, 114-119-16.

Capitals vs. Flyers Rivalry - Both these teams compete in the Eastern Conference Metropolitan Division and have been fierce rivals since the founding of the Capitals in the 1974-75 season. The bad blood between the Capitals and the Flyers became worse in the 1980s as the Capitals became part of the Patrick Division. The rivalry was further renewed in the 2008 and 2016 seasons, since both the teams were well-matched and managed to reach the playoffs. The two teams have met a total of 211 times with Washington leading in the postseason results, 16-13. Due to the close proximity of the two cities, fans are able to travel to support their team in away games as well, making the stadium atmosphere super charged and loud every time.

Greatest Players of the Washington Capitals

The Caps have had many great players wear their uniform. Olaf Kolzig is one of them. He is, without a doubt, the greatest goaltender that the team has had. Olie the Goalie holds a very special place in the hearts of Caps fans. During the memorable playoffs run of the Caps, he went 12-9 with four more shutouts.

Another big name from this Washington side is Alexander Ovechkin. He is widely credited as the man who turned Washington in a hockey loving town. He is considered the perfect blend of speed, strength, skill and size. Three time winner of the Hart Memorial Trophy, Rookie of the Year in 2006 and ranking third in all time records among the Caps, in points and goals, there is no end to the greatness of Ovi.

Mike Gartner is not just a great player from the Washington Capitals, but one of the greatest in the NHL. He played more than nine seasons with the Caps and scored at least 30 goals in each of these seasons. His best season with the team was 1984-85, with 50 goals and 52 assists.

The Home Ground – The Capital One Arena

Your Capitals tickets get you inside this 20,000 venue in the heart of Washington DC. The Capital One Arena prime location allows fans to enjoy all the amenities downtown Washington has to offer, as the Smithsonian Art Museum, government institutions, and nightlife, before and after Caps' contests. This intimate arena provides for one the loudest venues in the league. Don't miss your chance at being part of one of the leagues best home crowds!

Grab your friends and buy Washington Capitals group tickets to follow your favorite team defend their Stanley Cup title! You don’t want to miss out on the Caps this season.

The last thing you want to find out is when the Washington Capitals event you wanted to go to is sold-out. Don’t worry in many cases ScoreBig has affordable tickets to sold out events. We sell tickets from GA all the way to premium seating and parking. Skip the scalpers in the parking lot and get your tickets online from top Washington Capitals ticket brokers. We get you in all events, buy your Washington Capitals tickets here from a brand that many trust and rely on for all their ticketing needs.

ScoreBig offers a 100% money-back guarantee. If you have been in search of cheap tickets for Washington Capitals, ScoreBig by far is the best option. That’s why ScoreBig has more loyal customers than any other ticketing site. Shop at ScoreBig for safe and secure Washington Capitals event tickets.