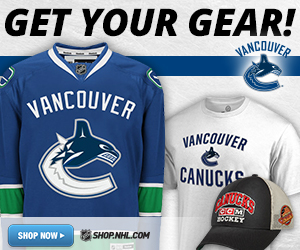 Vancouver Canucks are on the mend but plan on remaining competitive during their rebuilding phase. Missing three Stanley Cup Playoffs in the last four seasons, the Canucks made some significant moves during the offseason, acquiring veteran forward Sam Gagner. Another notable addition is Michael Del Zotto and these unexpected changes make Vancouver an exciting team to follow this season.

The Canucks are back and have set their sights high for this upcoming season. Led by a high powered attack, Vancouver is ready to take on the Pacific Division and bring home a Stanley Cup trophy. Division rivals, the Los Angeles Kings and the San Jose Sharks will fight to keep Vancouver down.

Grab your Vancouver Canucks tickets and help lead your team to championship glory.

Vancouver Canucks’ story officially started in 1945 with the Pacific Coast Hockey League (PCHL). In 1969, the Canucks were granted the status of the NHL expansion team and played their first game on October 9, 1970, against the Los Angeles Kings. Barry Wilkins made history for his team by scoring the first ever Vancouver Canucks goal. Even though the Canucks lost the game 3-1, it gave them confidence for their next meeting with the Toronto Maple Leafs, recording their first win with a 5-3 score. In their debut season in the NHL, the Vancouver Canucks managed 26 wins, 8 ties and 46 losses.

1982 Miracle Year – Vancouver Canucks of 1982 reached the playoffs as the underdogs. With gritty team play and hard work, the Canucks powered through to the Stanley Cup Finals. Goaltender Richard Brodeur peaked at the right moment giving his best performance at the right time. It was Vancouver Canucks against the New York Islanders in the 1982 Stanley Cup Finals and even though the Canucks lost the series 0-4, it remains their best year. It was nicknamed the Cinderella Run.

Pop band Steam’s Na Na, Hey Hey, Goodbye became their theme song that season and it was played all the time in the dressing room and even blared through the speakers in the arenas. In fact, the team became so superstitious that it was made their rally song and became a big part of their glorious journey.

1994 Stanley Cup Run – It was the franchise’s second appearance in the Stanley Cup Finals. The Canucks began the season with high expectations, especially since they were coming off consecutive Smythe Division Championships. Battling it out with the New York Rangers, it was a stupendous series. Games 2, 3 and 4 went to the Rangers and ahead of Game 5, Manhattan was poised for big celebrations. Only it didn’t happen. The Canucks bounced back, won two games in a row and set up a thrilling Game 7 at the Madison Square Garden. Despite an incredible effort, the Canucks fell short and the New York Rangers lifted the Cup.

2011 Stanley Cup Riot – Third appearance in the Stanley Cup Finals and it’s one that the Vancouver Canucks can never shake off their history. It was the Canucks against the Boston Bruins, and the latter won the series 4-3. Tied 3 games each, the final Game 7 was held at the Rogers Arena and the Bruins swept it 4-0. It’s what happened after the game that makes this season a memorable one – but not for good reasons. Immediately after the Bruins won, angered Canucks fans went on a rampage, torching cars, smashing windows and looting. It was a riot and took the police hours to get things under control.

The Vancouver Canucks have their share of rivals and while some have changed over the years, the most heated one remains with the Boston Bruins.

The Canucks-Bruins Rivalry – The rivalry began with the 2011 Stanley Cup Finals. The Boston Bruins not only ended the Canucks greatest season but they also won the final game without much sportsmanship. Fans still call foul on Bruins’ Brad Marchand punching Canucks alternate captain Daniel Sedin repeatedly. The rivalry was already bubbling and it didn’t help when the two teams met each other in 2012. It was their first game after the 2011 final and Brad Marchand once again made a move against a Canucks player. This time he clipped Sami Salo below the legs and caused a major stir. His mock celebration of lifting a cup to agitate the Canucks fans is also not forgotten.

The Canucks-Flames Rivalry – Calgary Flames are also known to boil Canucks blood. This rivalry seeds were sown in 1989 during the Stanley Cup Playoffs and Joel Otto’s goal in overtime that led the Flames to a historic win over the Canucks. The two teams haven’t met that often in the playoffs but when they do, it’s always exciting to watch.

Since the Vancouver Canucks joined the league in 1970, it has produced some of the best players in the NHL. Goaltender Kirk McLean deserves a special mention due to his incredible performance in the 1994 Stanley Cup Finals. He ended his run with the Canucks with 20 shutouts and 211 career wins.

Pavel Bure’s name is also on the Canucks 1994 roster and it was his electrifying playing style that took the team to Game 7 of the finals. For the Vancouver Canucks he remains one of their most skilled hockey players.

Vancouver Canucks first-ever captain Orland Kurtenbach was a leader on the ice. A fighter, he was known for his defensive abilities which earned him a Hall of Fame induction. Trevor Linden is another name that shines bright on the Canucks All-Time List.

The Canucks have been playing their home games at the Rogers Arena since the venue opened its doors in 1995. Located in the heart of downtown Vancouver, the Rogers Arena provides fans with a variety of pre and post game activities. With a brand new video and audio system inside the venue, you are guaranteed to never miss a second of the action.

NHL is out with its upcoming schedule and it’s the season that will see the epic rivalry between the Flames and Canucks reignite. Rogers Arena will host their encounters.

The Canucks are also set to take on the Edmonton Oilerss and Winnipeg Jets, all being highly anticipated games.

Fans will be desperately hoping to get Vancouver Canucks Single Game tickets.

The last thing you want to find out is when the Vancouver Canucks event you wanted to go to is sold-out. Don’t worry in many cases ScoreBig has affordable tickets to sold out events. We sell tickets from GA all the way to premium seating and parking. Skip the scalpers in the parking lot and get your tickets online from top Vancouver Canucks ticket brokers. We get you in all events, buy your Vancouver Canucks tickets here from a brand that many trust and rely on for all their ticketing needs.

ScoreBig offers a 100% money-back guarantee. If you have been in search of cheap tickets for Vancouver Canucks, ScoreBig by far is the best option. That’s why ScoreBig has more loyal customers than any other ticketing site. Shop at ScoreBig for safe and secure Vancouver Canucks event tickets.