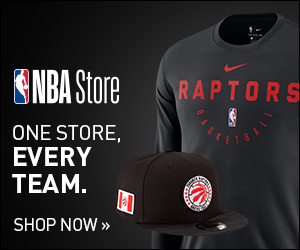 At ScoreBig, you’ll save on Toronto Raptors tickets, guaranteed. Plus with no fees and free shipping, we know you’ll score some awesome seats at a great price.

The Raptors are locked and loaded and ready to make some noise in the Eastern Conference. Led by a high powered offense, Toronto looks poised to reign atop the Atlantic division and bring home a NBA championship. Division rivals, Brooklyn Nets and the Boston Celtics will fight to keep the Raptors down.

Incepted in 1995, the Toronto Raptors are one of the youngest franchises in the NBA. They had a few hiccups during their initial years but made it to the playoffs for the first time in the 1999-2000 season. In the past three years, the Raptors have made great strides and have won three consecutive division titles in 2014, 2015 and 2016. In their most recent season, the Raptors finished the regular season number one in their Division and in the Eastern Conference with a record of 59-23. Toronto faced the Washington Wizards in the First Round and ended up beating the Wizards 4-2. Toronto then went head to head with Cleveland in the Conference Semifinals. The Raptors could not match up with Lebron James' team and lost the series 4-0.

The Toronto Raptors have never made it to the NBA Finals. They have been in good form of late and who knows this might be the year when they reach the top of the NBA. So, keep your hopes high and support them live from the stands by grabbing your Toronto Raptors tickets.

The Toronto Raptors have provided many memorable moments. Here are a few of those.

Making it to the Conference Finals for the first time – The 2015-2016 season was a memorable one for the Toronto Raptors. The team qualified for the postseason for the third time in a row and went on to defeat the Indiana Pacers, 4-3 in the First Round. They were up against the Miami Heat in the Conference Semifinals. After a hard fought series, the Raptors emerged victorious 4-3 to make it to their first Conference Finals. They came up short against the Cavaliers in the next round but not before delivering an unforgettable season.

Arch Rivals of the Toronto Raptors

The Toronto Raptors have rivalries with the Boston Celtics and the Brooklyn Nets.

Raptors-Celtics Rivalry – The Toronto Raptors and the Boston Celtics have recently developed a fierce rivalry. What makes this rivalry intense is that both sides are members of Eastern Conference Atlantic Division. Moreover, both sides began their rise to relevance almost at the same time. The Raptors began to make their mark in 2013, whereas the Celtics’ turnaround started in 2014. In addition, both sides also have long tenured coaches. This rivalry was fueled when the Raptors’ Jonas Valanciunas stated,

Raptors-Nets Rivalry – Bad blood between the Toronto Raptors and the Brooklyn Nets developed when Vince Carter was traded to the Nets in 2004. Then in the 2006-07 season, the Raptors were eliminated from the playoffs by the Nets. The rivalry between these two sides reached its peak when the Raptors were once again defeated by the Brooklyn Nets in the First Round of the playoffs of the 2013-14 campaign.

The Air Canada Centre is a multi-purpose arena and is home to not only the Toronto Raptors but also the Toronto Maple Leafs. Owned by, Maple Leaf Sports & Entertainment Ltd, the arena has hosted various concerts, political conventions and even video game competitions.

Vince Carter is one of the biggest names to have played for the Toronto Raptors. He was a member of the team from 1998 to 2004. He led the Raptors to a then-franchise high 47 wins in 2000-2001. They also recorded their first playoff series win that season and went all the way to the Eastern Conference Semifinals. Carter became a five-time NBA All-Star and was also selected in the NBA All-Rookie First team in 1999 as a member of the Raptors.

The second name on this list is that of Chris Bosh. He became a part of the Toronto Raptors’ roster in 2003 and remained with the team till 2010. During this time, he played in five NBA All-Star Games from 2006 to 2010. Bosh also won the Atlantic Coast Conference Men’s Basketball Rookie of the Year Award in 2003.

DeMar DeRozan joined the Toronto Raptors in 2009. DeRozan has showed his worth to the side by earning three NBA All-Star selections. He also made it to the All-NBA Team in 2017. DeRozan has a lot of talent and his stats prove that. The Raptors have a lot of faith in him.

How Much Are Season Tickets for Toronto Raptors

The Toronto Raptors are on fire and have been in an impressive form since the 2013-14 season. They have made it to the playoffs in the last four seasons and with the upcoming season on its way, they are looking good once again. The schedule for the next campaign is out now and if you want to see them live then get your tickets here.

The last thing you want to find out is when the Toronto Raptors event you wanted to go to is sold-out. Don’t worry in many cases ScoreBig has affordable tickets to sold out events. We sell tickets from GA all the way to premium seating and parking. Skip the scalpers in the parking lot and get your tickets online from top Toronto Raptors ticket brokers. We get you in all events, buy your Toronto Raptors tickets here from a brand that many trust and rely on for all their ticketing needs.

ScoreBig offers a 100% money-back guarantee. If you have been in search of cheap tickets for Toronto Raptors, ScoreBig by far is the best option. That’s why ScoreBig has more loyal customers than any other ticketing site. Shop at ScoreBig for safe and secure Toronto Raptors event tickets.