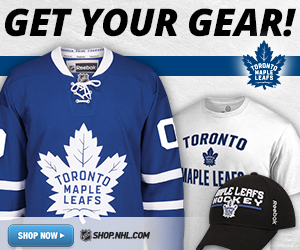 The Maple Leafs have their sights set on regaining hockey glory and bringing home another Stanley Cup trophy. Led by a talented core, Toronto seems determined to take home the Atlantic division crown. With healthy rivalries with both the Detriot Red Wings and the Buffalo Sabres, the upcoming season is sure to entertain at the Air Canada Centre.

Make sure to grab your Toronto Maple Leafs tickets and be a part of your team's championship run.

Toronto Maple Leafs current lineup boasts of energetic youngsters eager to prove their mettle on the ice. But lack of experience also means them needing training and guidance. Their recent performance has been full of pleasant surprises for the fans as well as the management.

The Maple Leafs made it to the playoffs for the past two years in a row which has given them new hope for the upcoming season. The upcoming season looks exciting and full of promise for the Leafs and if they continue with their form they will certainly end up as true Stanley Cup contenders.

First Stanley Cup Victory - The Toronto Maple Leafs won their first Stanley Cup in 1932. The history-making team had talented players such as Ace Bailey, Gentleman Joe Primeau, Hap Day, Charlie Conacher and King Clancy. The Rangers faced one of the best lineups in ice hockey and were defeated in three straight games in a best of five series. Dick Irvin was the proud coach of the Leafs and it was his second time in the Stanley Cup finals. Before the Toronto Maples he had led Chicago to the finals but that trip didn’t prove as lucky as with the Maples.

The 1967 Stanley Cup - The sixties marked an era of domination by the Maple Leafs in the league as the team won four titles between 1961 and 1967. Those were the good old times. But the year 1967 holds a lot of significance as it was the year with which came an end to their streak of victories. George Armstrong was the last captain to lift the coveted trophy and it was the last Stanley Cup of the original six era.

Old rivals - Montreal Canadiens - The rivalry between Montreal and Toronto has been old and intense. This rivalry dates back to 1917 and to this date it remains the NHL’s biggest rivalry. Be it post-season or regular season games between Montreal and Toronto, the contests are always fierce and entertaining. With both teams having won the Stanley Cup Championships several times, their games are mostly seen as Battle of the Champions. From 1944 till 1978, the two rivals have squared off in the playoffs 15 times and faced one other in five Stanley Cup Finals. Another reason for this intense rivalry is their history and the symbolic rivalry present between Canada’s two largest cities, Toronto and Montreal. The two cities with millions of residents give the teams’ two of the largest fan bases in Canada. The major cultural differences, as well as similarities between these fan bases intensify the rivalry and make the contests between them even more interesting.

The Ottawa Senators and the Toronto Maple Leafs

The Battle of Ontario - Dubbed the Battle of Ontario, it is one of the bitterest NHL rivalries between the Ottawa Senators and the Toronto Maple Leafs. The close proximity of the city along with their social and political landscapes is the reason for friction. And the heated playoff encounters in past seasons have only added to the bitter rivalry.

The fan bases of both the teams and players have hated one another and when the rivalry was at its peak it seemed no game would go without some kind of a brawl. Over the years the rivalry hasn’t remained as intense as before, but it is nevertheless fierce.

Today both teams compete in the Atlantic Division and meet four-to-five times per season. Ottawa and Toronto have met in the playoffs in 2000, 2001, 2002 and 2004. The Leafs ended up winning all four series.

Dave Keon was without a doubt one of the greatest player of Toronto Maple Leafs who was honored as an all-time NHL great. On October 2016, his No. 14 was retired by the Maple Leafs and Keon was voted the No. 1 player in franchise history. He was the winner of four Stanley Cups and remained one of the best players on ice till the end of his career.

Another player who left a big impact on the team was Syl Apps, he was a legendary Maple Leafs center. Though, he retired at the young age of 33, he made major contributions and won the team their first-ever Calder Trophy in 1937. He was admired for his character and his athleticism. His teammates respected his leadership skills. Apps remained Toronto’s captain for six seasons and led his team to three Stanley Cup Championships.

If you want to know how much are season tickets for Toronto Maple Leafs or are interested in the upcoming game then take a look at the schedule and book your tickets before they run out.

The last thing you want to find out is when the Toronto Maple Leafs event you wanted to go to is sold-out. Don’t worry in many cases ScoreBig has affordable tickets to sold out events. We sell tickets from GA all the way to premium seating and parking. Skip the scalpers in the parking lot and get your tickets online from top Toronto Maple Leafs ticket brokers. We get you in all events, buy your Toronto Maple Leafs tickets here from a brand that many trust and rely on for all their ticketing needs.

ScoreBig offers a 100% money-back guarantee. If you have been in search of cheap tickets for Toronto Maple Leafs, ScoreBig by far is the best option. That’s why ScoreBig has more loyal customers than any other ticketing site. Shop at ScoreBig for safe and secure Toronto Maple Leafs event tickets.