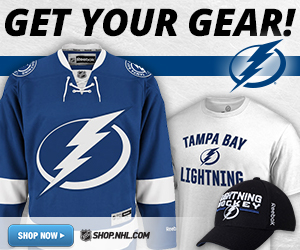 The Lightning are locked and loaded and have their sights set high for this upcoming season. Led by a youthful roster and a high powered offense, Tampa Bay is poised to take the reigns of the Atlantic Division and bring home another Stanley Cup. They will have to go through division rivals the Florida Panthers and the Detroit Red Wings on their pursuit of hockey immortality.

Grab your Tampa Bay Lightning tickets and head down to the Amalie Arena to be a part of your team's home ice advantage.

The Tampa Bay Lightning has been on a roll lately. Since its formation twenty five years ago, the team has appeared in the playoffs multiple times. They have also won two conference titles and one Stanley Cup. However, last season, the team couldn’t perform to their level and failed to qualify for the playoffs.

While the upcoming campaign of the NHL is quickly approaching, will The Bolts be able to find their lost form?

The Tampa Bay Lightning has experienced many ups and downs but there is no doubt that they have delivered some unforgettable moments along the way. Here are some of them.

Game 6 of the Stanley Cup Finals (2003-04 Season) - The stage was set for Game 6 of the Stanley Cup Finals at the Pengrowth Saddledome on June 5, 2004. The Tampa Bay Lightning was looking good as they locked horns with the Calgary Flames. The Flames were looking to win the series and were leading three games to two but then something miraculous happened. With both teams tied at two and just 33 seconds left till the end of second overtime, Martin St. Louis scored out of the blue and saved the day for the Lightning. This led to the decisive Game 7 between these two sides.

Stanley Cup comes home – The final game of the Stanley Cup Finals between the Tampa Bay Lightning and the Calgary Flames was held at the St. Pete Times Forum on June 7, 2004. The two teams gave it their all but in the end, it was the Lightning who lifted the Stanley Cup for the first time by winning, 2-1.

The Tampa Bay Lightning has had heated rivalries with the Florida Panthers and the New York Rangers.

Lightning-Panthers rivalry – The rivalry between the Tampa Bay Lightning and the Florida Panthers is an intense one. It stems from the fact both teams are located along Interstate 75. On top of that, these two teams have played in the same division since 1993 which has added another dimension to the rivalry.

Lightning-Rangers rivalry – Players like, Brad Richards and Dan Boyle have represented both teams which has formed the base of this rivalry. The intensity of the rivalry increased in 2014 when Martin St. Louis was signed by the New York Rangers while former Rangers captain Ryan Callahan went in the other direction as part of the same trade. It is a budding rivalry, one that many pundits think has the potential to reach new heights.

Often known as The Bolts, the Tampa Bay Lightning was founded in 1992. Jon Cooper is the team’s coach at the moment. The Lightning is owned by the chairman of Tampa Bay Sports and Entertainment, Jeffrey Vinik. The team’s home ice rink is the Amalie Arena.

Located in downtown Tampa Bay, Amalie Arena provides fans with a great night out. Boasting unique features like lightning-throwing Tesla coils, an 11,000 square-foot Bud Light party deck with incredible views of the city, and a massive five-manual digital pipe organ, the Amalie Arena provides fans with a five star, one of a kind, hockey experience.

Greatest players in the history of Tampa Bay Lightning

Nikolai Khabibulin is another star player whose journey with the Lightning began in 2001. During his time with the team, he was selected to appear in the All-Star Game in 2002. Moreover, his performance in the 2003-04 season is worth mentioning. He recorded five shutouts in 23 playoff games and led his team to their first Stanley Cup.

Then there is Steven Stamkos who has been with the team since 2008. He has not only appeared in four NHL All-Star Games but also won the Maurice Rocket Richard Trophy twice in 2010 and 2012. In addition, Steven also played in the World Cup of Hockey in 2016.

Catch all the action live!

Nothing comes close than watching the Tampa Bay Lightning play live. If you want to watch this team in action then all you have to do is grab Tampa Bay lightning playoff tickets.

It looks like the upcoming NHL season will be full of nail biting games.

The last thing you want to find out is when the Tampa Bay Lightning event you wanted to go to is sold-out. Don’t worry in many cases ScoreBig has affordable tickets to sold out events. We sell tickets from GA all the way to premium seating and parking. Skip the scalpers in the parking lot and get your tickets online from top Tampa Bay Lightning ticket brokers. We get you in all events, buy your Tampa Bay Lightning tickets here from a brand that many trust and rely on for all their ticketing needs.

ScoreBig offers a 100% money-back guarantee. If you have been in search of cheap tickets for Tampa Bay Lightning, ScoreBig by far is the best option. That’s why ScoreBig has more loyal customers than any other ticketing site. Shop at ScoreBig for safe and secure Tampa Bay Lightning event tickets.