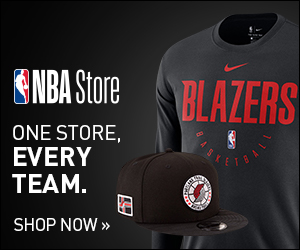 Founded in 1970, the Portland Trail Blazers are a professional basketball team from Portland, Oregon. The team competes in the National Basketball Association (NBA) as a part of the Western Conference Northwest Division. The home arena for the team was the Memorial Coliseum up till 1995, after which the team moved to the Moda Center. The team has always had a very strong fan following and had 814 consecutive sold-out games between 1977 and 1995. To this day, Portland Trail Blazers tickets sell out quickly. Such fandom can be attributed to the long list of successes that this team has enjoyed over the years. The Portland Trail Blazers have won one NBA Championship in 1977, three conference titles in 1977, 1990 and 1992 and five division titles in the years 1978, 1991, 1992, 1999 and 2015.

And now, this year, the Trail Blazers are back and are ready to make some noise in a highly competitive Western Conference. Led by a young talented core, Portland looks to keep pace in the Northwest Division and bring home a NBA championship. Division rivals, the Oklahoma City Thunder and the Minnesota Timberwolves will fight to keep the Trailblazers down. Grab your Portland Trail blazers tickets and head down to the Moda Center to be a part of your team's home court advantage.

The Trail Blazers have had quite an illustrious history. Let’s take a look at some of their best moments.

Winning the Championship: A championship victory would be a memorable moment for any team. In the final game against the Philadelphia 76ers, who had the home court advantage, the Trail Blazers managed to win four games and take the title home. Even though Portland’s appearance in the finals was somewhat of a surprise, they still managed to best one of the toughest teams in the entire league. The series started off strong for the Philadelphia side, who won the first two games, but over the next four games, Portland managed a comeback that few would have seen coming, sending their fans roaring with jubilation!

Roy Beats Washington at the Buzzer: On 19th March, 2010, Brandon Roy of the Portland Trail Blazers gave fans a moment to remember. Despite the fact that his statistics were far from amazing – fourteen points off 4-of-18, he managed to take a shot that counted the most. His last shot of the game. He completely nailed the leaning jumper, with just 0.9 seconds left on the clock, and gave Blazers a final score of 42-28. This shot proved to be one of the many buzzer-beaters for Roy during his subsequent career. The game, taking place at the Moda Center, was a true delight for all the home fans of the Portland side.

Rivalries of the Portland Trail Blazers

Los Angeles Lakers vs. Portland Trail Blazers: Whenever the Lakers come to town, a strong vibe hits the cool Portland atmosphere. The cheering gets louder and the booing gets more ruthless. Even though this rivalry still seems to be in a developmental stage, it has the potential of becoming one of the strongest and most followed rivalries in the game. The two teams have a close regular season wins record, with the Lakers leading with 118 wins and Portland trailing behind with 102 wins. What makes matters more interesting is that in the last ten regular season games between the two teams up till 26th March, 2017, the Trail Blazers have won every single game. Let’s see how the upcoming season unfolds for the two rivals.

Utah Jazz vs. Portland Trail Blazers: These two teams have had an underlying rivalry for a long time. For some reason, Portland has been the team that has always created obstacles for Jazz, going all the way back to the ‘80s and ‘90s. They ended any chances that Utah Jazz had of going to the Finals in the 91-92 season. The two teams have met a total of 181 times, with the Jazz leading with 98 wins.

The Portland Trail Blazers have a rich history, made possible by players who have always defied the odds and played to their level best.

Clyde Drexler is without doubt one of the most legendary players ever to have played from the Trail Blazers’ side. Known as “The Glide”, Drexler averaged more than 20 points in every game in almost all his seasons with the team. He was a true class act of his time, with amazing skills in terms of rebounding, stealing and passing, comparable only to those of Michael Jordan in 1990s.

Then there is Bill Walton. “Big Red” was the team’s main man during their 1977 NBA Championship win, with flawless scoring and rebounding abilities.

Terry Porter was truly the best point guard in the history of the franchise. He is No. 1 all-time at Portland in terms of three-pointers and assists. He has also been an honorable recipient of the J. Walter Kennedy Citizenship award.

Whether you are a Portland resident or visiting to support your team, the city will be a gracious host. With a hopping culinary and arts scene, a gorgeous, evergreen skyline and the most enthusiastic sports fans anywhere, Portland pretty much rules. Whether you're in town for a visit or you call Portland home, DO NOT MISS a chance to see the up-and-coming Trail Blazers this season at the Moda Center. Purchase your Blazer tickets here!