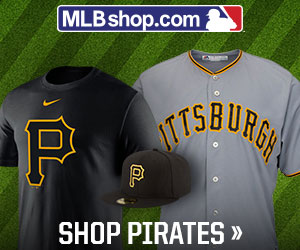 The Pittsburgh Pirates, also known as the Bucs were established in 1882 and joined the National League (NL) in 1887. They made an early impression when they won three back to back NL titles, from 1901 to 1903. The Bucs also have the distinction of playing in the inaugural World Series in 1903.

The Pirates won their first World Series in 1909 and since then have gone on to win four more World Series titles. Recently, the Pirates have consistently made the playoffs in the 2013, 2014 and 2015 MLB seasons. They however failed to qualify for the playoffs in 2016 and 2017 but with star players Starling Marte and Corey Dickerson, the Pirates can bounce back and make their return to the post season.

The four-time World Series Champions will look to build off of their recent success and contend for an NL Central crown and beyond. Pittsburgh's dynamic combination of hitting and pitching has them poised to compete with the Milwaukee Brewers and the Chicago Cubs for a division title.

Grab your Pittsburgh Pirates tickets and head down to PNC Park to lead your team on its championship hunt.

Unforgettable Moments from the Pirates’ History –

Being one of the oldest teams in the league, the Bucs have been part of some of the most historic moments in professional baseball history.

The Strange World Series – The 1960 World Series was played from October 5 to 13, 1960, between the Bucs and the New York Yankees. The last game of the series is still talked about to this day. Game 7, which was played on Forbes Field, became famous for Bill Mazeroski’s game-winning walk-off home run. The only time Game 7 of the World Series ended with a home run.

While Mazeroski’s homer was historical, the World Series was strange in two other aspects – Yankees, the losing team, scored more than twice as many runs as the Bucs. And Bobby Richardson, a Yankee, was named the series MVP, the only time in history that that award went to a member of the losing team.

We Are Family – The 1979 World Series was played between the Pirates and the Baltimore Orioles. The Pirates won the Series 4-3 and became only the 4th team in World Series history to come back from three games to one deficit to win the Series in seven games. Led by Pops Willie Stargell, the Bucs played under Sister Sledge’s anthem, We Are Family. To see the historical team with your own eyes purchase your Pittsburgh Pirates tickets today!

The Pirates-Phillies rivalry dates back to the 19th century and their intra-divisional rivalries with Reds, Cardinals, Brewers, and Cubs have produced some of the greatest moments in baseball.

Pirates-Phillies – This rivalry is still considered to be the best in the National League. Dating back to 1887, The Pittsburgh Pirates and the Philadelphia Phillies represent the baseball pride and ego of the Eastern and Western Pennsylvania.

Intra-Divisional Rivalries – The intensity of these rivalries depends upon a team’s competitiveness in a given season. Nevertheless, these rivalries have produced some of the greatest moments in baseball history such as Homer in the Gloamin’ and The Sausage incident.

The Greatest Pirates Ever –

Pittsburgh, for over a century, has been the home to some of the greatest Pirates in MLB history.

Willie Stargell – He played all 21 seasons with the Pirates. A baseball icon, Stargell, blasted 475 home runs and drove in 1,540 runs while batting .282 for Pittsburgh. He was also a seven-time All-Star.

Bill Mazeroski – A baseball prodigy, Mazeroski made his professional debut at the age of 19. In 2,163 career games, Mazeroski batted .260 with 2,016 hits. He was also a seven-time All-Star.

The Pittsburgh Pirates play their home games at the PNC Park. The ballpark was built in line with classic stadiums. PNC Park is made with the use of limestone.

Pirates tickets get you an insiders look at one of the most picturesque stadiums in baseball. There may be no greater sight than PNC Park's backdrop featuring the Alleghany River and the skyline of Pittsburgh. This 38,000 seat arena features a field level restaurant "Hall of Fame Club" that also offers live-concerts after Pirates' games.

If you are interested in watching the Pirates play in the upcoming MLB season and make the playoffs, then get your Pirates game tickets from here.

The last thing you want to find out is when the Pittsburgh Pirates event you wanted to go to is sold-out. Don’t worry in many cases ScoreBig has affordable tickets to sold out events. We sell tickets from GA all the way to premium seating and parking. Skip the scalpers in the parking lot and get your tickets online from top Pittsburgh Pirates ticket brokers. We get you in all events, buy your Pittsburgh Pirates tickets here from a brand that many trust and rely on for all their ticketing needs.

ScoreBig offers a 100% money-back guarantee. If you have been in search of cheap tickets for Pittsburgh Pirates, ScoreBig by far is the best option. That’s why ScoreBig has more loyal customers than any other ticketing site. Shop at ScoreBig for safe and secure Pittsburgh Pirates event tickets.