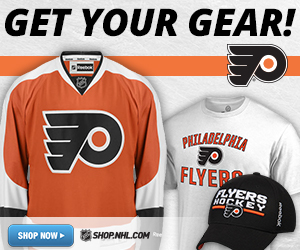 The Flyers are back and are looking to make some noise this upcoming season. Led by a hungry veteran core, Philadelphia has their sights set on bringing a Stanley Cup championship home. Division rivals, the Pittsburgh Penguins and the New York Rangers will look to prevent those aspirations.

Grab your Philadelphia Flyers tickets and head down to the Wells Fargo Center to cheer on your team and help bring home a championship.

For the past few years the Philadelphia Flyers have been going through some difficult times. In the 2016-17 season, the team let its fans down when it failed to make it to the playoffs. It was back in 2010 when they clinched their sixteenth Division Championship and since then, they haven’t won any major title. This most recent season the Flyers did make it to the playoffs but sadly lost to the Pittsburgh Penguins 4-2.

Will The Orange & Black be able to advance to the playoffs again? You will need your Philadelphia Flyers tickets to find out.

Some of the greatest moments in the history of Philadelphia Flyers

The Philadelphia Flyers have given plenty of unforgettable moments over the years and they are now part of history books.

Taking home the Stanley Cup twice in a row – Any fan of the Philadelphia Flyers will remember the team’s dominating performances in the 1973-74 and 1974-75 seasons. The Broad Street Bullies cross paths with the Atlanta Flames and the New York Rangers in the playoffs and defeated them both to face the Boston Bruins in the Stanley Cup Finals in the 1973-74 campaign. The Flyers dominated the series and won their first Stanley Cup at the Spectrum on May 19, 1994.

The Philadelphia Flyers carried their impressive form in to the 1974-75 season and met the Buffalo Sabres in the Stanley Cup Finals. Both sides played exceptionally well but in the end, it was the Fly Guys who won the series 4-2 and captured their second Stanley Cup in a row on May 27, 1995.

The Flyers Vs The Rangers Shootout – On April 11, 2010, the Philadelphia Flyers and the New York Rangers played each other to qualify for the Eastern Conference’s final playoff spot. The game went to shootout at the Wachovia Center (now the Wells Fargo Center in Philadelphia, Pennsylvania). The Rangers’ goaltender, Henrik Lundqvist was considered the favorite by many to win the shootout but it was the Flyers’ goaltender, Brian Boucher who earned his team a win over the Broadway Blueshirts.

The two biggest rivals of the Philadelphia Flyers are the Pittsburgh Penguins and the New York Rangers.

Flyers Penguins Rivalry – This rivalry between The Flyers and the Penguins is referred to as the Battle of Pennsylvania. Their rivalry began in 1967 when these two sides joined the NHL as part of the Next Six expansion wave. Moreover, they also play in the Commonwealth of Pennsylvania and have encountered each other in the Stanley Cup Finals three times in the past ten seasons. This has helped strengthen the Flyers Penguins rivalry.

Flyers Rangers Rivalry – The Flyers and the Rangers have one of the most storied rivalries in the NHL. Known as, Broadway versus Broad Street, the rivalry between the Philadelphia Flyers and the New York Rangers began in the 1974-75 season when the former defeated the latter in the semifinals. This marked the first time that an Original Six team was defeated by an expansion team in the playoff series.

The Flyers and the Rangers have played each other a total of eleven times so far in the Stanley Cup Playoffs out of which, The Orange & Black have won six while the Blueshirts have come out victorious in five games. They are both members of the Metropolitan Division of the Eastern Conference in the NHL. The latest game between the Philadelphia Flyers and the New York Rangers was played on April 2, 2017, which was won by the latter 4-2.

Where do the Flyers play their home games?

The Philadelphia Flyers joined the NHL in 1967. Since then, the team has gone on to win two Stanley Cups, sixteen Division crowns and eight Conference Championships. The Fly Guys are currently coached by Dave Hakstol and they play their home games at the Wells Fargo Center.

Steps away from both Lincoln Financial Filed, home of the Eagles and the Phillies' Citizens Bank Park, the Flyers and Sixers share the Wells Fargo Center. Opened in 1996 to replace the beloved Spectrum, the Flyers enjoy a massive home-ice advantage. From the moment the opposing line-up is announced at Wells Fargo Center, you know you can ONLY be in Philadelphia. Passionate Philly fans do their very best to ensure visiting players are as uncomfortable as possible.

Plenty of legends have played for the Philadelphia Flyers and Bobby Clarke’s name is at the top of the list. Clarke became part of the team in 1969 and remained with the Fly Guys till his retirement. He became the captain of the Flyers from 1973 to 1979 and led his team to two Stanley Cup wins in 1974 and 1975. Clarke also won three Hart Trophies and was inducted into the Hockey Hall of Fame in 1987.

Another player who stayed with the Flyers throughout his career is, Bill Barber. He played twelve seasons for the team. Barber was honored with accolades like, the Class Guy Award and the Jack Adams Award. He was also selected to play in the NHL First All-Star Team in 1976.

Brian Propp was also part of the team’s roaster. He started his career by playing for the Philadelphia Flyers in 1979. During his time with the team, he set multiple records including, most game winning goals in a single season, most goals in one game, most power play goals and most assists in a playoff game. In addition, Propp also won a NHL Clarence Campbell Bowl Trophy.

Get ready to watch the Philadelphia Flyers live!

The last thing you want to find out is when the Philadelphia Flyers event you wanted to go to is sold-out. Don’t worry in many cases ScoreBig has affordable tickets to sold out events. We sell tickets from GA all the way to premium seating and parking. Skip the scalpers in the parking lot and get your tickets online from top Philadelphia Flyers ticket brokers. We get you in all events, buy your Philadelphia Flyers tickets here from a brand that many trust and rely on for all their ticketing needs.

ScoreBig offers a 100% money-back guarantee. If you have been in search of cheap tickets for Philadelphia Flyers, ScoreBig by far is the best option. That’s why ScoreBig has more loyal customers than any other ticketing site. Shop at ScoreBig for safe and secure Philadelphia Flyers event tickets.