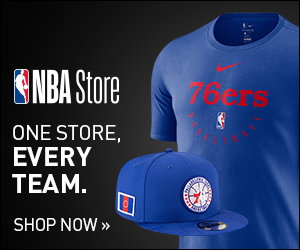 The Philadelphia 76ers, popularly known as the Sixers are one of the oldest franchises in the NBA. Having been founded in 1946, the franchise has had a rich history much of which was made by basketball legends, Wilt Chamberlain, Billy Cunningham, Charles Barkley, Moses Malone and Allen Iverson. Until this most recent season, the franchise had struggled with its last playoff appearance coming in the 2011-12 season. However, this all changed in the 2017-18 season. Joel Embiid, Ben Simmons and J.J. Redick helped their team clinch the third seed in the East by finishing the regular season 52-30. The Sixers face the Miami Heat in the First Round of the playoffs. Philadelphia easily handled Miami, winning the series 4-1. In the conference Semifinals, the Sixers met head to head with division rivals, the Boston Celtics. Philadelphia put up a good fight but ultimately fell to the Celtics, losing the series 4-1.

The Sixers are back and poised to make some noise in the Eastern Conference. With an up and coming roster, Philadelphia will look to put the pieces together and make some noise in the Eastern Conference. Check out the Philadelphia 76ers schedule to find out when the Sixers face up against division rivals, the Boston Celtics and the New York Knicks who seek to keep the Sixers out of the playoffs. Grab your Philadelphia 76ers tickets and head down to the Wells Fargo Center to cheer your favorite team to victory.

Most Memorable Moments in the Philadelphia 76ers Storied History

Being one of the oldest franchises, the Sixers have immensely contributed to the legacy of professional basketball in the City of Brotherly Love.

1977 Eastern Conference Championship– At the end of the 1976-77 NBA regular season, the Sixers were on a roll. They had won 50 games in the season and had stood 1st in their division as well as the conference. They then met the Celtics for the conference semifinals, which they won, 4-3. Advancing into the conference finals, the Sixers faced the Rockets, which were also beaten, 4-2. The Sixers were now in the NBA Finals, squaring against the Trail Blazers. They won the first two games. However, out of nowhere, the Trail Blazers mounted a comeback and won the next four games. The season however still remains a memorable one for everyone associated with the 76ers because this was their first conference championship win in ten years.

Speaking of some of the greatest rivalries in professional basketball, the Sixers – Celtics rivalry is one of the most well-known. In addition, the Sixers have storied rivalries with the Lakers and the Knicks.

76ers – Celtics –  This rivalry ranks just a notch below the historic Celtics-Lakers rivalry. The earliest dated rivalry in the league, the two teams have met for a total of nineteen postseason series, the most in the NBA playoffs. The Celtics lead the series, 12-7. The rivalry was started by none other than Wilt Chamberlain and Bill Russell of the Celtics. Over the years, this clash of titans has seen many ups and down, however with star players on both rosters, this rivalry is as fierce today as it was when it began.

76ers – Lakers – Both teams play in the Western Conference and therefore are each other’s biggest rivals. This rivalry was at its hottest point during the late 1970s and early 1980s, when Kareem Abdul-Jabbar and Magic Johnson were on one side and Moses Malone and Julius Erving were playing on the other half of the court. During this era, both teams met thrice in the NBA Finals, with the Lakers winning twice. The rivalry subsided for a while till Allen Iverson, Dikembe Mutombo, Shaquille O’Neil and Kobe Bryant appeared on the scene. Right now both teams are undergoing a rebuilding phase and therefore their rivalry, too, has cooled for now.

76ers – Knicks – This is a “geographical” rivalry, since both New York City and Philadelphia are situated on the East Coast, with close proximity which can be covered by car in 2 hours. This basketball rivalry is in line with both cities rivalry in the MLB – Mets – Phillies, the NFL rivalry of the Eagles and the Giants and the NHL rivalry of Flyers - Rangers.

Being one of the oldest teams in the league, the Sixers also boast one of the longest lists of basketball hall of famers, some of which are listed below:

Julius Erving – Popularly known as “Dr. J,” Erving in his 11 seasons with the teams made it to 11 All-Star teams. In 1981, he was awarded the prestigious MVP Award for averaging 24.6 points, 8.0 rebounds and 4.4 assists per game. He was the Vince Carter and LeBron James of his time.

Wilt Chamberlain – Chamberlain was Philadelphia’s favorite son. From 1965-68, he won three MVP Awards. He led the Sixers in the 1966-67 season, when the team won 68 games and won its second NBA Championship against the Warriors.

Allen Iverson – Iverson’s flashy lifestyle and gaudy chains were overlooked in Philadelphia when in 2001 he averaged 31.1 points and 2.5 steals per game to won the MVP Award. He led the 2001 Sixers all the way to the NBA Finals. He may have never won the NBA Championship in Philadelphia, but he was a 6-time All-Star and a 7-time All-NBA player.

With Philadelphia 76ers season tickets in hand, you may not only see your favorite team play in the playoffs for a championship ring, but also experience what the City of Brotherly Love has to offer to its visitors.

Philadelphia is a great city that is known for its passionate sports fans. Every Sixers game, the visiting team is reminded of that home court advantage. Don't miss your chance to be a part of one of the league's most hostile environments at the Wells Fargo Center . Get Sixers tickets before you head to Philly to see how far this team will last in playoffs.

The last thing you want to find out is when the Philadelphia 76ers event you wanted to go to is sold-out. Don’t worry in many cases ScoreBig has affordable tickets to sold out events. We sell tickets from GA all the way to premium seating and parking. Skip the scalpers in the parking lot and get your tickets online from top Philadelphia 76ers ticket brokers. We get you in all events, buy your Philadelphia 76ers tickets here from a brand that many trust and rely on for all their ticketing needs.

ScoreBig offers a 100% money-back guarantee. If you have been in search of cheap tickets for Philadelphia 76ers, ScoreBig by far is the best option. That’s why ScoreBig has more loyal customers than any other ticketing site. Shop at ScoreBig for safe and secure Philadelphia 76ers event tickets.