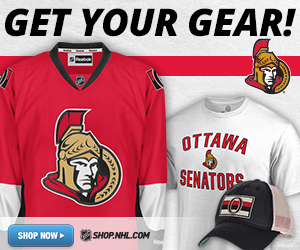 The present-day Ottawa Senators are actually the second reincarnation of the original Ottawa Senators. The original franchise was founded in 1883 and had an illustrious history, including 11 Stanley Cups. The Senators today while not as successful as their predecessors, have nevertheless appeared in one Stanley Cup Final.

The Senators are ready to make some noise in the Atlantic division. Led by a talented young core, Ottawa hopes to make a deep run into the playoffs and bring home a Stanley Cup. They will look to overcome rivals the Buffalo Sabres and the Boston Bruins on their pursuit for NHL greatness.

Get your Ottawa Senators tickets and be a part of your team's championship hunt.

Founded in 1992, the Ottawa Senators are a relatively younger team in the NHL. Nevertheless, they have played some of the most memorable games in the history of the league.

Senators Vs. Sabres – It was Game 5 of the 2007 Eastern Conference Finals. The afternoon game on May 19, 2007, at the HSBC Arena, seemed like just another game between the two, until the end. Daniel Alfredsson crossed the Sabres’ blue line in a one on three faceoff and quickly snapped a seemingly harmless shot past Ryan Miller for the biggest goal in the history of the franchise. It was one of those goals that every Senators’ fan still talks about. The Senators won the encounter 3-2.

Sabres Vs. Senators – On April 12, 1997, the Senators were only 5 years old and yet they clinched their first playoff spot. To be fair, the Senators were playing at home, Corel Centre, but against one of the greatest goalies of all time, Dominik Hašek. Those who were present at the arena heard the biggest roar from the Senators the moment puck slipped by Hašek in the third period. The Senators defeated the Sabres 1-0.

Devils Vs. Senators – Though the Senators were the underdogs in this game, but on May 2, 1998, at the Corel Centre, the day belonged to goalie Damian Rhodes and Alexei Yashin. With some incredible goaltending by Rhodes and a strong series by Yashin, the Senators were able to pull off the upset and win the first playoff series. The goal by Igor Kravchuk in the third period is still etched in every Senators’ fans’ mind. The Senators won the game 3-1.

The Senators two biggest rivals are the Toronto Maple Leafs and the Buffalo Sabres. Both of these teams are also members of the Eastern Conference Atlantic Division.

Battle of Ontario – Since both teams are based in Ontario, the Ottawa Senators and the Toronto Maple Leafs rivalry is called the Battle of Ontario. Largely a regular-season rivalry, the two teams have also met in the playoffs. The Maple Leafs, being a much older and successful franchise, has the upper hand in this rivalry.

The Greatest Senators Ever –

Daniel Alfredsson – Having played almost all his professional career with the Senators when Alfredsson retired, he held the franchise record for most goals, points and assists. At the height of his career, Alfredsson captained the Senators to the Stanley Cup Finals in 2007.

Erik Karlsson – Senators’ current captain, Erik Karlsson is considered to be one of the best offensive defensemen in the league. He is also a four-time All-Star player.

As mentioned earlier, during the 2016-17 season, the Senators came close to having another shot at the coveted Stanley Cup. After finishing second in their division at the end of the regular season, the Senators qualified for the playoffs. In round one, they defeated the Boston Bruins 4-2. During the second round, they defeated the New York Rangers 4-2 and qualified for the Conference Finals. However, the Senators were defeated by the Pittsburgh Penguins 3-4. The Penguins would go on to win the Stanley Cup.

The Senators are however all-set to take on their traditional rivals in the upcoming NHL season. Under the leadership of Erik Karlsson, one of the best players in the league, the Ottawa Senators promise to play some exceptional ice hockey.

For fans looking to get up close and personal to Senator hockey, the Canadian Tire Centre is the place to be. The arena provides fans with great views and the acoustics allow for a genuine home ice advantage!

If you are looking for Ottawa Senators single game tickets, then get them here.

The last thing you want to find out is when the Ottawa Senators event you wanted to go to is sold-out. Don’t worry in many cases ScoreBig has affordable tickets to sold out events. We sell tickets from GA all the way to premium seating and parking. Skip the scalpers in the parking lot and get your tickets online from top Ottawa Senators ticket brokers. We get you in all events, buy your Ottawa Senators tickets here from a brand that many trust and rely on for all their ticketing needs.

ScoreBig offers a 100% money-back guarantee. If you have been in search of cheap tickets for Ottawa Senators, ScoreBig by far is the best option. That’s why ScoreBig has more loyal customers than any other ticketing site. Shop at ScoreBig for safe and secure Ottawa Senators event tickets.