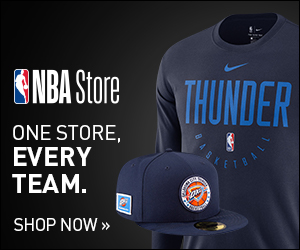 The Thunder are locked and loaded and have their sights set high for this upcoming season. With a highly talented young roster, Oklahoma City is poised to reign supreme in the Northwest division and bring home an NBA championship. Division rivals, the Portland Trail Blazers and the Minnesota Timberwolves will stand in the Thunder's way. Get your Oklahoma City Thunder tickets and head down to Chesapeake Energy Arena to be apart of your team's run at a championship!

Things have been looking up for the Oklahoma City Thunder as of late. They have made it to the playoffs the past three seasons and won the division title in 2016. Now that they have tied last year’s NBA MVP, Russell Westbrook, to a new long term deal, all the pieces are beginning to fall in place. The arrival of Paul George has added to the expectations too. The latest NBA season promises to be a cracking one for the franchise and you can be a part of the ride as well.

The Oklahoma City Thunder have given their fans plenty to cheer about over the years and here are a few of those most memorable moments.

The 1979 NBA Championship- The 1978-1979 season was an unforgettable one for the Oklahoma City Thunder, known as the Seattle SuperSonics back then. They had won their first conference title the previous season but had lost to the Washington Bullets in the NBA Finals, 4-3.

The SuperSonics had finished the 1978-1979 season at the top of the Pacific Division with a 52-30 record. They came up against the Los Angeles Lakers in the Conference Semifinals and won, 4-1. The Phoenix Suns were up next in the Conference Finals and the SuperSonics beat them 4-3 to set up a meeting with the Bullets once again for the biggest prize in the NBA. The Sonics came out on top 4-1 to clinch their inaugural NBA title and avenge the previous season’s loss in emphatic fashion.

It turned out to be a cracking series that had two overtime encounters, both won by the Thunder. The series was tied 3-3 after Game 6 and it was all or nothing for both sides in Game 7 at the Ford Center. The Thunder won the clash 105-90 on May 15, 2011 to make it to their first Conference Finals since re-location.

The Thunder-Mavericks Rivalry- The Oklahoma City Thunder and the Dallas Mavericks have developed a rivalry of late. The Thunder made the move to Oklahoma City in 2008 and came up against the Mavericks in the playoffs for the first time in Conference Finals in the 2010-2011 playoffs. The Mavs won the series, 4-1. These two sides came up against each other once again in playoffs once again the next year and this time the Thunder won 4-0 in the First Round. The Thunder beat the Mavericks in the third playoff meeting in 2015-2016 4-1 in the First Round once again. Things are heating up between these two sides for sure.

The Thunder-Warriors Rivalry- This is a developing rivalry between the Oklahoma City Thunder and the Golden State Warriors. The animosity between the two sides really began just a year ago when Kevin Durant jumped ship and moved to the Warriors. Durant won on his first trip back to the Chesapeake Energy Arena, but he received a lot of flak from the Thunder fans. Now that Russell Westbrook is hitting his peak with the Thunder, many people think that the rivalry between these two sides is going to escalate.

The New Orleans Hornets also played their home games at the arena for two seasons (2005-06 and 2006-07) due to the devastation caused by Hurricane Katrina. On top of that WWE and UFC events have also taken place at the Chesapeake Energy Arena.

With one of the most passionate fan bases in the league, Thunder games are the place to be for a one of a kind basketball experience. Thunder fans show up to every game and are loud no matter who the opponent is. Get your tickets now and be apart of "The Whiteout" and keep Chesapeake Energy Arena one of the loudest in the NBA!

The Oklahoma City Thunder fans have seen plenty of great names turn up for their favorite side. Kevin Durant is one of them. He was part of the Thunder roster from 2007 till 2016 and won his only NBA MVP Award in Oklahoma City. He also earned seven All-Star selections and won the NBA All-Star Game MVP as a member of the Thunder.

Gary Payton played for the Seattle SuperSonics between 1990 and 2003. During that time, he became a nine time NBA All-Star and was selected twice for the All-NBA First Team. Payton also won the NBA Defensive Player of the Year Award once in Seattle and has now been inducted into the Basketball Hall of Fame too.

Currently it is Russell Westbrook who is leading the charge for the Thunder. He won the NBA MVP award in 2017 and is a six time NBA All-Star too. He also won two NBA-All Star Game MVP awards in 2015 and 2016 and was the NBA scoring champion in 2015 and 2017.

The NBA season schedule is out and the Thunder fans are very excited to see their side in action once again. Oklahoma City Thunder season tickets and regular tickets are in demand because fans know their side is on the cusp of something very special. It promises to be a cracking campaign and you can be a part of the ride every step of the way.

ScoreBig offers a 100% money-back guarantee. If you have been in search of cheap tickets for Oklahoma City Thunder, ScoreBig by far is the best option. That’s why ScoreBig has more loyal customers than any other ticketing site. Shop at ScoreBig for safe and secure Oklahoma City Thunder event tickets.