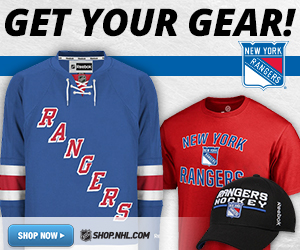 The Rangers are locked and loaded and have big hopes for this upcoming season. Led by great goaltending and a young and up and coming core, the Rangers sights are set on bringing a Stanley Cup trophy home. Division rivals, the New York Islanders and the Washington Capitals will look to spoil the Rangers plans.

Get your New York Rangers tickets and come down to historic Madison Square Garden to cheer your team to a championship victory.

In the 2016-17 Season of the NHL, the New York Rangers fans saw their team qualify for the playoffs. They won the first round of the Stanley Cup playoffs against the Montreal Canadians 4-2, but were later eliminated when the Ottawa Senators defeated them in the second round. Unfortunately in the 2017-18 season, the Rangers did not make the cut for the playoffs.

While there is little time left for the next season of the NHL to start, will the Rangers be able to return to their winning ways is a question all hockey fans are asking.

The New York Rangers is one of the oldest teams in the NHL. Their career is highlighted by many great moments which are now etched in history. Let’s take a look at some of them.

Lifting the Stanley Cup for the first time - In the 1927-28 season of the NHL, the New York Rangers proved to be unstoppable. The team made it to the playoffs and won their quarterfinal and semifinal games against the Pittsburgh Pirates 6-4, and the Boston Bruins 5-2, respectively. They later qualified for the Stanley Cup Finals and met with the Montreal Maroons. The two teams gave it their all and scored 2 victories each against one another. The decisive game between these two sides was played on April 14, 1928, at the Montreal Forum. The Rangers won that bout and lifted the Stanley Cup for the first time in their history.

The 1994 playoffs - Magicalis how the Rangers fans would describe the 1994 playoffs. The New York Rangers dominated the 1993-94 season and went on the road to the Stanley Cup Finals after fifty four years. They played the Vancouver Canucks for the top prize and won the decisive game of the series at the Madison Square Garden on June 14, 1994.

Rangers-Devils Rivalry – The New York Rangers have a fierce rivalry with the New Jersey Devils. Often called the cross-river rivals, these two teams play in the New York City metropolitan area and are members of the Eastern Conference. The Rangers and the Devils met each other for the first time on October 5, 1982, in a seven game Patrick Division semifinal series which was won by the Rangers. They both recently locked horns on March 21, 2017, where the Devils defeated the Rangers.

Rangers-Islanders Rivalry – The rivalry between the New York Rangers and the New York Islanders is highly intense mainly because these two teams represent the same city. Both teams are from the same division due to which they cross paths multiple times each season. The Rangers and the Islanders last collided on March 22, 2017, with the Islanders winning the game, 3-2. In 2017, the Rangers are ahead in head to head contests against the Islands with 45 wins and 35 losses.

Established in 1926, the New York Rangers have had players like Jean Ratelle. Named as one of the, 100 Greatest NHL Players in history, Ratelle began playing for the Rangers in 1960 and stayed with the Broadway Blueshirts till 1975. The team is now going to retire No.19 jersey in his honor during the 2017-18 campaign.

Mike Richter is another big name who remained with the New York Rangers from 1989 to 2003. During his time, he won many accolades like, Frank Boucher Trophy for Most Popular Player on and off Ice and Lars-Erik Sjoberg Award for Best Rookie of Training Camp. Moreover, he also won the Player’s Player Award twice in 1991 and 2000.

Other than these players, stars like, Bill Gadsby, Phil Esposito, Art Coulter, Pavel Bure and Rod Gilbert have also played for the Rangers. All of these players have been inducted into the Hockey Hall of Fame.

New York Rangers tickets get you inside one of the most iconic sports venues in the world. Madison Square Garden is an ideal location to catch a hockey game. Located in the heart of New York City, fans are able to enjoy all that the city has to offer at the Empire State Building and Penn Station before and after Rangers games.

Get out to MSG to see the New York Rangers take the next step on their road to victory.

You will find out by getting your New York Rangers playoff tickets. Grab them now before it’s too late.

The last thing you want to find out is when the New York Rangers event you wanted to go to is sold-out. Don’t worry in many cases ScoreBig has affordable tickets to sold out events. We sell tickets from GA all the way to premium seating and parking. Skip the scalpers in the parking lot and get your tickets online from top New York Rangers ticket brokers. We get you in all events, buy your New York Rangers tickets here from a brand that many trust and rely on for all their ticketing needs.

ScoreBig offers a 100% money-back guarantee. If you have been in search of cheap tickets for New York Rangers, ScoreBig by far is the best option. That’s why ScoreBig has more loyal customers than any other ticketing site. Shop at ScoreBig for safe and secure New York Rangers event tickets.