New York Jets Tickets | New York Jets | ScoreBig.com
ScoreBig is a resale marketplace. Ticket prices may be above face value.
Ashburn, VA, US
All Dates
X
Sorry, there are no events. 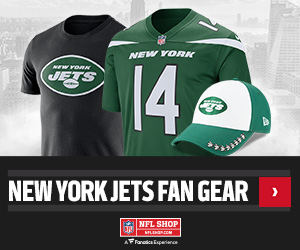 The New York Jets finished the 2017 NFL season at 5-11, a disappointing record for Jets fans. They had narrowly missed the playoffs (10-6) in 2015 after which the team was determined to make a playoff push last year. Things seemed to be in place for the Jets after they signed Ryan Fitzpatrick. He had broken the Jets record for most touchdown passes (31) in a single season. However, his performance was far from impressive in the previous season and ended up signing with the Tampa Bay Buccaneers for the 2017 season.

However, after hitting a recent rough patch, the Jets are back and have their sights set on an AFC East title. Led by a versatile defense, New York is ready to compete with the powerhouses of the AFC. They will look to become the top team in New York over the New York Giants and have to go through rivals the Buffalo Bills and the New England Patriots to regain division glory.

Grab your NY Jets tickets and head down to MetLife Stadium to witness your team's attempt to bring a championship home.

In their 57 years of existence, the New York Jets have endured a number of losing seasons. But there have been some pleasant moments as well. Ones Jets fans fondly look back at. Shared below are a few of them.

The 1969 Super Bowl Win - The Baltimore Colts won 13 out of their 14 games in the 1969 season and made the playoffs. They were the clear favorites over New York Jets (of the AFL) to win Super Bowl III. But quarterback Joe Namath of the Jets boosted his team’s morale by telling a group of reporters that the Jets would win the title. And he did as promised. His role was pivotal in taking his team to a 16-0 lead through the three quarters. The Jets’ 16-7 Super Bowl win at the Orange Bowl on January 12, 1969, is regarded as the greatest upset in professional sports. It brought legitimacy to the AFL and led to the merger of the two leagues (NFL & AFL) in 1970.

A Monday Night Miracle - On October 23, 2000, the New York Jets squared off with the Miami Dolphins at the Giants Stadium in an NFL Monday night game which later came to be referred as the Monday Night Miracle. The Dolphins held a 30-7 lead heading into the fourth quarter when quarterback Vinny Testaverde made a comeback. He led New York to score a whopping 30 points in the fourth quarter. This sent the game into overtime in which the Jets defeated the Dolphins (40-37).

Nothing is more exciting for Gang Green fans than when they are pitted against teams they share an intense rivalry with. Among their top rivals are.

New England Patriots - The rivalry between the Jets and Patriots reached its pinnacle because of a coach. And he is none other than Bill Parcells. He left New England following a very successful 1996 season and took over as head coach for the Jets. The move caused a great deal of animosity between Parcells and the Jets - Parcells for having betrayed the Patriots and Jets for having stolen their coach.

Hence it can be said that the role of coaches has been central to the two sides’ rivalry.

New York Giants - The Jets and the Giants are rivals owing to the city they share. Both represent the same New York/New Jersey area and their homes are only 30 miles apart. They also share the MetLife Stadium and can easily bump into one another if they show up on the wrong Sunday.

When two sides belong to the same state and same region, there is bound to be competition and rivalry. However, since they play as part of different conferences, they only get to play each other during the regular season (which is once every four years when all four NFC East teams play all four AFC East teams).

Over the last six decades, there have been a number of players who are responsible for producing memorable moments for Jets fans.

Joe Namath - The legendary quarterback certainly tops the list when talking about the best Jets of all-time. He became part of the team in 1965 and just before Super Bowl III, he guaranteed the win against the heavily favored Baltimore Colts. After the Jets’ surprising win, Joe became known as Mr Jet. In his 12-year stint with the Jets, Namath scored 173 touchdowns and completed 1,886 passes for 27,057 yards.

Curtis Martin - One of the best decisions the Jets ever made was acquiring Curtis Martin who previously played for the Patriots. As a Jet, Martin continued to rush for more than 1,000 yards every season except for his last. This places him above other New York Jets Running Backs such as Emerson Boozer, Freeman McNeil and Matt Snell.

Martin retired as the fourth leading rusher in the history of the league. In 2012, he was also inducted into the Pro Football Hall of Fame.

The schedule for the New York Jets preseason is out. Fans are anxiously looking forward to their games with teams such as the Philadelphia Eagles, Buffalo Bills and Oakland Raiders.

In a recent game against the New York Giants, Bryce Petty replaced Christian Hackenberg to start the second half. He compiled a perfect passer rating (158.3) as he completed 15 of 18 passes for 250 yards. Petty is competing with Josh McCown and Hackenberg for the starting Quarter Back job.

If you want to catch your favorite players battle it out live, then hurry up and purchase your New York Jets preseason tickets before they run out.

The last thing you want to find out is when the New York Jets event you wanted to go to is sold-out. Don’t worry in many cases ScoreBig has affordable tickets to sold out events. We sell tickets from GA all the way to premium seating and parking. Skip the scalpers in the parking lot and get your tickets online from top New York Jets ticket brokers. We get you in all events, buy your New York Jets tickets here from a brand that many trust and rely on for all their ticketing needs.

ScoreBig offers a 100% money-back guarantee. If you have been in search of cheap tickets for New York Jets, ScoreBig by far is the best option. That’s why ScoreBig has more loyal customers than any other ticketing site. Shop at ScoreBig for safe and secure New York Jets event tickets.