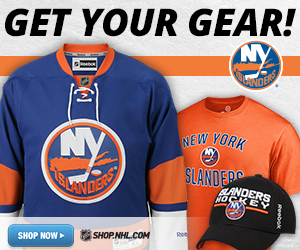 Founded in 1972, the New York Islanders compete in the Metropolitan Division of the Eastern Conference in the National Hockey League (NHL). The Islanders are one of the three hockey franchises in the New York metropolitan area – the other two being the New Jersey Devils and the New York Rangers.

The New York Islanders have a truly stunning history with four consecutive Stanley Cups, 6 Conference Championships and 6 Division Championships to their name. However, due to financial strains and ownership concerns, the team’s performance has gone down in recent years.

Even though the Islanders missed the playoffs last season, it was a very close call. This year, the team is planning to come into the season with all guns blazing, under head coach Doug Weight and captain John Tavares.

Keep an eye out for the New York Islanders tickets so you don’t miss out on any of the action.

Al Arbour’s 1500th Game - The legendary Hall of Famer coach of the Islanders, Al Arbour, came out of retirement in 2007 to coach his 1,500th game. He was invited by Ted Nolan to coach the game between the New York Islanders and the Pittsburgh Penguins at the Nassau Coliseum on November 3, 2007. And as expected, Arbour managed to lead his side to a 3-2 victory. It was his 782nd career victory and his 740th with the Islanders. This epic game received a lot of coverage and is a moment that many Islanders fans hold dear.

Bryan Trottier’s 8 Points against the Rangers -The much-hated Rangers team got a strong dose of the Islanders, thanks to a legendary game by Bryan Trottier. The game took place at the home ground of the Islanders on December 23. 1978. Bryan Trottier recorded a franchise-record eight points thanks to his amazing five goals, along with three assists, leading to a decisive 9-4 victory – truly a memorable game.

Rivals of the New York Islanders

For the Islanders, their biggest rivals are without a doubt, the New York Rangers.

Islanders – New York RangersRivalry (The Battle for New York) - Since both teams play in New York City, this rivalry was bound to happen sooner or later. They play several games against each other every season, which keeps the fire between them alive. They have met a total of 341 times, with the all-time series record tipped in the favor of the Rangers (163-159-19). The postseason results however are in favor of the Islanders at 20-19. The biggest margin of victory was 10-2, with the Islanders winning the game. This rivalry has been one of the most entertaining in the NHL with various incidents and fights taking place over the years – and even a Chicken Dance and The Rangers Suck song that became famous when the Rangers could not make it the playoffs between 1997-98 and 2003-04.

Over the years, the Islanders have had many great players on their roster. Denis Potvin is, without a doubt, the best defenseman the team has ever had, along with being the best player. He delivered amazing hits and has 1,052 points to his name in a staggering 1,060 games. The only other defenseman in the entire NHL to have a better record is Bobby Orr.

Mike Bossy is another big name in the team’s roster. He scored 73 more goals than Bryan Trottier with 371 fewer games. In his final year with the Islanders alone, he scored 38 goals and 75 points. Bryan Trottier is nonetheless, one of the greatest players the team has seen. He has played the most games with the team at 1,123 and ranks at number two with 500 goals. In his 15 seasons with the New York Islanders, he had four stellar seasons with 40 or more goals and six seasons with an impressive 100 points or more.

This year, the Islanders will be playing from their new home arena, where they moved to after the 2014-15 season. Your Islanders tickets grant you access to hockey in this brand new state of the art facility. Opened in 2012, the Barclays Center provides fans with a first class game-day experience and being situated in the heart of Brooklyn makes it very easy to access the amenities of New York City and Brooklyn before and after Islanders' games.

This Islanders are locked and loaded and are ready to make some noise this upcoming season. Led by young and up and coming core, the Islanders have their sights set on bringing home a Stanley Cup trophy. Division rivals, the New York Rangers and the Washington Capitals will look to stand in the Islanders way.

Grab your NY Islanders tickets and head down to their new home, the Barclays Center, and cheer your favorite team to Championship victory.

Whether it is the New York Islanders playoff tickets or regular season tickets, you have got to get your hands on them as early as possible! The upcoming season is surely not meant to be missed.

The last thing you want to find out is when the New York Islanders event you wanted to go to is sold-out. Don’t worry in many cases ScoreBig has affordable tickets to sold out events. We sell tickets from GA all the way to premium seating and parking. Skip the scalpers in the parking lot and get your tickets online from top New York Islanders ticket brokers. We get you in all events, buy your New York Islanders tickets here from a brand that many trust and rely on for all their ticketing needs.

ScoreBig offers a 100% money-back guarantee. If you have been in search of cheap tickets for New York Islanders, ScoreBig by far is the best option. That’s why ScoreBig has more loyal customers than any other ticketing site. Shop at ScoreBig for safe and secure New York Islanders event tickets.