New York Giants Tickets | New York Giants | ScoreBig.com
ScoreBig is a resale marketplace. Ticket prices may be above face value.
Ashburn, VA, US
All Dates
X
Sorry, there are no events. 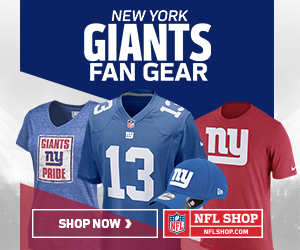 The Giants are looking to come back from a disastrous season and bring a NFC East and Super Bowl title back to New York. With a revamped team on both sides of the ball, led by a high octane offense, the Giants are ready make an impact in the NFC. Division rivals, the Dallas Cowboys and the Philadelphia Eagles are ready to halt the Giants in their tracks.

Grab your NY Giants tickets and head down to MetLife Stadium to be a part of the home field advantage.

The four time Super Bowl champions will be out to claim their throne and you can watch them live by booking your New York Giants tickets.

The New York Giants have been a force to be reckoned with for the most part and as a result have delivered some epic performances over the years.

The First Super Bowl Triumph - The New York Giants had won four NFL titles before they hadn’t even come close to getting their hands on the Super Bowl post the NFL/AFL merger. The Giants decided to do something about it and reached NFL’s showpiece game for the first time in the 1986 season. On January 25, 1987, they took on the Denver Broncos at the iconic Rose Bowl. The Giants ended the jinx to win the game 39-20.

The Move That Changed Everything - The New York Giants signed Lawrence Taylor in the 1981 NFL Draft and that move changed everything for the Giants. Taylor was a force of nature. He stayed with the Giants for thirteen years and during that time won two Super Bowls and became a ten time Pro Bowl pick. Taylor’s influence however went beyond everything he did for the Giants. Many people think it was Taylor’s style of play that eventually led to how offenses prepare and play these days.

The Mother of all Upsets - The New York Giants pulled off one of the most miraculous triumphs by winning Super Bowl XLII. That win is regarded by almost everyone as one of the greatest upsets in sports history.

The Giants had finished second in the NFC East and went 4-4 over their last eight games to finish the season 10-6. That was just about good enough to push them over the line and into the playoffs. They beat the Bucs, the Cowboys and the Packers in the postseason to set up a meeting with the 18-0 Patriots in Super Bowl XLII at the University of Phoenix Stadium. The Patriots were overwhelming favorites but the Giants had other ideas. Eli Manning was the star of the show as he delivered a vintage performance and the Giants won 17-14. It was a stunning upset pulled off by a stunning football team.

The New York Giants have fierce rivalries with the likes of Philadelphia Eagles, Dallas Cowboys and the Washington Redskins.

The Giants-Eagles Rivalry- Without a doubt one of the fiercest rivalries in North American professional sports is the one between the New York Giants and the Philadelphia Eagles. These two sides first met on October 15, 1933, and it has just carried on from there. These two sides have been members of the same division since the year 1933 and then there is a small issue of New York and Philadelphia having a rivalry based on their geographical locations.

Giants-Cowboys Rivalry - The rivalry between the New York Giants and the Dallas Cowboys is a fierce one. They met for the first time on the football pitch on December 4, 1960, in a game that ended in a 31-31 tie. This game set the tone for what has now become one of the most talked about rivalries in the NFL.

Giants-Redskins Rivalry - The New York Giants and the Washington Redskins rivalry kicked off in 1932 when the latter was formed. It is also NFC East Division’s oldest rivalry. The animosity between the two teams reached its height in the 1980s when the Giants and the Redskins began to fight for division championships and of course Super Bowl titles. That resulted in these two famous teams accounting for five Super Bowls and seven division championships between them during that era.

Shared with cross-town rivals the New York Jets, MetLife Stadium is the only NFL venue to be home to two franchises. This 83,000 seat venue is located at the Meadowlands Sports Complex in East Rutherford, New Jersey. The stadium features a very unique experience with it's "Coaches Club," where fans can visit a private, on-field deck just five yards behind the home team's bench.

The MetLife Stadium holds the record of being the most expensive stadium in history. It also has the distinction of hosting the first Super Bowl to be played in the New York metropolitan area. The Seahawks beat the Broncos 43-8 in 2014 to lift Super Bowl XLVII. The stadium also hosted WrestleMania XXIX and also provided the stage for artists like Bon Jovi, Eagles, U2, Bruce Springsteen and Kenny Chesney to perform for their fans.

The New York Giants have won four NFL titles, four Super Bowls, eleven conference championships and sixteen division crowns. They have won all due to the legends that have played for them.

Lawrence Taylor is one of the greatest players to have laced up a pair of football boots. He won two Super Bowl titles, was a ten time Pro Bowl pick and an NFL MVP. The Giants have retired his number 56.

The New York Giants will be out to prove the naysayers wrong this season. They will need the support of their fans in their quest to reach the top of the ladder once again, especially at home at the MetLife Stadium.

The schedule for the season is out and New York Giants tickets are in high demand. Giants fans look as ready as their team and it promises to be a ride that will be nothing short of fascinating.

The last thing you want to find out is when the New York Giants event you wanted to go to is sold-out. Don’t worry in many cases ScoreBig has affordable tickets to sold out events. We sell tickets from GA all the way to premium seating and parking. Skip the scalpers in the parking lot and get your tickets online from top New York Giants ticket brokers. We get you in all events, buy your New York Giants tickets here from a brand that many trust and rely on for all their ticketing needs.

ScoreBig offers a 100% money-back guarantee. If you have been in search of cheap tickets for New York Giants, ScoreBig by far is the best option. That’s why ScoreBig has more loyal customers than any other ticketing site. Shop at ScoreBig for safe and secure New York Giants event tickets.