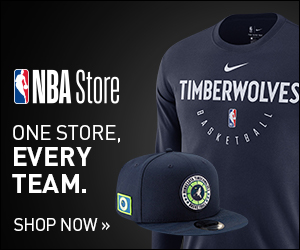 The Timberwolves are locked and loaded and are ready to make some noise in the Western Conference. Led by a highly talented young core, Minnesota is poised to make their mark on the NBA and take control of the Northwest division. Division rivals, the Portland Trail Blazers and the Oklahoma City Thunder will fight to stand in the Wolves way. This young team is capable of putting on a show at any point of the season. Get your Minnesota Timberwolves tickets and head out to the Target Center to help lead your team to victory.

The Most Unforgettable Moments in Minnesota Timberwolves History

The Minnesota Timberwolves fans have had plenty of moments to cheer about over the years and here are two of those.

The Arrival of Kevin Garnett- Leading up to the mid 1990s was not a good time to be a fan of the Minnesota Timberwolves. They were struggling and then it all changed when they decided to take a punt on a young 18 year old Kevin Garnett in 1995. Garnett led the franchise to its most successful time in history, almost all on his own. He left the Wolves in 2007 but not before becoming their all time leader in almost every major category. The Wolves took a big risk when they signed Garnett but he proved that it was a very good decision.

The Epic 2003-2004 Season- The Minnesota Timberwolves clinched their first and only division championship to date that season. Then they entered the playoffs and it turned out to be one unforgettable adventure. They met the Denver Nuggets in the first round and came out on top 4-1 to clinch their first ever postseason series triumph.

Milwaukee Bucks - The rivalry between the Minnesota Timberwolves and the Milwaukee Bucks is because of the geographical location of the two cities. The Bucks are a Wisconsin-based side and so it is natural that there will be a lot of heat between these two sides. The animosity between Wisconsin and Minnesota sides is not only restricted to the NBA though. Just take a look at the Vikings-Packers and Brewers-Twins rivalries.

Cleveland Cavaliers - The rivalry between the Minnesota Timberwolves and the Cleveland Cavaliers is a more recent one. It all kicked off between these two sides when Kevin Love left the Wolves, not on good terms, to make the move to the Cavaliers in 2014. The Wolves received Anthony Bennett and Andrew Wiggins as part of the deal. So, since then whenever these two sides have met, the atmosphere has always been quite heated. To see the two clash get your Timberwolves tickets here.

Target Center is located in the heart of Minneapolis’ vibrant downtown Warehouse and Entertainment District. The arena is surrounded by fantastic restaurants, bars, shopping, hotels, nightlife, theaters, and clubs. Access to and from the arena is made easier by Minnesota's Skyway system. Going out for Timberwolves games makes for a great night out.

The Target Center opened its doors on October 13, 1990 and the Minnesota Timberwolves have been based there since that year. Apart from Wolves games, the arena also played host to the NBA All-Star Game in 1994 and the NBA Draft of 2000. Not only that, but the Target Center was also the venue for the 2011 WNBA Finals.

The arena has also been host to different WWE and UFC events over the years. Music superstars like Garth Brooks, Elton John, Billy Joel and Paul McCartney among others have also stepped on to the stage at the Target Center to perform for their fans.

Kevin Love became the Minnesota Timberwolves’ main man after Garnett and stayed with them till 2014. He won three NBA All-Star picks in Milwaukee and was the NBA Three-Point Shootout champion in 2012.

Lovingly called “Googs”, Tom Gugliotta was a part of the Minnesota Timberwolves from 1995 till 1998. He earned his solitary NBA All-Star selection in Minnesota in 1997. He was a very dependable scorer and the fans loved him.

The Minnesota Timberwolves have put together a pretty good roster for the upcoming season. If they play to their potential, then the team could make it to the playoffs for the second year in a row. Either way, it promises to be a fascinating campaign. Regular tickets and Minnesota Timberwolves season tickets are on sale for fans who want to see their team live in action.