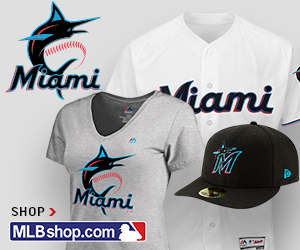 The Miami Marlins’ 2016 MLB season saw the franchise put together a praise worthy performance on the field. However, the Marlins got a big blow with the untimely and tragic demise of their ace pitcher José Fernández on September 25. He was arguably one of the best pitchers in the game at the time and his death left the Marlins struggling at the top of the rotation. The team finished the 2016 campaign in third place in the National League East. However, this is not to suggest that all is lost for the Marlins.

The Marlins improved slightly in the 2017, finishing 2nd in the National League East Division, but unfortunately failed to make the playoffs again. They look to bring another World Series to South Beach moving forward into 2018. Boasting a youthful roster, the Marlins are determined to overtake NL East rivals the Atlanta Braves and the New York Mets in the race for the division crown. Consequently, proving that they are Florida's team over the Tampa Bay Rays.

Get your Miami Marlins tickets and head over to Marlins Park to catch all the action live!

The Marlins are the quickest franchise to bag a World Series title. Let’s have a look at some of the most memorable moments of the franchise.

The 1997 World Series Win - It was the first time the team made it to the postseason and got all the way to the World Series, playing the Cleveland Indians in a very exciting seven-game series.

The walk-off single in the eleventh inning of Game 7 at the Pro Player Stadium in Miami Gardens on October 26 is a memory that Marlin fans will always cherish.

Rookie Craig Counsell rolled up his sleeves as pitcher Charles Nagy of Cleveland Indians geared up for a slider low and away to Edgar Renteria who got just enough of the pitch to hit it past Nagy’s glove and between second baseman Tony Fernandez and shortstop Omar Vizquel, leading his team to its historic first World Series Championship.

The 2003 World Series Win - The Marlins’ second World Series win was against the heavily favored New York Yankees at the Yankee Stadium in Bronx on October 25.

Marlins manager Jack McKeon made the unanticipated decision to start Josh Beckett on three days rest in place of Mark Redman who had struggled in his start in Game 2. The move was indeed an apt one and led the Marlins to clinch their second championship in ten years.

It is the most recent series wherein a losing team outscored the champion team.

Formed in 1991, the Miami Marlins are a relatively new side. Therefore, they do not have historic rivalries as such. Nonetheless, below are a few teams, a loss to whom Marlins’ fans find hard to recover from.

Atlanta Braves - The Miami Marlins and Atlanta Braves have played a number of close games. The rivalry between the two sides however got more intense when the Marlins sent Dan Uggla to Atlanta in exchange for Mike Dunn and Omar Infante.

The rivals have so far clashed a total of 410 times, out of which the Marlins have won 171 while the Braves have won 239 games.

Tampa Bay Rays - The interleague series between the Miami Marlins and Tampa Bay Rays is called The Citrus Series. The Marlins began playing as part of the National League in 1993 while the Rays played their first season in the American League in 1998. The first game between the two sides took place at the Tropicana Field in St Petersburg, Florida, on June 11, 1998.

The two rival teams have squared off a total of 107 times so far. Out of these, the Marlins have clinched 52 while the Rays have 55 wins to their credit. Their overall record is a close one and has the fans excited every time they hit the field.

Numerous players have played for the Marlin franchise over its 24 years of existence. Below are a few worth mentioning.

Miguel Cabrera - In his very first game as a Marlin, Miguel Cabrera hit a walk-off home run. He emerged onto the national scene in the Game 4 of the World Series 2003 when Roger Clemens of New York Rangers was flattening him with fastballs up by his chin. Cabrera stared at him and then responded with a striking two-run homer, leaving the fans cheering in the stands.

Cabrera went on to be named an All-Star in his next four seasons, before he was traded to Detroit. However, he is still the franchise leader in intentional walks (70) and batting average (.313).

Luis Castillo - The contributions of pitcher Luis Castillo for the Marlin franchise cannot be ignored by any regards. Nobody in the history of the franchise has played more games (1,128), scored more runs (675), stolen more bases (281), drawn more walks (533) and totaled more hits (1,273) than the legendary Castillo.

Marlins Park is baseball's newest "contemporary design" stadium. This 37,000 seat arena, located in the heart of Miami, opened in 2012. The stadium includes a Bobble-head Museum, the iconic Home Run Sculpture out in center field, an indoor swimming pool, and aquariums behind home plate.

The schedule for the upcoming match-ups between the Marlins and the rivals is out. It pits the team against opponents such as New York Mets and Arizona Diamondbacks.

So, if you want to catch the excitement live then grab your Marlin Game tickets before they sell out.

The last thing you want to find out is when the Miami Marlins event you wanted to go to is sold-out. Don’t worry in many cases ScoreBig has affordable tickets to sold out events. We sell tickets from GA all the way to premium seating and parking. Skip the scalpers in the parking lot and get your tickets online from top Miami Marlins ticket brokers. We get you in all events, buy your Miami Marlins tickets here from a brand that many trust and rely on for all their ticketing needs.

ScoreBig offers a 100% money-back guarantee. If you have been in search of cheap tickets for Miami Marlins, ScoreBig by far is the best option. That’s why ScoreBig has more loyal customers than any other ticketing site. Shop at ScoreBig for safe and secure Miami Marlins event tickets.