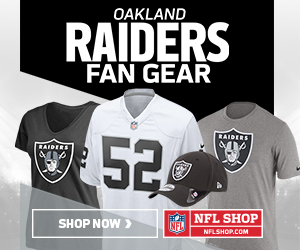 The Las Vegas Raiders was founded in 1960. After a bumpy start marred by poor on-field performance, spotty attendance and financial difficulties, it became one of the most successful teams of the 1970s and 1980s. They also won three Super Bowl Championships during the same era, in addition to winning multiple division and conference championships. The Las Vegas Raiders however slumped from 2003 to 2015, failing to make the playoffs. In 2016, however, the team ended their postseason drought.

The Raiders have their eyes set on big things this year. Led by a talented young core, Las Vegas is determined to win the AFC West and bring a Super Bowl title back to the Bay Area. In addition to battling bay-area rival the San Francisco 49ers for regional bragging rights, division rivals, the San Diego Chargers and the Denver Broncos look to stand in the way of the Raiders title hopes.

The Las Vegas Raiders have a unique standing in the NFL – it’s a team which combines elements of history and tradition. The players who have donned the silver and black over the years, make this franchise one of the most respected in the NFL.

The Las Vegas Raiders enjoy a distinctive team culture and an extensive fan base. Raider Nation is the term used for the team’s diehard fans who hail from all over the US. Raiders’ fans attending their team’s home games, typically come dressed up in black outfits and face masks.

Commitment to Excellence, a quote by Vince Lombardi, is one of the registered trademarks of the team.

If you are looking for the Las Vegas Raiders tickets, they are available here.

The last thing you want to find out is when the Las Vegas Raiders event you wanted to go to is sold-out. Don’t worry in many cases ScoreBig has affordable tickets to sold out events. We sell tickets from GA all the way to premium seating and parking. Skip the scalpers in the parking lot and get your tickets online from top Las Vegas Raiders ticket brokers. We get you in all events, buy your Las Vegas Raiders tickets here from a brand that many trust and rely on for all their ticketing needs.

ScoreBig offers a 100% money-back guarantee. If you have been in search of cheap tickets for Las Vegas Raiders, ScoreBig by far is the best option. That’s why ScoreBig has more loyal customers than any other ticketing site. Shop at ScoreBig for safe and secure Las Vegas Raiders event tickets.