Lacrosse Tickets | Lacrosse 2020 | ScoreBig.com
ScoreBig is a resale marketplace. Ticket prices may be above face value.
Ashburn, VA, US
All Dates
X 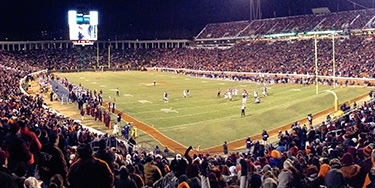 It can be said with certainty that Lacrosse is one true North American sport. A part of Iroquois (comprising of Mohawk, Tuscarora, Seneca, Cayuga, Oneida, and Onondaga) culture, the sport was played to train young men for war. Today Lacrosse, may be different from its earlier version, but it remains the fastest game to be played on two feet. It is also one of the fastest growing sports in the US. If you are looking for Lacrosse game tickets, they are available here. Get yours now and cheer for your team in person.

Developed as early as 1100 AD, how the sport was played back then remains shrouded in mystery. “Indian Lacrosse” was a communal game in which the whole tribe participated. It wasn’t unheard of 100 to 1000 people playing Lacrosse at the same time.

In addition to toughening up young men for war, the sport also had a spiritual aspect to it. It was referred to as “The Creator’s Game.” Those who participated did so in the role of warriors with the ultimate goal of bringing honor and glory to their tribes by winning.

Lacrosse and the Europeans

The word “Lacrosse” is present day manifestation of la crosse, which means “the stick” in French. In 1637, a French Jesuit missionary Saint Jean de Brébeuf saw an Indian tribe play the sport and thought of it as a form of field hockey, which in French is le jeu de la crosse.

In the 1800s, the French started to play Lacrosse with the intention of refining its rules. They and the Natives are credited with laying down foundations of present day Lacrosse. The rules of the game had however been laid down earlier during a game between the Mohawks and Seneca in 1794.

A team sport, Lacrosse is played with a stick and a ball. The head of the stick is used to pass, catch, carry and shoot the ball into the goal. Unlike other sports, Lacrosse rules differ depending upon its version.

The sport has four versions:

Field Lacrosse – Field Lacrosse is a contact sport played outdoor by men. Due to the nature of the sport, players wear protective gear, which includes helmet, elbow and shoulder pads and gloves.

Women’s Lacrosse – This version of the sport doesn’t allow body contact, but only stick to stick contact. Therefore players only wear eye gear, while goalies wear protective pads and helmet.

Box Lacrosse – Box Lacrosse is similar to Field Lacrosse, except that it is played inside.

Intercrosse – As the name suggests, it is a mixed-gender version of the sport. It is also a non-contact version where players use plastic sticks and a softer ball.

Lacrosse is played at college level where men’s and women’s teams compete at both the NCAA and club levels. The sport is also played at semi-professional level, where The Major League Lacrosse (MLL), The National Lacrosse League (NLL) and The United Women’s Lacrosse League (UWLX) are the major governing bodies.

One of the oldest (if not the oldest) games in North America, it is hard to list all the greats that have played this sport. Here are a few,

Matt Poskay – Poskay plays for the Boston Cannons of Major League Lacrosse. He set records while in high school and did the same as an undergraduate at the University of Virginia. While at UVA, he was recognized twice as an All-American and was inducted into the New Jersey Lacrosse Hall of Fame at the age of 29.

Jim Brown – Yes, the same Jim Brown who played football with the Cleveland Browns. One of the greatest football players of all time, Brown also excelled in Lacrosse, track and field and basketball.

Paul Rabil – Rabil plays for the New York Lizards of Major League Lacrosse. He has been named the MLL Offensive Player of the Year three times.

Dave Pietramala – Considered one of the greatest defensemen in the sport’s history, Pietramala is presently the head coach for the Johns Hopkins University Men’s Lacrosse team.

Since it can be played both in and outdoors, Lacrosse is one of very few sports that can be enjoyed year-round. If you’re a fan of this sport and looking for cheap Lacrosse tickets to catch your favorite players live in action, then you’ve come to the right place. Lacrosse tickets are now available here. So, get yours now and get a good deal early in the season.