Hockey Tickets | Hockey 2020 | ScoreBig.com
ScoreBig is a resale marketplace. Ticket prices may be above face value.
Ashburn, VA, US
All Dates
X 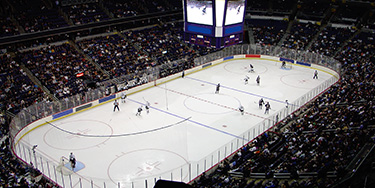 UConn Huskies
56 Events
Hockey
"The Great One" is no longer competing on the ice, but hundreds of hockey players are out there fighting to be the next legend! Hockey games are full of fun, fights, food and die-hard fans waiting to hear the sound of the puck hit the ice. Hockey tickets to see the all the NHL teams are available soon after the long post season finishes. Get NHL tickets for all of your favorite teams all season long to see who has a chance to win the Stanley Cup trophy! Hockey schedules come out before the ice is even frozen in the most northern parts of the country, just so fans can get pumped for their favorite sport! There are plenty of NHL regular season tickets and NHL playoffs tickets available every year, so get to your nearest rink and get your hockey tickets today! See the Chicago Blackhawks, Boston Bruins, New York Rangers and Los Angeles Kings literally fight their way to victory, you do not want to miss one game!

With the temperatures dropping outside, it means only one thing – the ice hockey season is here! The 2017-18 preseason is ready to kickoff and National Hockey League (NHL) has revealed its exciting schedule. It all starts with the 2017 Stanley Cup champs, the Pittsburgh Penguins raising their championship banner before a four-game series against the St. Louis Blues. As the action unfolds, everyone’s favorite, the Toronto Maple Leafs will hit the road to take on the Winnipeg Jets at the Bell MTS Place.

Anticipation will build as the season moves to the thrilling Battle of Alberta that will pit the arch rivals Edmonton Oilers and the Calgary Flames against each other. SAP Center will also come alive with the loud cheers of the San Jose Sharks fans as they welcome the Philadelphia Flyers to their home field. This season’s highlights also include the Detroit Red Wings starting a new era of hockey in their new home, the Little Caesar’s Arena.

Also on the schedule is 2017 Scotiabank NHL100 Classic, an outdoor tribute game between the Montreal Canadiens and Ottawa Senators. A historic game, it’s the celebration of the 100th anniversary of the NHL’s first game played on December 19, 1917. To say that the tickets for these games as well as the 2018 NHL All-Star weekend are in great demand will be an understatement. The sales are simply soaring.

Hockey and Its Origin

Like many other sports, hockey too has evolved over the centuries. Definitely a product of Canada, hockey is as Canadian as the Maple Leaf! An exciting and fastest paced winter game in the world, ice hockey got its start from the East Coast, specifically from Nova Scotia. For almost 75 years, the region enjoyed the thrill of the sport before its popularity spread to the West Coast.

Going even deeper in its roots, ice hockey didn’t start out as a new invention. In fact, around the year 1800, athletes at the Canada’s King’s College School adapted an old sport Hurling to the ice. Known as the “Ball-and-Stick” game, Hurling required the use of a wooden stick called Hurley and the players moved the ball called sliotar between each other’s goalposts. Ice ponds were converted into playing fields and the Canadians got themselves another winter game to enjoy. With time, Ice Hurley developed into Ice Hockey.

The sport got its first mention by the acclaimed author Thomas Chandler Haliburton, who hailed from Windsor, Nova Scotia. He wrote about “hurley on the ice” while penning about the history of Nova Scotia and it later made way to literature books.

Ice Hockey Over the Years

Ice hockey made its debut in the United States around 1893. Among the many achievements that the sport has, what stands out is the Stanley Cup. Did you know that it’s the oldest trophy in North America? And not only that, there was a time when it became such an honor to win the Stanley Cup that the Governor General of Canada was requested to present the trophy to the winners.

Ice hockey didn’t alter its rules that were set initially, except reducing the players from nine to six. Also, with time new and improved equipment was introduced to minimize injuries.

Hockey is a game of intense pressure but unlike other sports where the teams try not to be pulled into the hype and buzz, hockey players consider pressure a privilege. It means they have a chance. Here’s a rundown on some of the epic moments in ice hockey history recorded by the best teams in the NHL.

Edmonton Oilers (1984-85) – Their sixth season in the NHL, the Edmonton Oilers clinched their consecutive Stanley Cup, following the stunning 1983–84 with another nail-biter in 1984–85. Defeating the Philadelphia Flyers 4-1, Wayne Gretzky became the top scorer of that season and was also named the MVP. The Oilers went on to win three more straight Stanley Cups, extending their championship haul to five.

Pittsburgh Penguins (1991-92) – Amidst a lot of internal turmoil including injuries, contract squabbles and the tragic death of coach Bob Johnson due to cancer, the 1991-92 Penguins reached the pinnacle. With an 11-game, record tying playoff winning streak, team Pittsburgh lifted their second consecutive Stanley Cup. Their incredible success was attributed to the lineup depth, world-class talent and fierce desire.

Montreal Canadiens (1976-77) – The Boston Bruins-Montreal Canadiens rivalry has always been a fierce one. Their Stanley Cup count is almost head to head, with the Bruins winning the title 25 times and the Canadiens taking their trophy haul to 24. In what’s considered to be an extraordinary season (1976-77), the Canadiens were on a losing streak against the Bruins. And the former took it hard. Guy Lafleur of team Montreal publically stated, “I will never accept losing. Never! The law of averages is bound to catch up with us, but that’s no excuse for a bad performance”.

And that’s what was considered a defining moment for the team. Challenging themselves to be the best, they shocked the hockey world by crushing the Bruins 4-0. The 1976-77 Montreal Canadiens roster set the standard by which all the other great NHL teams will continue to be measured.

Detroit Red Wings (1997-98) – Their second back to back Stanley Cup win, the Detroit Wings crushed the Washington Capitals 4-0 in the 1998 finals. Steve Yzerman was named the MVP that year. The dedication and passion to win the championship that season came from the serious injuries that the key player Vladimir Konstantinov sustained during a limousine accident. Since he was unable to play in the remaining season, the Wings wore his initials badge on their jerseys and after winning the title, wheeled him on the ice, placing the cup on his lap.

New York Islanders (1982-83) – By clinching their 4th straight Stanley Cup title, the New York Islanders created a remarkable dynasty. According to the defenseman Denis Potvin, who was later inducted into the Hall of Fame, “The team was a machine at that point. We were so grooved and so emotionally sharp. It was just such a joy to play; everything was automatic”.

There are so many other historic moments in the world of ice hockey, all that can’t be put down in one piece. If you’re a diehard fan of the sport then you probably have checked the latest schedule and are currently looking for cheap hockey tickets. Keep checking our space for the latest updates on ice hockey events, along with the new tickets that we continue to add to our collection.