Football Tickets | Football 2020 | ScoreBig.com
ScoreBig is a resale marketplace. Ticket prices may be above face value.
Ashburn, VA, US
All Dates
X 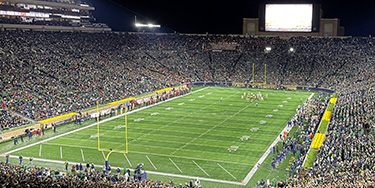 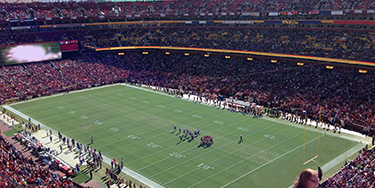 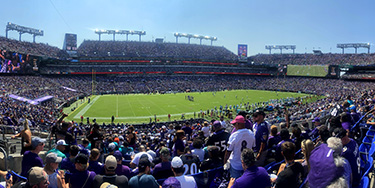 Evolution of the Sport

Snap didn’t make the sport anymore interesting as teams were holding on to the ball indefinitely. As a result, the sides were gaining no ground and there were plenty of 0-0 ties. Called the “block game,” snap was hated by the majority.

Introduction of the scrum was reconsidered, but instead a “three downs” rule was adopted in 1882, wherein each team was allowed three downs to move the ball five yards. In case of failure, the other team was given the ball. Rules for field size, scoring system and blocking were also enacted around this time.

However, even with an increased regulatory system, football remained a violent sport, where serious injuries were a common place and death, not unheard of. In 1905 alone, 19 players died due to football related injuries, resulting in President Theodore Roosevelt threatening to abolish the sport altogether unless it was changed and made safer. This is when the National Collegiate Athletic Association (NCAA) was established.

The NCAA along with the National Football League (NFL) are two of the biggest football leagues in the US today. The NFL was founded in 1920 and it has popularized the sport to the extent where NFL games have the highest average attendance of any sporting league in the world. The league is divided into two conferences – the National Football Conference (NFC) and the American Football Conference (AFC). Each conference is further divided into four divisions – East, West, North and South. Each division has four teams, which means each conference has 16 teams, resulting in a total of 32 NFL teams.

The biggest prize in the game of professional football is the Vince Lombardi Trophy. Named after the legendry coach Vince Lombardi, this trophy is awarded to the team which wins the Super Bowl. The New England Patriots are the reigning NFL Champions.

One of the biggest reasons why football has become so popular in a relatively short period of time is that fans and spectators do not have to wait for the Super Bowl to catch some exciting games during the season.

Here is a list of some of the greatest games ever played:

Colts vs. Giants – There are three reasons why this game is the greatest – one, because Johnny Unitas was playing, second, because it was the first NFL game to be televised nationally and third, the first overtime in NFL championship history happened in this game.

The game was played between the Baltimore Colts and the New York Giants on December 28, 1958. Unitas was the starting quarterback for the Colts and his side was leading 14-3 at the half. However, in the second half, the Giants mounted a comeback and were leading with only a few minutes left to play when Unitas got the ball. The Colts tied the game with a few seconds left on the clock. In overtime, the Giants defense ran out of gas, resulting in a 23-17 Colts win.

Chargers vs. Dolphins – On January 2, 1982, Kellen Winslow was treated for severe cramps, dehydration, pinched nerve in the shoulder and a gash in the lower lip that required three stitches – you don’t become the MVP of a game for nothing after all.

Played between the San Diego Chargers and the Miami Dolphins, the game saw the Chargers lead by 21-0. This is when Don Shula, the Dolphins head coach benched his starting quarterback and gave the ball to Don Strock. The Dolphins leveled the score and the game went into overtime. The Chargers finally won 41-38.

Cowboys vs. Packers – It was like as if the game was played on hard Arctic ice instead of Lambeau Field. Played on December 31, 1967, between the Dallas Cowboys and the Green Bay Packers, this game is famously known as “The Ice Bowl.”

It would not be an exaggeration to say that it was more Vince Lombardi vs. Tom Landry rather than the Dallas Cowboys vs. the Green Bay Packers. Lombardi was in a hurry to finish the game and take his boys back into the warm locker room. So, he told Bart Starr to finish the game rather than taking it into overtime. And Starr did just that. Bart Starr’s final drive was iconic as he took the ball into the end zone himself and won the game.

The following are some of the most recognized football rivalries of all time:

Steelers – Ravens Rivalry – Baltimore and Pittsburgh are two huge football crazy cities and their rivalry has been one of the most intense in the league. They first met in 1996 and the animosity has just carried on from there. In addition to the players, the fans hate each other too. Unlike many other rivalries, there has been no “time out” in this rivalry – it has been hot since 1996. It is always a delight to watch these two collide as if every regular season game is a playoff game.

Cowboys – Redskins Rivalry – One of the top NFL rivalries, the Dallas Cowboys and the Washington Redskins have hated each other since 1960. In addition to producing some iconic games, this rivalry is known for harmless pranks as well.

In 1961, some Cowboys fans snuck into the Redskins stadium. The idea was to scatter chicken feed on the field and during the halftime show, chickens would be released onto the field. And it almost happened too. Dick McCann, who was a Redskins rep at the time saw the crates only minutes before the halftime show and stopped the prank.

Eagles – Giants Rivalry – This is essentially a rivalry of two cities. Philadelphia and New York are fierce rivals in baseball and hockey as well. Their NFL rivalry started in 1933 and grew in the 1950s. A decade later, the rivalry delivered a hostile encounter when Eagles’ Chuck Bednarik plowed Giants’ Frank Gifford with one of the worst tackles you are likely to see. While celebrations erupted in Philadelphia, fans in New York weren’t celebrating and Gifford went into a brief retirement.

Packers – Bears Rivalry – This is like the Cowboys – Redskins rivalry, only older. Apart from some hard hitting games, the encounters between these two sides are also punctuated by pranks like the Packers leaving horse manure in the Bears’ locker room in 1985. However, what makes this rivalry extra special is that football rules have been changed because of games between these football titans.

Raiders – Steelers Rivalry – This rivalry saw its heyday in the ‘70’s. Both teams were the best in the league during the decade and their best often came out in the form of brutal play on the field. This rivalry led to an off-field contest too where Raiders’ George Atkinson filed a slander lawsuit against the Steelers’ head coach Chuck Noll. The Steelers have also accused the Raiders of deflating football, a claim which had no takers in league and was thrown out by the NFL.

Whether you are a Dallas Cowboys fan, a New England Patriots fan or just a football fan, there is always something to look forward to every season. There is a reason football is one of the most watched sports in America. Between all the interceptions, hail mary passes, long field goal attempts and more, football is something you cannot keep your eyes off of. Everyone will be talking about the big game when it comes around, but real football fans will be anxiously waiting for the football schedule to see who is playing who this year. The NFL has the best football teams in the world and the biggest and loudest fan base to support them thanks to so many NFL tickets available each season. When the NFL playoffs begin, everyone becomes a football fan and looks to get their hands on football tickets. The Pittsburgh Steelers, New York Giants, Green Bay Packers are always working hard to become the next world champions and to get a full taste of victory. To see them lift the Vince Lombardi Trophy, get your cheap football tickets here.