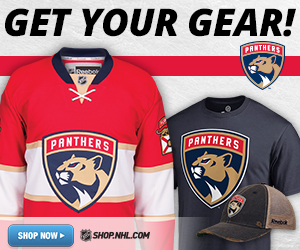 The Panthers are locked and loaded and have their sights set high for this upcoming season. Led by a highly talented young core, Florida is ready to capture the Atlantic division and bring home a Stanley Cup. They will look to edge out rivals the Tampa Bay Lightning and the Philadelphia Flyers for their shot at championship glory.

Get your Florida Panthers tickets and head over to the BB&T Center to be a part of your team's championship hunt.

The Rat Trick – More of a gimmick than a memorable moment, this comedic folk lore came into existence on October 8, 1995. After killing a rat in the locker room before the Panthers’ home opener against Calgary, right wing Scott Mellanby scored two goals. When asked about Mellanby’s performance, goalie John Vanbiesbrouck joked saying Mellanby had a rat trick which involved him killing rats before the game and then scoring. Almost immediately Panthers fans started throwing plastic rats on the ice every time the Panthers scored a goal. The tradition went on for a season before it was outlawed by the NHL.

The greatest list for the Florida Panthers starts with Pavel Bure. This Russian born Right Wing spent only two seasons with the Panthers, in which he scored 60 goals each in back to back campaigns. Bure’s game had all the elements prominent in the Soviet Union. He had the speed, skill and the ability to possess the puck. During his two seasons with the Panthers and throughout his sixteen year career, he was called the Russian Rocket.

John Vanbiesbrouck is another Panther who played a critical role in the franchise’s success. Known as the Breezer or VBK, the Detroit born goaltender played for the Panthers from 1993 till 1998. In addition to setting numerous franchise records, Vanbiesbrouck played an instrumental role in the Panther’s trip to the Stanley Cup Finals in 1996.

A few other players who deserve a mention in this category are Roberto Luongo, Scott Mellanby, Stephen Weiss and Robert Svehla.

The Florida Panthers Live at the BB&T Center

The BB&T Center overlooks the glorious Everglades where the endangered Florida Panther still roams. Its ideal location adjacent to Fort Lauderdale and just north of Miami allows fans of all ages to take in some great pre-game activities. The arena also provides fans with a unique nightclub experience with Club Red.

It will be interesting to see how the changes in the Panthers front office and line up reflect on the ice rink. There is a possibility that the Panthers make it all the way to the playoffs this season.

Be there when it happens with Florida Panthers Playoff Tickets available here.

The last thing you want to find out is when the Florida Panthers event you wanted to go to is sold-out. Don’t worry in many cases ScoreBig has affordable tickets to sold out events. We sell tickets from GA all the way to premium seating and parking. Skip the scalpers in the parking lot and get your tickets online from top Florida Panthers ticket brokers. We get you in all events, buy your Florida Panthers tickets here from a brand that many trust and rely on for all their ticketing needs.

ScoreBig offers a 100% money-back guarantee. If you have been in search of cheap tickets for Florida Panthers, ScoreBig by far is the best option. That’s why ScoreBig has more loyal customers than any other ticketing site. Shop at ScoreBig for safe and secure Florida Panthers event tickets.