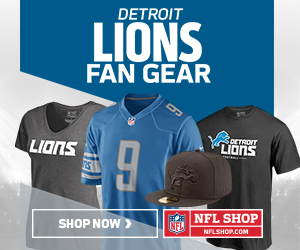 The Lions are back and have their sights set on bringing a championship home. With a high powered offense and an up and coming defense, Detroit is ready to regain the NFC North division championship. Division rivals, the Green Bay Packers and the Chicago Bears will look to stand in the Lions way.

Grab your Detroit Lions tickets and head over to Ford Field to be a part of your favorite team's quest for a championship.

The Lions did not qualify for the playoffs for the 2017 season. They finished the regular season 9-7, finishing seventh in the NFC. But they have high hopes for upcoming seasons with players such as LB Jarrad Davis and QB Brad Kaaya.

With the latest NFL season approaching, Detroit has all the ingredients for an impeccable season.

Thanksgiving Game, 1962 – Detroit’s immediate rivals, the Green Bay Packers were undefeated heading into the 1962 Thanksgiving Game. That is, until they met the Lions. Detroit won the game 26 to 14, leaving the football world pleasantly surprised by these underdogs.

Sanders out runs Smith – As one of the most loved players by Detroit fans, Barry Sanders is arguably the champion of the people. Sanders particularly entered the limelight after beating Emmitt Smith’s on-team record of 143 yards. Sanders ran a staggering 194 yards during a 1994 game in Dallas, impressing spectators and team mates alike.

2013: Reggie Bush embarrasses the Chicago Bears – Bush became the key ingredient to Detroit’s defense during the 2013 NFL season. In a week 4 face-off with the Bears, Bush made a memorable run past multiple defenders from Chicago all the way to the end zone. This effort just before the second half was crucial for Detroit to win the game 30-10.

At present, the most popular player has got to be the Honolulu-hailing Ndamukong Suh, who is a favorite amongst fans. Detroit has championed talented athletes over the years such as Cory Shlesinger and Doak Walker.

Schlesinger, also nicknamed Anvil Head is considered one of the greatest of the Lions to have stepped onto the field. Walker, on the other hand, stands out literally because there is a collegiate award named after him. He was an instant success, being named NFL’s Rookie of the Year in 1950. Sure enough, his Hall of Fame induction came in 1986.

Ford Field presents Lions fans with a first class viewing experience. The Stadium incorporates the old Hudson’s warehouse (established in the 1920’s) as part of the industry-leading sports and entertainment development that will include banquet facilities, restaurants, office space, retail services, food courts, lounge areas and all private suites. Ford Field claims the best sight lines of any football stadium in the United States, made available by omitting the traditional club and suite levels and thereby lowering the upper level.

Detroit Lions tickets-and their season schedule are both out, so get your tickets before they run out.

The last thing you want to find out is when the Detroit Lions event you wanted to go to is sold-out. Don’t worry in many cases ScoreBig has affordable tickets to sold out events. We sell tickets from GA all the way to premium seating and parking. Skip the scalpers in the parking lot and get your tickets online from top Detroit Lions ticket brokers. We get you in all events, buy your Detroit Lions tickets here from a brand that many trust and rely on for all their ticketing needs.

ScoreBig offers a 100% money-back guarantee. If you have been in search of cheap tickets for Detroit Lions, ScoreBig by far is the best option. That’s why ScoreBig has more loyal customers than any other ticketing site. Shop at ScoreBig for safe and secure Detroit Lions event tickets.