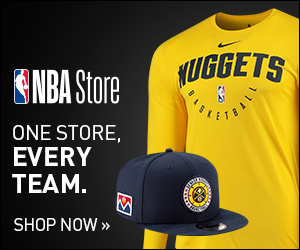 The Denver Nuggets were founded in 1967 and have gone on to make several playoff appearances since. They have however struggled a bit from the 2013-2014 season onwards. In the 2017-18 campaign, they finished fifth in the Northwest Division and ninth in the Western Conference. However, with star players on the roster, such as Nikola Jokic, Gary Harris and Wilson Chandler the Nuggets are looking to a fresh start during the upcoming NBA season.

The Nuggets are back and have their sights set on making some noise in a highly competitive Western Conference. Led by a talented and youthful roster, Denver will look to get back into playoff contention and make some noise in an competitive Western Conference. Division rivals, the Portland Trail Blazers and the Minnesota Timberwolves are going to fight to halt the Nuggets' aspirations. Get your Denver Nuggets tickets and head down to the Pepsi Center to be a part of your team's home court advantage.

The Denver Nuggets have given plenty of unforgettable moments to their fans over their forty four years of existence. Here, we take a look at some of them.

Mahmoud Abdul-Rauf’s Performance Against the Chicago Bulls – The Chicago Bulls played one of their best seasons in 1996. That year, the team lost only ten times. One of those losses was handed to them by the Denver Nuggets at the McNichols Arena on February 4, 1996. That day, Mahmoud Abdul-Rauf delivered one of his greatest performances. He scored 32 points which helped the Nuggets break the Bulls’ eighteen-game winning streak.

Rodney Rogers Scores 9 Points in 9 Seconds – On February 8, 1994, at the McNichols Arena, the Denver Nuggets collided with the Utah Jazz. The former was trailing, 94-86 with around 30 seconds left in the game. It seemed like the Jazz were about to win but then something miraculous happened. The Nuggets’ player, Rodney Rogers hit three three-pointers to give his team a one point lead. Unfortunately in the end, the Nuggets lost, but Rogers’ phenomenal performance will always be remembered by the fans.

Denver Nuggets have fierce rivalries with the New York Knicks and the Golden State Warriors.

Nuggets-Knicks Rivalry – The Nuggets share an intense rivalry with the New York Knicks. On December 16, 2006 at the Madison Square Garden, this rivalry reached its peak when both teams had an all-out brawl after Knicks’ Mardy Collins made a flagrant foul. Since then, things have not been the same between the two.

Nuggets-Warriors Rivalry – The rivalry between the Denver Nuggets and the Golden State Warriors began in the 2012-13 season. That year, the Warriors eliminated the Nuggets from the playoffs by defeating them in the First Round, 4-2. Throughout that series, there was plenty of drama which kicked off this rivalry. One example of that being, Stephen Curry’s minor altercation with a Nuggets’ fan who tried to haggle him. Then, there were some rumors that Andre Iguodala visited church with the Warriors players and went as far as to reveal the Nuggets’ game plan against them. All this was enough for the rivalry to begin between these two sides.

Owned by Kroenke Sports & Entertainment, Pepsi Center is the home of the Denver Nuggets. The venue opened to the public on October 1, 1999. Over the years, Pepsi Center has hosted numerous events including the 2008 Democratic National Convention. In addition, many popular names from the music industry like Garth Brooks and Jay-Z have also performed live at the venue.

In the mile high city, the Pepsi Center hosts one of the loudest fan bases in the league. Every game, you know the arena will be rocking. Within four or five blocks of the arena are numerous restaurants, bars, and shopping, which make for a great night out before and after Nuggets games.

Greatest Players in the History of Denver Nuggets

Alex English is one of the greatest players to have played for the Denver Nuggets. He was part of the team from 1980 to 1990. During this decade, he appeared in the NBA All-Star Game a total of eight times. English also received the J. Walter Kennedy Citizenship Award in 1988. Moreover, in his honor, the Nuggets retired his number 2.

There are also other stars like Spencer Haywood, Allen Iverson, Dan Issel and Dikembe Mutombo who played for the team. All of them are now inducted into the Denver Nuggets’ Hall of Fame.

Since 2012-13 season, the Denver Nuggets have not qualified for the playoffs. However, their fans still have faith in their team. With the current roster, who knows what the Nuggets might achieve this season? Will they be able to win the top prize this time? You can find out by getting your hands on Denver Nuggets tickets.

The last thing you want to find out is when the Denver Nuggets event you wanted to go to is sold-out. Don’t worry in many cases ScoreBig has affordable tickets to sold out events. We sell tickets from GA all the way to premium seating and parking. Skip the scalpers in the parking lot and get your tickets online from top Denver Nuggets ticket brokers. We get you in all events, buy your Denver Nuggets tickets here from a brand that many trust and rely on for all their ticketing needs.

ScoreBig offers a 100% money-back guarantee. If you have been in search of cheap tickets for Denver Nuggets, ScoreBig by far is the best option. That’s why ScoreBig has more loyal customers than any other ticketing site. Shop at ScoreBig for safe and secure Denver Nuggets event tickets.