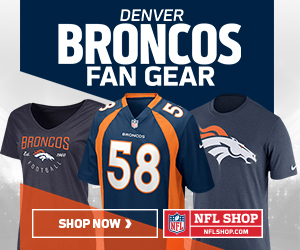 Even though the Broncos have delivered strong performances in recent years, winning Super Bowl 50 in 2015, the 2016 season was a bit of a disappointment. The Broncos missed the playoffs for the first time since 2010 and became the 12th team to fail to defend their Super Bowl championship title. The Broncos failed to make the playoffs in the 2017 season as well.

With head coach Vance Joseph, the team will try to improve on its record from last year. With impressive performances in the preseason, the Broncos are ready to get over the hump and bring a Super Bowl title back to the Mile High City. Led by determined veterans and hungry young talent on both sides of the ball, Denver is ready to take on the AFC. Division rivals, the San Diego Chargers and the Kansas City Chiefs, will look to spoil the Broncos plans.

Grab your Denver Broncos tickets and head down to Sports Authority Field to be a part of the championship run.

The Super Bowl 50 - Super Bowl 50 was one of the finest moments in the history of the Denver Broncos. They came into the game as underdogs with most people thinking that the game would be an easy win for the Panthers. Denver had struggled to score throughout the season and some believed that their defense would not be able to block the high-powered Panthers offense, led by Cam Newton. But thanks to Van Miller exploding around the line, the Broncos managed to get a 10-point lead – and on February 7, 2016, at the Levi's Stadium in front of 71,088 fans, the Broncos lifted the Vince Lombardi Trophy.

“The Drive” – One of the Greatest Comebacks - Considered to be one of the greatest moments in the history of the sport, The Drive happened against the Cleveland Brownson January 11, 1987. It was a cold winter day at the old Cleveland Municipal Stadium and the field was littered with trash and dog bones. The ball rested on the two-yard line, 98 yards away from the end zone. Five minutes and two seconds later, over a course of 15 plays, under the offensive attack of John Elway, the Broncos managed to tie the game at 20 with only 37 seconds remaining on the clock. The Broncos eventually went on to win the game 23-20 in OT. The Drive will always be considered as one of the greatest comebacks in the history of the NFL.

The Broncos have much-talked about rivalries with the Kansas City Chiefs and the Oakland Raiders.

Kansas City Chiefs – The I-70 Bowl - Since the two teams are from the same division, the Broncos and the Chiefs have the complete recipe for a perfect rivalry. In all-time series, the Chiefs lead 59-55 and in the postseason, the Broncos lead 1-0. The Chiefs had the upper hand in the rivalry in the 1960s, winning 19 out of their 20 games against each other. Since then, the Broncos have fought back, winning the series in each ensuing decade and managing to achieve a 9-5 edge over the Chiefs in the 2010s so far. The Kansas City Chiefs won all the games in the first three years of the rivalry. The rivalry is sometimes referred to as The I-70 Bowl since the two teams are connected through I-70.

The Oakland Raiders - The two teams have met a total of 115 times, including the playoffs, with the Raiders leading 62-51-2. The postseason results are tied 1-1. The rivalry initially developed in the 1977 season, when the Broncos ended a 17-game winning streak of the Raiders in a game where Ken Stabler, the Raiders’ quarterback threw seven interceptions. The Broncos went on to defeat the Raiders, 20-17, to clinch their first AFC championship.

Greatest Players of the Denver Broncos

The Denver Broncos have had several legends on their roster over the years. Peyton Manning is one such legend. He has a regular season record of 38-10 which includes a famous 2013 run when Manning lit up the League for an impressive 5,477 yards and 55 touchdowns. Another big name in the team is Champ Bailey, who is considered one of the greatest cornerbacks of all time. In 2006, this star player led the NFL with 10 interceptions and has managed to rack up 522 tackles, 3 return touchdowns and 34 interceptions in his decade of service to the Broncos.

John Elway, the Golden Boy is widely known for his exceptional talent. He began playing for the Broncos in 1983. The Drive is one of the best moments of his earlier career days.

The Broncos, Mile High and the Upcoming Season!

The Denver Broncos will play their home games at the Sports Authority Field at Mile High.

Due to its location and altitude of one mile above sea level, Sports Authority Field at Mile High gives the Broncos an advantage most teams struggle with. To go along with the Denver Broncos Ring of Fame, Sports Authority presents fans with stunning views of the picturesque Rocky Mountains and downtown Denver's Skyline. The experience at Mile High is unlike any other and you can be a part of it by getting these Denver Broncos tickets.

The upcoming NFL season promises to be even more entertaining than last year. Don’t miss out!

The last thing you want to find out is when the Denver Broncos event you wanted to go to is sold-out. Don’t worry in many cases ScoreBig has affordable tickets to sold out events. We sell tickets from GA all the way to premium seating and parking. Skip the scalpers in the parking lot and get your tickets online from top Denver Broncos ticket brokers. We get you in all events, buy your Denver Broncos tickets here from a brand that many trust and rely on for all their ticketing needs.

ScoreBig offers a 100% money-back guarantee. If you have been in search of cheap tickets for Denver Broncos, ScoreBig by far is the best option. That’s why ScoreBig has more loyal customers than any other ticketing site. Shop at ScoreBig for safe and secure Denver Broncos event tickets.