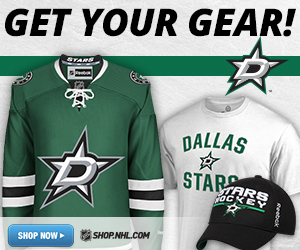 The Dallas Stars are locked and loaded and have their sights set high for this upcoming season. Led by high powered offense, Dallas looks poised to regain the throne on top of the Central Division and bring home a Stanley Cup trophy. Division rivals, Chicago Blackhawks and the Colorado Avalanche will fight to keep the Stars down.

Grab your Dallas Stars tickets and head down to the American Airlines Center to help lead your team to an NHL championship.

Last season did not really go according to the script for the Dallas Stars as they failed to make it to the postseason in 2018. They clinched their most recent division title in 2015 so they are more than capable of making significant moves this season.

If you want to see them in action live, then this is your opportunity to book Dallas Stars single game tickets or tickets for the series live.

March 13, 2007 was the date when he scored his 500th goal in the NHL which made him only the second American born player to record the feat. Then four days later on March 17, Modano scored goals numbers 502 and 503 to become the American born hockey player with the most NHL goals in history. He wasn’t done there. On November 8 of the same year, he became the highest point scorer among all American born players in NHL history.

The Stanley Cup Triumph - In only their sixth season as an NHL franchise, the Dallas Stars found themselves facing the Buffalo Sabres in the Stanley Cup Finals. The Stars began Game 6 on June 19, 1999, at the Marine Midland Arena, 3-2 up in the series and one win away from the title. It was a pulsating clash that went into triple overtime, tied at 1-1. At 14:51 of the third overtime, Brett Hull scored the winning goal to seal the Dallas Stars their first ever Stanley Cup triumph.

The Dallas Stars do not have any major rivals as such but there are a few teams they don’t get along with.

Minnesota WildThe Dallas Stars and the Minnesota Wild are both members of the Western Conference Central Division but the dislike goes a few years back. The Dallas Stars were formed in 1967 as the Minnesota North Stars. They moved to Dallas in 1993 and left Minnesota without a hockey team. This did not go down well with a lot of people in the city and now that these two sides are in the same division, fireworks are expected when they face each other.

St Louis BluesThere is bound to be some extra spice to the proceedings when the Dallas Stars meet the St. Louis Blues. The reason behind the tension is Ken Hitchcock’s move to Dallas from St. Louis to become the former’s head coach. This is Ken’s second stint with the Stars, with the first one culminating in them winning their first and only Stanley Cup to date. Now that he has quit the Blues to coach the Stars, there is bound to be some tension when these two teams face off. If he manages to take the Stars to the top, then the animosity between the two teams will only increase.

Opened in 2001, the American Airlines Center is one of the best sporting venues in the NHL. In the arena, fans are welcomed by a beautiful combination of brick, granite and limestone that creates the warm feeling of home. The arena also includes three state of the art video boards and sound systems that present the public with a five star game day experience. If you want to enjoy a fan friendly spot before or after the game, you must visit AT&T plaza.

The American Airlines Arena has been the go-to arena for multiple sporting events over the years. It has hosted the Big 12 Basketball Tournament thrice and the NBA Finals in 2006 and 2011. Not only that but the famous venue has also played host to the NHL All-Star Game, to different UFC events and WWE pay-per-view shows like the Great Balls of Fire which was held there on July 9, 2017.

The Greatest Dallas Stars in History

At the top of the list of the greatest Dallas Stars players in history is the name Mike Modano. The former Stars Captain has had his number 9 retired by the Dallas Stars. He won the Stanley Cup in Dallas and also made it to eight NHL All-Star Games.

Jere Lehtinen, the Finnish legend, was also an important cog in the Dallas Stars machine. He was part of the Stars Stanley Cup winning team of 1999 and he is about to have his number 26 retired by the Stars next season too.

Jamie Benn, the Stars current captain is a superstar in his own right too. He has made it to the NHL First All-Star team twice and has won the Art Ross Trophy once for being the leading scorer in the NHL for 2014-2015 campaign. He is only 28 years old so there is plenty more to come from him.

It is time to see the Dallas Stars Live

The former Stanley Cup Champions will be keen to reach the top of the mountain once again in the upcoming season. The American Airlines Center is expected to be packed with thousands of Stars’ fans all through the season as they root for their side from the stands. It is an important campaign for the franchise and now that the schedule is out, fans are buying Dallas Stars Single Game tickets, season tickets and series tickets.

The last thing you want to find out is when the Dallas Stars event you wanted to go to is sold-out. Don’t worry in many cases ScoreBig has affordable tickets to sold out events. We sell tickets from GA all the way to premium seating and parking. Skip the scalpers in the parking lot and get your tickets online from top Dallas Stars ticket brokers. We get you in all events, buy your Dallas Stars tickets here from a brand that many trust and rely on for all their ticketing needs.

ScoreBig offers a 100% money-back guarantee. If you have been in search of cheap tickets for Dallas Stars, ScoreBig by far is the best option. That’s why ScoreBig has more loyal customers than any other ticketing site. Shop at ScoreBig for safe and secure Dallas Stars event tickets.