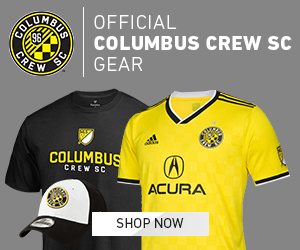 The Columbus Crew are battling for an MLS Cup this upcoming season. Along with an improved defensive core, the 2012 acquisitions of Federico Higuain and Ethan Finlay along with head coach Gregg Berhalter has given Crew fans plenty to get fired up about for the 2015 season.

With their distinctive yellow and black uniforms, storied tradition and a history of turning things around in a hurry, the Columbus Crew are one of the most exciting teams in Major League Soccer.

One of the original 10 Major League Soccer teams in the inaugural 1996 season, the Columbus Crew were founded by visionary sports magnate Lamar Hunt. In the eighteen years since then, the Crew have racked up three Supporters Shields, one MLS Cup and helped usher in a tidal wave of soccer enthusiasm in the US by becoming the first team to build a soccer-specific stadium.

After playing their first few seasons in the cavernous Ohio Stadium, Columbus Crew Stadium was the first soccer-specific stadium ever built by an MLS team, and with one of the most intensely loyal fan bases in the league, Columbus Crew games are among the best sporting events you'll ever see.

Watch one of the most exciting teams in the MLS take the field as they try to get back to the playoffs.

The last thing you want to find out is when the Columbus Crew SC event you wanted to go to is sold-out. Don’t worry in many cases ScoreBig has affordable tickets to sold out events. We sell tickets from GA all the way to premium seating and parking. Skip the scalpers in the parking lot and get your tickets online from top Columbus Crew SC ticket brokers. We get you in all events, buy your Columbus Crew SC tickets here from a brand that many trust and rely on for all their ticketing needs.

ScoreBig offers a 100% money-back guarantee. If you have been in search of cheap tickets for Columbus Crew SC, ScoreBig by far is the best option. That’s why ScoreBig has more loyal customers than any other ticketing site. Shop at ScoreBig for safe and secure Columbus Crew SC event tickets.