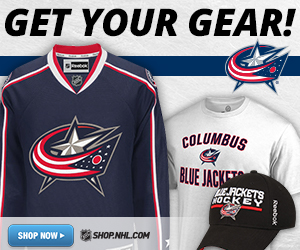 When President Abraham Lincoln requested the state of Ohio to raise ten regiments at the outbreak of the Civil War, the state responded by raising a total of 23 volunteer infantry regiments. The Columbus Blue Jackets were named to celebrate Ohio’s patriotism and rich Civil War history.

The Blue Jackets are ready for their time to shine this upcoming season. With a talented young core, Columbus has their sights set on bringing home a Stanley Cup trophy. Division rivals, the Pittsburgh Penguins,the New York Rangers, and the Detroit Red Wings will look to stand in the Blue Jackets' way.

Grab your Columbus Blue Jackets tickets and head over to Nationwide Arena to lead your team to victory.

It may be hard to find the Blue Jackets memorable moments amongst the sea of those teams with big Stanley Cup wins, nevertheless, the team is not without its iconic moments.

Returning to Playoffs –On April 9, 2014, at the America Airlines Center, Dallas, the Blue Jackets clinched their second playoff spot in the franchise history by defeating the Dallas Stars 3-1.

It takes time and competitiveness to build a great rivalry. Since the Blue Jackets are one of the newest teams in the NHL and have qualified for the playoffs only thrice, therefore, they do not have a historic rivalry yet. Nonetheless, they have a budding rivalry with,

The Blue Jackets as an expansion team may have struggled in the league, but they have produced a number of players who have gone to make exceptional careers in Columbus.

Ryan Johansen – In his first two seasons as a Blue Jacket, Johansen scored a combined 33 points in 107 games. In his next two seasons, he posted 134 points in 164 games. Johansen was drafted fourth overall in the 2010 NHL Entry Draft. And though it took him some years to develop, he nonetheless turned into a forced to be reckoned with on ice.

Sergei Bobrovsky – The famous goaltender from Russia was able to cement himself as one of the best Blue Jackets of all time in three short seasons. In his first year as the Blue Jacket, Bobrovsky was named the winner of the 2012-13 Vezina Trophy. This trophy is awarded annually to that NHL goaltender who is adjudged to be the best at this position.

At the heart of the thriving Arena District, Nationwide Arena is a spectacular place to watch a hockey game. Nationwide is the only arena in the NHL to offer a 70-foot, glass-enclosed atrium, open lobbies, and concourses that allow fans a great view of the ice as soon as they walk through the door. Dont wait for the regular season to experience Nationwide. Get your Blue Jackets preseason tickets and playoff tickets. With the thriving Arena district, fans are guaranteed to have a good time before and after any Blue Jacket contest.

To see them win big this season, get your quote on Blue Jackets season tickets price here.