Cheap Chicago Fire Tickets 2022 | ScoreBig.com
ScoreBig is a resale marketplace. Ticket prices may be above face value.
Ashburn, VA, US
All Dates
X
Sorry, there are no events. 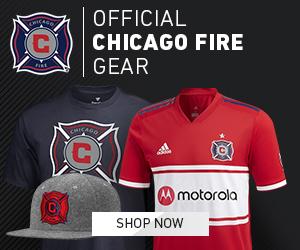 In 1997, on the 126th anniversary of the Great Chicago Fire, it was announced that a new team would be joining the MLS as part of the league’s first expansion: the Chicago Fire. Wasting no time in taking the league by storm, the Fire completed the elusive “double” by winning both the MLS Cup and the U.S. Open Cup in their inaugural season.

The Fire have since gone on to win three more U.S. Open Cup championships (2000, 2003, 2006) and one Supporters’ Shield award (2003), but to date, the MLS Cup win in their first season remains the club’s only league victory. Though the Fire have struggled to live up to the lofty standard they set upon entering the MLS, things are looking up.

Win or lose, the Chicago Fire are supported by their diehard fans in the independent supporters’ association Section 8 Chicago. Taking over a section at the Harlem End of Toyota Park, the team’s soccer-specific home stadium, the group is known across the league for their non-stop chanting at every game.

Whether you are a member of Section 8 Chicago or not, the electric atmosphere and wild cheering make Chicago Fire matches some of the most electrifying events in the Windy City. Be there live to see the Fire take on the MLS and fight for another championship.

The last thing you want to find out is when the Chicago Fire event you wanted to go to is sold-out. Don’t worry in many cases ScoreBig has affordable tickets to sold out events. We sell tickets from GA all the way to premium seating and parking. Skip the scalpers in the parking lot and get your tickets online from top Chicago Fire ticket brokers. We get you in all events, buy your Chicago Fire tickets here from a brand that many trust and rely on for all their ticketing needs.

ScoreBig offers a 100% money-back guarantee. If you have been in search of cheap tickets for Chicago Fire, ScoreBig by far is the best option. That’s why ScoreBig has more loyal customers than any other ticketing site. Shop at ScoreBig for safe and secure Chicago Fire event tickets.