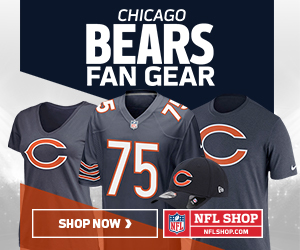 The Bears are back and have their sights set on bringing another Super Bowl title to the Windy City. Led by a high-powered offense, Chicago has positioned themselves nicely as a team to be reckoned with in a highly contested NFC North. Division rivals, the Green Bay Packers and the Detroit Lions will look to keep the Bears down in the NFC.

Grab your Chicago Bears tickets and get down to Soldier Field to be a part of your team's home field advantage.

The Chicago Bears’ 2016 NFL season was not an impressive one. The one game in which the players showed some promise was against the Detroit Lions in Week 4. Otherwise most of the season was plagued with injuries, some of whom (quarterback Jay Cutler) were crucial to the lineup. The Bears finished the season with a 3-13 record which is their worst since the NFL moved to 16-game season in 1978.

In the 2017 season, the Chicago Bears improved their record finishing 5-11. Unfortunately this was their fourth consecutive losing season. The Bears are looking to changed that in the upcoming season and qualify for the playoffs in hopes of playing for a Super Bowl trophy.

Chicago Bears is among the most storied franchises in the history of the NFL. Below are some of the memorable moments in this franchises history.

Walter Payton Breaks All-time Rushing Record - On October 7, 1984 at the Soldier Field, Chicago Bears’ running back Walter Payton broke the record of Jim Brown (1965) of Cleveland to become NFL’s all-time rushing leader. Payton carried the ball 154 yards and finished the game with an all time rushing record of 12,400 yards which was 88 more than Brown.

Among the many teams that the Chicago Bears shares rivalries with, below is one that football fans find most exciting to watch.

Bears-Packers Rivalry – Not many are aware of the fact that the intense bittersweet rivalry between the Bears and Green Bay Packers goes back farther than their first clash. The NFL began as the American Professional Football Association and while the Bears were among the founding APFA franchises, the Packers were not officially a member until the 1921 season. The latter lost the membership following the first season after it was discovered that the owner/coach of the Packers (Curly Lambeau ) illegally used college players in a game. It turned out that the man who ratted out Lambeau was the owner and coach of the Staleys (now the Bears). This incident is a sour note both teams refuse to forget.

Chicago Bears have produced numerous Hall of Famers in their illustrious history. Walter Payton played for the team for thirteen seasons. Known as Sweetness in the NFL, he is a nine-time Pro-Bowl inductee and is remembered for his versatility and his records of career rushing yards, carries and touchdowns.

Another player whose contribution to the team cannot be ignored is Richard Dent. When the Bears defeated the New England Patriots in Super Bowl XX, Dent was selected as the MVP. In this historic game, Richard blocked a pass, shared 1.5 sacks and forced two fumbles.

Soldier Field Stadium allows Bears fans to have a one of a kind game day experience rooting on their favorite team. The arena is furnished with digital kiosks that have internet access to assist fans with navigating the campus, looking up local restaurants, posting a picture to their social media page, and checking the public transportation maps and times. Soldier Field also has three ChargePoint Network electric vehicle charging stations.

Watch out for the Chicago Bears tickets this upcoming season. The upcoming games will have the Bears take on a number of tough rivals such as the Cleveland Browns and the Green Bay Packers. So don’t miss out!

The last thing you want to find out is when the Chicago Bears event you wanted to go to is sold-out. Don’t worry in many cases ScoreBig has affordable tickets to sold out events. We sell tickets from GA all the way to premium seating and parking. Skip the scalpers in the parking lot and get your tickets online from top Chicago Bears ticket brokers. We get you in all events, buy your Chicago Bears tickets here from a brand that many trust and rely on for all their ticketing needs.

ScoreBig offers a 100% money-back guarantee. If you have been in search of cheap tickets for Chicago Bears, ScoreBig by far is the best option. That’s why ScoreBig has more loyal customers than any other ticketing site. Shop at ScoreBig for safe and secure Chicago Bears event tickets.