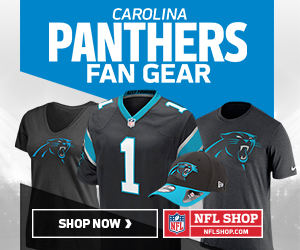 The Carolina Panthers are back and ready to make a statement in the NFC. Led by a strong defense and a young talented offense, the Panthers have their sights set on the NFC South title and bringing a Super Bowl to Carolina. Division rivals, the Atlanta Falcons and the New Orleans Saints will look to halt the Panthers’ aspirations.

Grab your Carolina Panthers tickets and head down to Bank of America Stadium and be a part of your team's home field advantage.

After a disappointing 2016 campaign, the Panthers’ star quarterback Cam Newton came back and helped his team finished the regular season 11-5. The Panthers faced the New Orleans Saints in the NFC Wild Card Playoffs but fell to the Saints 31-26. Could the upcoming season be a year for the Panthers to make it further in the playoffs and compete for a Super Bowl title?

The fourth youngest team in the NFL, the Carolina Panthers has had a rollercoaster ride till now. After their formation in 1995, the team enjoyed a rapid climb to the top that was followed by an even steeper fall.

An All-time Best First Season – The Panthers debut was a notable one as they finished the season 7-9, which is an all-time best for any new NFL team. Their winning form continued in 1996 as the team advanced all the way to the NFC Championship Game. They eventually lost to Super Bowl champions, the Green Bay Packers. The Panthers clinched their first NFC West Division title that year.

The 2003 Carolina Panthers – It was a magical season for the Panthers and finally after making a strong push for the championship, they reached the Super Bowl XXXVIII. They lost to the New England Patriots 29-32 but not before putting up a great fight. It was an overall stellar season which earned them the nickname of Cardiac Cats as they would force overtime and find a way to come out on top.

2015 Super Bowl Return – Once again the Panthers had to face defeat, this time at the hands of the Denver Broncos. The loss came with a wide margin of 10-24. For the Panthers, the road to the Super Bowl was an extraordinary one. It includes the stunning front-flipping from Cam Newton in a game against the Houston Texans. In the third quarter with the game tied 10-10, Newton in an attempt to score touchdown jumped and when he was hit, he flipped and managed to land in the end zone. The touchdown became the highlight of the 2015 season.

The Panthers share heated rivalries with the Tampa Bay Buccaneers and the Atlanta Falcons.

The Panthers – Tampa Bay Buccaneers Rivalry – The rivalry seeds were sown in 2003 when the teams started playing each other twice after being moved to the South Division. Their games have often gotten physical, to the extent that players have suffered serious injuries.

Falcons–Panthers Rivalry – It started in 1995, surprisingly when the Panthers played their first ever game. In a thriller overtime, the Falcons defeated the newbie 23-20 and it left the team Carolina with a bitter taste. Playing in the same division, their encounters have always been close ones, marked with extreme intensity and spectacular performances.

The early Panthers played some of the best football on the shoulders of Kevin Greene, Sam Mills and Lamar Lathon. They formed a lethal line backing core that weakened the opposition’s offense and helped the team reach the top.

Steve Smith, Julius Peppers and Jake Delhomme led the Panthers to their first Super Bowl in 2003. Smith and Mushin Muhammad are considered the best receiving duo in Panthers’ history. In the present era Cam Newton proudly wears the Panthers blue and black jersey. In a very short time Newton has become one of the best quarterbacks in the NFL and was given the 2016 Best NFL Player ESPY Award.

The roars of passionate Panthers fans fill the Bank of America Stadium every time the team plays its home game. Unique elements such as massive arches and towers at the entrance provide the fans with beautiful mosaics to go along their game day experiences. Currently there are six open-air sections on the upper deck called the “fan plazas” that allow the fans to take a break from the action and take in the views of Charlotte.

Keep an eye on the Carolina Panthers Season tickets as the latest schedule is out. The upcoming seasons campaign includes home and away games, pitting the Panthers against its arch rivals as well as the other major NFL teams

The last thing you want to find out is when the Carolina Panthers event you wanted to go to is sold-out. Don’t worry in many cases ScoreBig has affordable tickets to sold out events. We sell tickets from GA all the way to premium seating and parking. Skip the scalpers in the parking lot and get your tickets online from top Carolina Panthers ticket brokers. We get you in all events, buy your Carolina Panthers tickets here from a brand that many trust and rely on for all their ticketing needs.

ScoreBig offers a 100% money-back guarantee. If you have been in search of cheap tickets for Carolina Panthers, ScoreBig by far is the best option. That’s why ScoreBig has more loyal customers than any other ticketing site. Shop at ScoreBig for safe and secure Carolina Panthers event tickets.