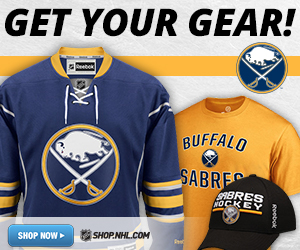 The Sabres are locked and loaded and are ready to make some noise in the Atlantic Division. With a revamped roster and a promising young core, Buffalo have their sights set on claiming the division crown and making a run at the Stanley Cup. They will have to overcome division rivals the Detroit Red Wings and the Boston Bruins on their quest for hockey glory.

Grab your Buffalo Sabres and be there to cheer on your team on their championship journey.

The Sabres will be looking to turn things around after a few underwhelming campaigns. The last time they made it to the playoffs was at the end of the 2010-2011 season. Now is the time for them to bounce back.

If you want to see how the season pans out for them, book your Buffalo Sabres tickets and watch them play live.

Chris Drury steps up for the Sabres - In the 2007 NHL playoffs, the Sabres were up against the formidable New York Rangers. The series was tied at 2-2 when the two teams moved to the HSBC Arena for Game 5 on May 4, 2007. Maxim Afinogenov scored the winning goal in four minutes and thirty nine seconds in overtime to win the game for the Sabres but it was Chris Drury’s goal that was more important. The Rangers were just seven seconds away from taking a 3-2 lead when Drury stepped up to score the goal that tied the game at 1-1. Had he not scored that goal, there would have been no heroics from Afinogenov. The Sabres won the next game to take the series 4-2.

May Day - The Buffalo Sabres came into the 1993 Divisional Semifinals against the Bruins on the back of suffering five straight eliminations at the exact same stage of the season over five years. The Bruins were responsible for three of those losses. It was a jinx that needed to end. The Sabres took a 3-0 lead in the series and the two sides squared off at the Buffalo Memorial Auditorium for Game 4. Brad May scored the winning goal in OT to ensure the Sabres’ progression past the Divisional playoffs finally. Rick Jeanneret’s iconic May Day! May Day! May Day! call has also gone down in history as one of the most memorable moments in NHL.

The Buffalo Sabres have developed rivalries with multiple teams over the years. The rivalries against the Boston Bruins and the Toronto Maple Leafs however, stand out.

Sabres-Bruins Rivalry - The Buffalo Sabres and the Boston Bruins have been members of the same division ever since the former joined the NHL in the year 1970. The rivalry between these two sides really kicked off between 1982 and 1993 where these two sides met in the playoffs on six occasions. The Bruins won each of the first five series while the Sabres came out on top in 1993. They have since met twice in the playoffs. In 1999 the Sabres won whereas the Bruins won in 2010. That was the last time these two teams met in the postseason.

Opened in 1996, the KeyBank Center (Formerly the First Niagara Center)is everything a modern arena should be. Great food. Great drinks. Excellent sight lines. It offers great fan amenities as The Labatt Blue Zone, which is made up of timeline of Sabres history and offers great views of Downtown Buffalo.

Take in the views and get your first look at the future of Buffalo with Sabres preseason tickets.

The KeyBank Center took the place of the Buffalo Memorial Auditorium and has been one of the most famous venues in the entire country ever since. Garth Brooks, Trisha Yearwood, Blake Shelton, Kanye West, the Tran-Siberian Orchestra and AC/DC among other major names from the world of music have performed here regularly. On top of that, it has also hosted multiple WWE pay-per-view and weekly World Wresting Entertainment events too.

Dominik Hasek played for the Buffalo Sabres between 1992 and 2001 and during that time, he delivered some stellar performances. As a Sabre, he won half a dozen Vezina Trophies, two Lester Pearson Trophies, two William Jennings Trophies and two Hart Trophies.

Gilbert Perreault spent his entire career with the Sabres. He played 1,191 games, scored 512 goals, recorded 814 assists and amassed a whopping 1,326 points which are all Sabres records. Perreault also made eight All-Star and one Challenge Cup appearances.

Rick Martin was a member of the Buffalo Sabres roster between 1971 and 1981. With Gilbert Perreault and Rene Robert, he was part of the famous French Connection. He scored 382 goals and amassed 695 points for the franchise. The Sabres have retired his number 7.

Catch the Buffalo Sabres in Action

The Buffalo Sabres have a lot of work to do this year and they will have to hit the ground running to get some momentum on their side. Check out the NHL schedule for the upcoming season and get your cheap Buffalo Sabres tickets to watch them in action. It is all set up to be a very important campaign for the Sabres.

The last thing you want to find out is when the Buffalo Sabres event you wanted to go to is sold-out. Don’t worry in many cases ScoreBig has affordable tickets to sold out events. We sell tickets from GA all the way to premium seating and parking. Skip the scalpers in the parking lot and get your tickets online from top Buffalo Sabres ticket brokers. We get you in all events, buy your Buffalo Sabres tickets here from a brand that many trust and rely on for all their ticketing needs.

ScoreBig offers a 100% money-back guarantee. If you have been in search of cheap tickets for Buffalo Sabres, ScoreBig by far is the best option. That’s why ScoreBig has more loyal customers than any other ticketing site. Shop at ScoreBig for safe and secure Buffalo Sabres event tickets.