Atlanta Falcons Tickets | Atlanta Falcons | ScoreBig.com
ScoreBig is a resale marketplace. Ticket prices may be above face value.
Ashburn, VA, US
All Dates
X
Sorry, there are no events. 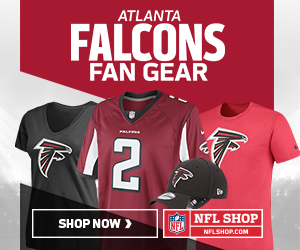 The Atlanta Falcons went all the way to the Super Bowl LI to take on the New England Patriots in 2016. They had one hand on the trophy as they led the Pats by 25 points in the third quarter. But the Patriots roared back to win the game in OT and lift the Vince Lombardi Trophy. Despite the heartbreaking end, it was a stellar season for the Falcons.

The 2017 season was impressive as well. The Falcons finished 10-6 qualifying them for the playoffs. They unfortunately lost to the Philadelphia Eagles 15-10 in the NFC Divisional Playoffs.

Regardless of losing in the playoffs, they will be looking to regroup in the upcoming season.

The Falcons are back and have their sights set on bringing a Super Bowl title back home. Led by a high-powered offense and a hungry defense, Atlanta is ready to take over the reigns in the NFC South. Division rivals, the Carolina Panthers and the New Orleans Saints will look to crush the Falcon's hopes. Get your Atlanta Falcons tickets and head down to the Georgia Dome to be a part of your team's rise to the top.

In 2016, the Atlanta Falcons came out of nowhere to reach Super Bowl LI. This was their first Super Bowl appearance since 1998. The Atlanta Falcons might have gone through some tough times of late but they have still given their fans plenty of memorable moments over the years.

Michael Vick’s First Game -Michael Vick was the first overall pick in the 2001 NFL Draft. September 23, 2001 was the day when he took to the field for the first time as a Falcons player, at home. They were up against the Panthers that day and Vick made sure that everyone was talking about him after the game. He marked his debut by scoring his first ever touchdown for the Falcons and played a big part in helping his side win the game.

The Incredible Comeback - On January 13, 2013 the Atlanta Falcons were leading the On January 13, 2013 the Atlanta Falcons were leading the Seattle Seahawks by a whopping twenty points at halftime. They somehow managed to blow their lead and trailed 28-27 with only half a minute left on the clock. The Falcons were not about to give up though. Matt Bryant stepped out with just a few seconds left on the clock and hit a sensational 49 yard field goal to put the Falcons in front. The Falcons were able to save the game thanks to the heroics of Bryant with the final score at 30-28

The First Conference Title -The Atlanta Falcons fans will remember the 1998 season forever. It was their then head coach Dan Reeves’ second year at the helm of the franchise and the Falcons had not even made it to the playoffs in the two campaigns leading up to the 1998 season. The Falcons however not only topped the division but also beat the Minnesota Vikings 30-27 in OT to clinch their first ever conference title.

They lost to the Denver Broncos in Super Bowl XXXIII but it was still a season that will go down in the Falcons history books as the one that put the franchise on the map.

The Atlanta Falcons have heated rivalries with New Orleans Saints and the Carolina Panthers .

Falcons-Saints Rivalry - The Atlanta Falcons and the New Orleans Saints squared off against each other for the first time on November 26, 1967. That game was won by the latter 27-24. Barring the Falcons debut campaign, these two sides have shared the same division. As of the end of the 2016 season, the Atlanta Falcons hold the lead in the head to head record by recording 51 wins to the Saints’ 45.

Falcons-Panthers Rivalry - The rivalry between the Atlanta Panthers and the Carolina Panthers might not be as historic as the one between the Falcons and the Saints, it is still a very heated one. The Falcons squared off against the Panthers for the first time on September 3, 1995, with Atlanta winning 23-20. As of the end of the 2016 season, the Falcons lead the head to head record by 27-17. The Falcons have had the upper hand recently as well as they have won the last three encounters against the Panthers.

The Atlanta Falcons have had some great players play on their roster over the years. They owe a lot of their success to these exceptional athletes.

Jessi Tuggle began his career with the Falcons in 1987 and retired with them in 2000. During his tenure, he won five Pro Bowl picks and won the NFC title in 1998. The Falcons have retired his number 58. Then there was Roddy White, who also played for the Falcons for the entirety of his career (2005-2015). He won four Pro Bowl picks during that time.

Last but definitely not the least, there was Jeff Van Note who famously missed only four games during his entire career (1969-1986). He also made it to 5 Pro Bowls and the Falcons have retired number 57 in his honor.

The worlds largest cable supported stadium is located in downtown Atlanta and has a 74,000 seating capacity. Additionally, every seat from the lower to the upper deck has a great unobstructed view of the field and the arena's dome shape allows fans to really add to the Falcons home-field advantage. Georgia Dome's location also allows fans to visit and explore Atlanta staples: The Georgia Aquarium, Coca-Cola World, and CNN Studios.

Atlanta Falcons tickets are in demand. Their fans are keen to see how their favorite side performs this year after going all the way to NFL’s showpiece encounter.

Watch as the Falcons get ready to take on the upcoming NFL season.

The last thing you want to find out is when the Atlanta Falcons event you wanted to go to is sold-out. Don’t worry in many cases ScoreBig has affordable tickets to sold out events. We sell tickets from GA all the way to premium seating and parking. Skip the scalpers in the parking lot and get your tickets online from top Atlanta Falcons ticket brokers. We get you in all events, buy your Atlanta Falcons tickets here from a brand that many trust and rely on for all their ticketing needs.

ScoreBig offers a 100% money-back guarantee. If you have been in search of cheap tickets for Atlanta Falcons, ScoreBig by far is the best option. That’s why ScoreBig has more loyal customers than any other ticketing site. Shop at ScoreBig for safe and secure Atlanta Falcons event tickets.