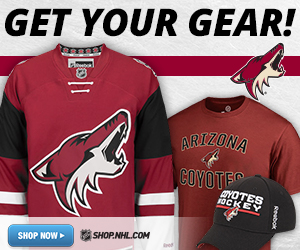 The Coyotes are back and are ready to generate hockey success in the desert this upcoming season. Led by a group of determined up-and-comers and hungry veterans, Arizona wants to claim the Pacific Division and bring home a Stanley Cup. Division rivals, the San Jose Sharks and the Los Angeles Kings will fight to keep the Coyotes down.

Grab your Arizona Coyotes tickets and head down to Gila River Arena and contribute to your team's home ice advantage.

The Coyotes have shown improvement from their disastrous 2014-15 season. The 2016 NHL season, however, still wasn’t as good as the Coyotes would have wanted it to be. They closed out the 2016-17 season with a 3-1 loss to Minnesota Wild and finished the year with a 30-42-10 record. This most recent season did not show so much promise. The Coyotes finished dead last in the Western Conference for 2018. But with a few young new players on the roster, the upcoming season could be a turning point for this Arizona team.

The Arizona Coyotes have been going through a rebuilding phase. Arizona advanced to the Western Conference Final in 2012 and after that they haven’t made it to the Stanley Cup Playoffs. Now they have made some offseason moves and things are looking up.

The changes include the exit of Dave Tippett, who had been the second-longest tenured coach. Rick Tocchet has replaced him. With one of the youngest rosters in the NHL featuring promising forwards Max Domi and Christian Dvorak, the Coyotes also have defenseman Oliver Ekman-Larsson, an established All-Star. The future looks bright for the Coyotes.

The First White Out - It was April 20, 1997, the Coyotes (originally Winnipeg Jets) were to play their first NHL playoff game in Phoenix in the Western Conference quarterfinals. They squared off against the Anaheim Mighty Ducks and defeated them 4-1. Importing a Winnipeg tradition, thousands of fans came to the America West Arena dressed in white to show their support for the team.

Beating the Blackhawks - When the Coyotes met the Blackhawks in the first round of the 2012 Western Conference playoffs, things appeared to be in favor of the Blackhawks. Chicago had the edge with many recognizable All-Star players and was only a series away from winning its first Stanley Cup in 49 years. But Coyotes (then Phoenix) turned the tables. In the sixth game with an impressive 4-0 score, they won the franchise’s first-ever playoff series. Goalie Mike Smith played an instrumental role in the series success.

Rivalry with the Los Angeles Kings - Since the Coyotes came to Arizona in the 1996-97 season, the two sides have faced one another 121 times in the regular season and 5 times in the playoffs. The games between the two teams have always been hard-hitting and well fought.

The rivalry peaked in 2012 when the Coyotes were defeated by the Kings in the Western Conference Finals of the Stanley Cup Playoffs. Yotes had made it to the Western Conference Finals for the first time since arriving from Winnipeg in 1996. And to lose to the Los Angeles Kings in a 4-1 series stung bitterly. The series was a controversial one though. Dustin Brown hit Michal Rozsival on a knee-to-knee check which injured Rozsival but no penalty was called which annoyed the Coyotes. The rivalry however has cooled off over the years. This is due to the fact that Coyotes haven’t made any playoff appearances. The regular season games however can still be a delight to watch.

Rivalry with the Detroit Red WingsArizona Coyotes fans consider the Detroit Red Wings as their main rivals owing to the history of the Stanley Cup Playoffs. The two sides have met in the playoffs three times. Unfortunately for them all series against them have had the same result and they have not been able to move past the first round. So while Coyotes fans consider them as their main rivals, Detroit Red Wings fans think it is a one-sided rivalry. However the games between them have always had a charged atmosphere and the contests are always intense.

Among the greatest player that Coyotes have had, Shane Joan’s name stands out. His name goes down as the most consistent player who has displayed impressive leadership skills throughout his tenure. Joan is a two-time All-Star (2004 & 2009). In 2015 he became the franchise's all-time leading goal scorer and also remains the longest serving captain of the Coyotes (2003 to 2017).

Another player worth mentioning here is Keith Tkachuk. A brilliant goal-scorer with a strong domineering physical presence on the ice, Tkachuk was quite popular with the fans. He led the NHL in goals with 52 in 1997 and became the first American-born player to achieve the feat. He scored 50 goals twice in his career with the Coyotes. Tkachuk was named to the Coyotes Ring of Honor in 2011.

Opened a decade ago in the heart of Glendale, the Coyotes have one of the best hockey arenas in the world. With the ownership situation finally behind them, the Coyotes are ready to rise. Don't miss your opportunity to see the next generation of NHL players with Arizona Coyotes preseason tickets. There are ZERO bad seats at Gila River Arena.

If you want to catch the Yotes throughout the upcoming NHL season, get Arizona Coyotes season tickets from here now.

The last thing you want to find out is when the Arizona Coyotes event you wanted to go to is sold-out. Don’t worry in many cases ScoreBig has affordable tickets to sold out events. We sell tickets from GA all the way to premium seating and parking. Skip the scalpers in the parking lot and get your tickets online from top Arizona Coyotes ticket brokers. We get you in all events, buy your Arizona Coyotes tickets here from a brand that many trust and rely on for all their ticketing needs.

ScoreBig offers a 100% money-back guarantee. If you have been in search of cheap tickets for Arizona Coyotes, ScoreBig by far is the best option. That’s why ScoreBig has more loyal customers than any other ticketing site. Shop at ScoreBig for safe and secure Arizona Coyotes event tickets.