Arizona Cardinals Tickets | Arizona Cardinals | ScoreBig.com
ScoreBig is a resale marketplace. Ticket prices may be above face value.
Ashburn, VA, US
All Dates
X
Sorry, there are no events. 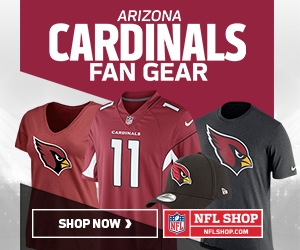 Founded in 1898 as the Morgan Athletic Club, the Arizona Cardinals have competed in the National Football League (NFL) since 1920.

And now, all ready for the upcoming season, the Cardinals are back and have their sights set on bringing a home a Super Bowl trophy. Led by a shut down defense and a highly skilled offense, Arizona is ready to take on and conquer the competitive NFC West. Division rivals, the San Francisco 49ers and the Seattle Seahawks will look to halt the Cardinal's aspirations.

Grab your Arizona Cardinals tickets and head over to the Univeristy of Phoenix Stadium and be a part of your teams' much needed home field advantage.

Greatest Moments for the Arizona Cardinals

The 2006 Chicago Bears vs. Arizona Cardinals Game – “Monday Night Comeback” - The game that took place on October 16, 2006, during the sixth week of the NFL season at the University of Phoenix Stadium set many records. The Chicago Bears defeated the Cardinals 24-23 in an epic encounter. This was the first game in which the Bears were victorious after trailing by 20 points or more since 1987. The Cardinals became the first team in the history of the NFL to lose back to back games in a season after having a 14-point lead at the end of the first quarter.

The Chicago Bears also set the record for the biggest comeback without scoring an offensive touchdown. The record-setting game also saw the Cardinals’ quarterback Matt Leinart become the first quarterback to throw at least two touchdown passes in both of his first two career starts.

Arizona Cardinals vs. Buffalo Bills - “One Hand Miracle” - Taking place in the Week 3 of the 2016 season, the game between the Arizona Cardinals and the Buffalo Bills gave football fans with one of the most epic plays ever. The Arizona side got off to a slow start and fell behind the Buffalo Bills, 10-0, through the first quarter. Even though the Cardinals wound up losing the game, 33-18, it was a moment of pure brilliance by Patrick Peterson that made headlines. As Tyrod Taylor from the Bills threw a deep ball early in the second quarter, Peterson dived and made a one-hand interception down the sideline before going out of bounds.

Rivals of the Arizona Cardinals

The biggest rivals of the Arizona Cardinals are without a doubt the Seattle Seahawks .

The Seattle Seahawks have played against the Arizona Cardinals a total of 36 times, out of which the Cardinals have lost 17 times and won 18 times, with 1 game tied. With both teams being equally good and in the same division, it is not hard to imagine that they would have an intense rivalry. This rivalry began at the end of 2013 season, when the Cardinals hired Bruce Arians and traded for Carson Palmer.

Their season record of 10-6 included a rare 17-10 victory against the Seattle Seahawks in Week 16.The Seahawks managed to win against the Cardinals in 2014 without Palmer, but when Palmer returned to the Cardinals’ side in 2015, the Arizona team roared to the top of the NFC West. This run included a 39-32 comeback win over rivals, Seattle.

With the season right around the corner, the two teams still happen to be among the favorites for Super Bowl, intensifying the rivalry more.

The Greatest Cardinals of All-Time

The Cardinals have had quite a few big names on their roster, over the years - Jake Plummer being one of them. The quarterback graduated from the Arizona State University and was drafted by the Cardinals in the second round of the 1997 NFL Draft. He has thrown more than 15,000 yards for the Cardinals and helped the team achieve an epic win against the Dallas Cowboys, 20-7, the franchise’s first playoff win in 51 years.

Another big name from the Cardinals’ side is wide receiver, Roy Greene. He tallied 2,597 receiving yards during his time with the team, along with 18 touchdowns.

Darnell Dockett, the Defensive End selected by the Cardinals in the third round of the 2004 draft managed to rack up 36 sacks, four interceptions and seven forced fumbles during his time with the Arizona Cardinals.

About the Stadium – The University of Phoenix Stadium

Located in Glendale, Arizona, this 63,000 seat stadium provides Cardinals fans with a unique game-day experience. University of Phoenix Stadium features the first fully retractable natural grass playing field in North America. The stadium also features a mural on each level. Each mural is designed to represent Arizona's environmental attractions and representing the history of the Cardinals with murals depicting Arizona greats.

Arizona Cardinals and the Upcoming Season

The Cardinals are all geared up to make an impact in the upcoming season, being one of the favorites in their division.

The last thing you want to find out is when the Arizona Cardinals event you wanted to go to is sold-out. Don’t worry in many cases ScoreBig has affordable tickets to sold out events. We sell tickets from GA all the way to premium seating and parking. Skip the scalpers in the parking lot and get your tickets online from top Arizona Cardinals ticket brokers. We get you in all events, buy your Arizona Cardinals tickets here from a brand that many trust and rely on for all their ticketing needs.

ScoreBig offers a 100% money-back guarantee. If you have been in search of cheap tickets for Arizona Cardinals, ScoreBig by far is the best option. That’s why ScoreBig has more loyal customers than any other ticketing site. Shop at ScoreBig for safe and secure Arizona Cardinals event tickets.