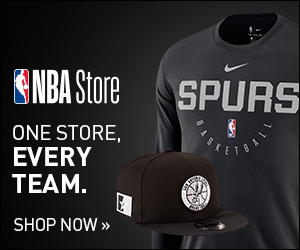 The 2016-17 NBA season was the first that the Spurs played without Tim Duncan. The legendary basketball player retired in July of 2016, ending his 19-year career with the franchise. With Duncan drafted in 1997, the Spurs never missed the playoffs. During the 2016-17 season, the team finished 1st in their division, entered the playoffs and went all the all way to Conference Finals. They were routed by the Golden State Warriors (4-0) however.

The 2017-18 season was difficult for the Spurs with star player Kawhi Leonard suffering an injury most of the season. The Spurs finished the regular season in third place in the Southwest Division which did qualify them for the playoffs. But Coach Popvich and his team could not match up to the talent level of the Golden State Warriors. The Spurs fell to the Warriors, losing the series 4-1.

Now the Spurs have their sights set high for this upcoming season. With a roster loaded with determined veteran talent and hungry young guns, San Antonio looks set to reign atop of the Southwestern Division and bring home another NBA championship. Division rivals, the Houston Rockets and the Dallas Mavericks will look to prevent the Spurs aspirations. Grab your San Antonio Spurs tickets and head down to the AT&T center to lead your team to a championship.

The San Antonio Spurs have been part of some classic NBA rivalries over the years. Mentioned below are the ones that stand out.

From 1999 until 2004, the Lakers-Spurs rivalry was considered the best in the league as each time the two sides faced off, the winner advanced to the NBA Finals. It got a little less intense from 2005 to 2007 when the Lakers missed the playoffs in 2005 and lost in the first round to the Phoenix Suns in 2006 and 2007.

In 2006, the Mavericks claimed their first playoff series win in a rather controversial seven-game series. Its result was determined in overtime of Game 7 in San Antonio.

In the 2009 playoff series despite the best efforts of San Antonio players such as Duncan and Parker, the Mavericks were able to beat the Spurs.

The Spurs bounced back the following year, becoming the first 7th seed team to beat a second seed in the NBA first round playoff history.

Overall, the Mavericks and Spurs have clashed 172 times in the regular season games.  The Spurs are in the lead with 105 wins while the Mavericks have 67 victories to their credit.

Over the years, hundreds of talented players have donned the San Antonio Spurs’ uniform. Mentioned below are a few of them.

Playing his entire career as part of the Spurs, Duncan has appeared in all of the team’s five NBA championships. He has won the NBA Most Valuable Player award twice and the NBA Finals Most Valuable Player award thrice. Besides he is a 15-time NBA All-Star and the only basketball player who has been selected in both All-NBA and All-Defensive Teams in all of his first thirteen seasons.

Robinson is a two-time NBA Champion, 1995 NBA MVP and a 10-time NBA All-Star. He has received the esteemed Naismith Memorial Basketball Hall of Fame induction twice; first for his individual career in 2009 and second as a member of the Olympic Men basketball team of the US in 2010.

Located in the heart of San Antonio, the AT&T Center is a great place to watch a basketball game. The fans get loud and you can definitely feel a home-court advantage anytime the Spurs step on the floor. Fans can also visit the world famous Alamo anytime they make a trip to a Spurs game.

The schedule for the upcoming NBA preseason and regular season has been announced. Players are vigorously training and planning for the upcoming campaign. Although Tony Parker is not taking part in the training camp as of now, it doesn’t mean that he has changed his plans of returning to the court in November. The Spurs are just being cautious about the return of the 35-year old four-time NBA Champion.

San Antonio Spurs tickets are selling out fast. Get yours now if you wish to catch the exciting basketball action live.

The last thing you want to find out is when the San Antonio Spurs event you wanted to go to is sold-out. Don’t worry in many cases ScoreBig has affordable tickets to sold out events. We sell tickets from GA all the way to premium seating and parking. Skip the scalpers in the parking lot and get your tickets online from top San Antonio Spurs ticket brokers. We get you in all events, buy your San Antonio Spurs tickets here from a brand that many trust and rely on for all their ticketing needs.

ScoreBig offers a 100% money-back guarantee. If you have been in search of cheap tickets for San Antonio Spurs, ScoreBig by far is the best option. That’s why ScoreBig has more loyal customers than any other ticketing site. Shop at ScoreBig for safe and secure San Antonio Spurs event tickets.