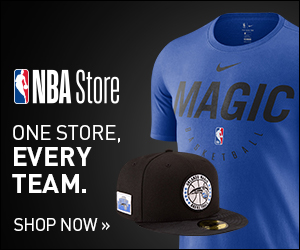 Founded in 1989, the Orlando Magic may not have the years or the experience. What they have achieved in a relatively short period of time is success. The Orlando Magic are the second most successful of the four expansion teams established in 1988 and 1989 in terms of winning percentage. As of 2017, the team has played in 28 seasons, out of which it has made it to the playoffs 14 times.

In addition, the Magic have been to the NBA Finals twice. This impressive record has been possible by the likes of Shaquille O’Neil, Vince Carter, Tracy McGrady, Grant Hill and Patrick Ewing, among others. And though the team has not been to the playoffs since 2011-12, with players like Aaron Gordon and Nikola Vucevic on the roster, the team’s upcoming season could be different.

The Magic are locked and loaded and are poised to make themselves known in the Eastern Conference. Led by a highly talented youthful core, Orlando is ready to reign atop of the Southeast Division and bring home an NBA championship. Division rivals, the Miami Heat and the Charlotte Hornets will look to stand in their way.

Get your Orlando Magic tickets and head down to the Amway Center to be a part of your team's championship run.

Down Memory Lane with the Orlando Magic

The Magic were the first pro sports team in the city of Orlando. As one of the youngest teams in the NBA, only 28 years of age, the Orlando Magic has seen many ups and downs. They have also produced some of the greatest moments in professional basketball history.

Shaq “The Rookie” O’Neil Not many had heard of Shaquille O’Neil in 1993. However all that changed on November 20. The Magic were playing against the Nets at home at the Izod Center, when the young rookie gave one of the best performances of his career. With 24 points, 28 rebounds, three assists and an unheard of 15 blocks, Shaq simply obliterated the Nets. Shaq’s 15 blocks are an NBA record since 1985 as well as a franchise record with little chance of being broken.

T-Mac, The 62-Pointer On March 10, 2004, at the TD Waterhouse Center, Orlando, Tracy McGrady did what very few had done before – he dropped 62 points. And that’s not all. With 10-rebounds, and 5-assists, he ended the game with a 20-for-37 shooting average. With this performance, T-Mac joined the elite club of only 15, who had scored 60 points or more in a game.

The Magic and the Rivals

Miami Heat is one of the biggest rivals of the Magic. In addition, the Atlanta Hawks are also Magic’s biggest competitors, especially when it comes to the playoffs.

Magic-Heat – The Orlando Magic and the Miami Heat rivalry is essentially an intra-state rivalry, since both are Florida-based teams. This rivalry is also called the Sunshine State rivalry. The fact that both teams have attracted some of the biggest stars, it has further intensified the rivalry. With Dwight Howard and Dwyane Wade in Orlando and Chris Bosh and LeBron James in Miami, the Sunshine State rivalry sizzled from 2010 till 2014. In addition to their regular season games, the two have also met once in the playoffs, the contest which the Heat won. The rivalry has somewhat softened with the departure of Dwight Howard.

Magic – Hawks – This is essentially a playoff rivalry where the two teams have met twice in the playoffs in 2010 and 2011. The rivalry is equally balanced as the Magic swept the Hawks in 2010, while the Hawks took their revenge the following year.

For a 28-year young team, the Orlando Magic have amassed impressive statistics. 28 years of existence isn’t a long time for a sports franchise to boost names of ace-basketball players, but then the Magic are no ordinary team, thanks to these on court “magicians”.

Shaquille O’Neil – The Shaq was perhaps one of the greatest centers to ever play the game. An exceptional player and human being, both on and off the field, Shaq combined size, strength, agility and athleticism. His personality made him an incredibly likeable person who could connect with the fans, unlike some of his contemporaries.

Anfernee Hardaway – “Penny” Hardaway could have been the best point guard of all-time had it not been for his injuries. Nonetheless, Hardaway scored, rebounded and distributed the basketball like no other and his duo with Shaq took Orlando to NBA Finals once.

Dwight Howard – Howard may be no Shaq, but when it came to rebounding and shot-blocking, Howard was as good as Shaq. He led the Magic to the NBA Finals in 2009 and then again in the Eastern Conference Finals in 2010.

Whether you’re coming to town to see Mickey and the gang or you’re a local, a trip to the sparkling new Amway Center is an absolute must. Opened in 2010, the arena hosted the 2013 All-Star Game and is easily one of the best buildings in the league. Fans can enjoy festivities before and after contests with the fan fest plaza and the arena features a rooftop lounge that offers fans a chance to keep the party going and enjoy some of the best views of downtown Orlando.

Of course, the Magic fans would want to see one more thing with these tickets – their team making the playoffs. So, get your tickets here and see the Magic work their “magic” again.

The last thing you want to find out is when the Orlando Magic event you wanted to go to is sold-out. Don’t worry in many cases ScoreBig has affordable tickets to sold out events. We sell tickets from GA all the way to premium seating and parking. Skip the scalpers in the parking lot and get your tickets online from top Orlando Magic ticket brokers. We get you in all events, buy your Orlando Magic tickets here from a brand that many trust and rely on for all their ticketing needs.

ScoreBig offers a 100% money-back guarantee. If you have been in search of cheap tickets for Orlando Magic, ScoreBig by far is the best option. That’s why ScoreBig has more loyal customers than any other ticketing site. Shop at ScoreBig for safe and secure Orlando Magic event tickets.