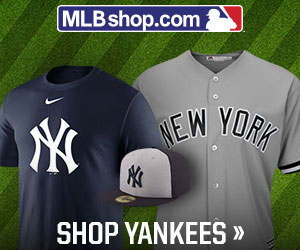 A Yankee baseball ticket is a ticket to a great night out. With countless record-breaking milestones and more championships than any team in the history of professional sports, Yankees tickets have been a hot commodity. New York looks to defeat the Red Sox and the Orioles and get back to the top of the AL East. The Yanks also look to keep the crown of New York's best team over the Mets.

Grab your New York Yankee tickets and head over to Yankee Stadium to cheer your team on it's title hunt.

The New York Yankees are the most dominant baseball team in MLB history and now the time has come for them to show their mettle once again. The Yankees last won the World Series in 2009 and have struggled a little of late as well. They have made one trip to the postseason in the past four years, but they will be looking to turn this around this season.

Like always, their fans are behind them and New York Yankees tickets are in demand.

1977 World Series Game 6 - The New York Yankees were up against the Los Angeles Dodgers in the 1977 World Series. The series moved to New York for Game 6 with the Yankees leading 3-2. Game 6 took place at the Yankee Stadium on October 18, 1977, with the Yankees just one win away from winning their first World Series since 1962. Reggie Jackson stepped up to the plate and blasted three home runs to seal the title for the Yankees. There is a reason why Reggie was called Mr. October.

The Farewell Speech by Lou Gehrig - June 19, 1939, was the day when one of the greatest players in baseball history, Lou Gehrig got the news that he has Amyotrophic Lateral Sclerosis, a disease that had no cure. Gehrig was only 36 years old at the time. On July 4, 1939, The Iron Horse gave his farewell speech. Gehrig, like the champion that he was, thanked everyone and spoke very little about him and what he had achieved. The speech will forever be remembered as one of the greatest speeches in sports history.

Babe Ruth Joins The Yankees - Babe Ruth played for the Boston Red Sox from 1914 to 1919 and won three World Series with the franchise. He was the best player in baseball at the time and then all of a sudden, he was traded to the New York Yankees. The Yankees were a struggling side back then, but the arrival of Ruth changed the dynamics of the team. He won four World Series in the Big Apple and cemented his reputation as one of the greatest players in baseball history.

Yankees-Red Sox Rivalry - The rivalry between the New York Yankees and the Boston Red Sox is considered among the fiercest in the MLB. The roots of this rivalry can be traced back to the Babe Ruth’s trade from Boston to New York. The Red Sox were the most dominant team back then, but in 1919, they sold their biggest star to the struggling Yankees. Fortunes were reversed almost immediately as the Yankees became the team to beat while the Red Sox would fail to win the World Series for the next eighty-six years.

Yankees-Mets Rivalry - The games between the New York Yankees and the New York Mets are also referred to as the Subway Series. Before interleague play was allowed in the MLB, the Mets and the Yankees only squared-off against each other in exhibition games. Since the arrival of interleague play in the MLB, the Yankees and the Mets have taken on each other regularly since 1997. The Yankees lead the head to head regular season record against the Mets. These two sides have met in the playoffs only once and that was in the 2000 World Series. The Yankees came out on top on that occasion, 4-1.

A NY Yankees ticket gets you a first-hand look at the brand new Yankee Stadium. Fans can also enjoy the New York Yankees Museum where fans can see pieces of Yankee history that include a "ball wall" and sculptures commemorating several Yankee legends. Yankee tickets are not only tickets to a ball game but your way in to experience history.

The New Yankee Stadium played host to the World Series for the first time in its inaugural season in 2009. The Yankees clinched the World Series against the Phillies that year. The ballpark has also been host to a few college football games and on January 26, 2014, hosted an NHL clash between the New Jersey Devils and the New York Rangers as part of the NHL Stadium Series. Music stars like Jay-Z, Eminem, Metallica, Paul McCartney and Garth Brooks among others have also performed at the New Yankee Stadium.

The Greatest Yankees in History

The New York Yankees fans have seen some of the greatest players in history play for their team over the last century. Babe Ruth is without a doubt one of those. Ruth was the catalyst that kick-started the Yankees juggernaut and won four World Series with them. He also won two All Star picks as a Yankee and his number three has been retired by the franchise.

Lou Gehrig played for the New York Yankees between 1923 and 1939 and during that time won six World Series titles, became a seven-time All-Star and also was declared the AL MVP twice. The Yankees have retired his number 4 in his honor.

Mickey Mantle spent his entire career with the New York Yankees from 1951 to 1968. He won twenty All-Star picks during that time and was part of an astonishing seven World Series winning teams. He was also a three time AL MVP and won the Triple Crown in 1956. His number 7 has also been retired by the Yankees.

The Yankee Game tickets are always in demand and it is no different this year. The franchise is looking to bounce back this time around and there is enough firepower on the roster to do that.

Will the twenty-seven-time World Champions make it twenty-eight this year? The season is underway, so check the schedule and get your Yankee Game tickets.

The last thing you want to find out is when the New York Yankees event you wanted to go to is sold-out. Don’t worry in many cases ScoreBig has affordable tickets to sold out events. We sell tickets from GA all the way to premium seating and parking. Skip the scalpers in the parking lot and get your tickets online from top New York Yankees ticket brokers. We get you in all events, buy your New York Yankees tickets here from a brand that many trust and rely on for all their ticketing needs.

ScoreBig offers a 100% money-back guarantee. If you have been in search of cheap tickets for New York Yankees, ScoreBig by far is the best option. That’s why ScoreBig has more loyal customers than any other ticketing site. Shop at ScoreBig for safe and secure New York Yankees event tickets.