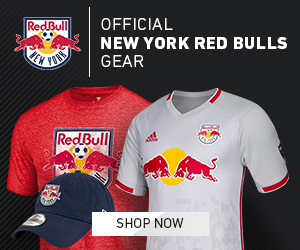 About The New York Red Bulls

The New York Red Bulls are an American soccer club that competes in the Eastern Conference of Major League Soccer (MLS). Based in Harrison, New Jersey, the club has played its home games at Red Bull Arena since 2010.

The club was established in 1994 as the New York/New Jersey Metro Stars. In 2006, the team was sold to the Austrian energy drink company Red Bull GmbH and its name was changed from the Metro Stars to the Red Bulls. Originally, the club’s home field was Giant’s Stadium, but after the team’s sale to Red Bull, construction on a new facility (Red Bull Arena) began.

The team has been competitive since the time of its creation. The Red Bulls have won MLS Supporters’ Shield, an award that recognizes the team with the most regular season wins, three times including in 2018. The club has also reached the MLS cup once in 2008, and the US Open Cup finals twice in 2003 and 2017. In addition, the team has won the Eastern Conference championship six times, most recently being 2017. This success has led to a relatively large fan base for American soccer, including 11,000 season ticket holders.

The Red Bulls are probably best known for their rivalries with other MLS teams. The most notable is their fierce rivalry with D.C. United, with whom they compete for the Atlantic Cup. In addition, the Red Bulls are adversaries with the New England Revolution, Philadelphia Union, and New York City FC.

The Red Bulls are not short on star power when it comes to their roster. Former players include some legendary American soccer players like Jozy Altidore, Michael Bradley, and Tim Howard. Currently, the team is led by their goalkeeper and captain, Luis Robles, who has the club record for most games played as a Red Bull. The most prolific scorer in team history, Bradley Wright-Phillips, is the leader of the offense. The team is managed by second year head coach Chris Armas, a veteran of the MLS and the U.S. Men’s National Team.

Don’t miss your chance to see one of the best teams in the league compete this year! Get your tickets to see the New York Red Bulls on ScoreBig.com today!

The last thing you want to find out is when the New York Red Bulls event you wanted to go to is sold-out. Don’t worry in many cases ScoreBig has affordable tickets to sold out events. We sell tickets from GA all the way to premium seating and parking. Skip the scalpers in the parking lot and get your tickets online from top New York Red Bulls ticket brokers. We get you in all events, buy your New York Red Bulls tickets here from a brand that many trust and rely on for all their ticketing needs.

ScoreBig offers a 100% money-back guarantee. If you have been in search of cheap tickets for New York Red Bulls, ScoreBig by far is the best option. That’s why ScoreBig has more loyal customers than any other ticketing site. Shop at ScoreBig for safe and secure New York Red Bulls event tickets.