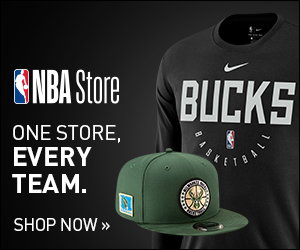 Founded in 1968, the Milwaukee Bucks are a professional American basketball team that competes in the National Basketball Association (NBA) as part of the Eastern Conference Central Division. The team plays its home games at the Bradley Center and is currently being coached by Jason Kidd. Over the years since its formation, the Bucks have won one NBA Championship (1971), two conference titles in 1971 and 1974 and thirteen division titles.The Bucks ended the 2017-18 regular season with a record of 44-38.This placed the Bucks third in the central division and gave them the 7th seed in the Eastern Conference. The Bucks faced the Boston Celtics in the First Round of the playoffs. Milwaukee put up a good fight but in the end they lost the series to the Celtics 4-3. It was the sixth playoff meeting between the Celtics and Bucks.

But now, the upcoming season is right around the corner. The Bucks are locked and loaded and have their sights set on the prize this upcoming season. With a young talented roster including Greek Freak Giannis Antetokounmpo, Milwaukee looks ready to overcome the top dogs of the Eastern Conference and bring home a NBA championship. Division rivals, the Chicago Bulls and the Indiana Pacers will fight to prevent the Bucks' aspirations. Get your Milwaukee Bucks tickets and head down to BMO Harris Bradley Center and help lead your team to victory.

Since their formation, the Bucks have played in some of the most memorable NBA games, a few of which are listed below.

NBA Champions: Winning the championship is always a franchise-altering moment for a team. But to be able to win it in merely the third year of existence is a truly amazing feat. It was during the 1970-1971 season that proved to be very lucky for the Bucks. They dominated the championship series throughout, finishing the regular season with a record of 66-16. The playoffs were even better, with a record of 12-2. This excellent series of performances by the team continued on throughout the ‘70s and ‘80s. Even though the 1970s seem like ages ago, the success of a newborn team, that few expected to survive, never really fades away!

The Thunderous Return from the Bench: On April 8th 2015, in a game against the Cleveland Cavaliers at the BMO Harris Bradley Center in Milwaukee, head coach Kidd benched the rookie, Antetokounmpo, in a move that confused many. Whatever the coach’s reasons were, “The Greek Freak” did not take it lightly. As he came off the bench, he blocked a shot from Tim Hardaway Jr., grabbed the ball and took off down the floor. The moment that followed truly became a neat finish by The Greek Freak, making it one of the best goals of the game, with Antetokounmpo completely lost in the moment!

Rivalries of the Milwaukee Bucks

Having been a part of professional basketball leagues for a long time, the Milwaukee Brewers have been at the center of some super-heated rivalries.

Bucks vs. Bulls Playoff Rivalry: Chicagoans don’t take rivalries lightly and can be a bit haughty towards their neighbors from the north. Even though the Bulls and the Bucks have met in the NBA playoffs a bunch of times now, it was their meeting in 1990, which had 68 personal fouls, 96 free throws and six technicals that set the standard for an intense rivalry. The game took place on 3rd May, 1990, at the Bradley Center, Milwaukee. After this game, the NBA rule makers took note and created stronger rules against hard fouls and aggressive plays.  The Bulls won this game, 110-86.

Bucks vs. 76ers: This season, this simmering rivalry might develop into a full-scale blaze. Both the teams are in a similar position – up and coming teams that are not yet prepared to take on the top teams in the Eastern Conference. Both the teams have got a lot to prove to their fans and it is likely that they might end up near the top once LeBron James decides to leave the Cavaliers or retires. This developing rivalry might be the one to watch out for in the upcoming season, for fans at both sides!

Greatest Players of the Milwaukee Bucks

The Milwaukee side has seen many great players put on its green and white jersey. Kareem Abdul-Jabbar is one of the most talented players to have ever played for the Bucks. He was with the team during 1970-1975 and was considered one of the greatest centers of all time. With 30.4 points and 15.3 rebounds per game, Kareem was truly a force to be reckoned with. He led the team to its only championship win in 1971.

Oscar Robertson was another big name for the Milwaukee Bucks. Known as “The Big O”, Robertson’s ability to score and rebound was truly a class apart. He and Kareem made a lethal duo. He was with the team during 1971-1974.

Sidney Moncrief played for the Milwaukee Bucks between 1980 and 1989 and had the second-longest tenure in the Bucks uniform. Averaging at 21.0 points, 5.8 rebounds and 4.7 assists, the value of Moncrief was truly irreplaceable for the team. He was named the NBA’s Defensive Player of the Year in 1983 and 1984.

The upcoming NBA regular season is all set to kick off. Situated in downtown Milwaukee, makes the Bradley Center a great destination for a night out. Located near museums, theaters, restaurants, and bars, there is something for everything to enjoy pre and post Bucks contests. With new renovations finally approved, Milwaukee fans will be enjoy a first class game day experience, every time out!

The last thing you want to find out is when the Milwaukee Bucks event you wanted to go to is sold-out. Don’t worry in many cases ScoreBig has affordable tickets to sold out events. We sell tickets from GA all the way to premium seating and parking. Skip the scalpers in the parking lot and get your tickets online from top Milwaukee Bucks ticket brokers. We get you in all events, buy your Milwaukee Bucks tickets here from a brand that many trust and rely on for all their ticketing needs.

ScoreBig offers a 100% money-back guarantee. If you have been in search of cheap tickets for Milwaukee Bucks, ScoreBig by far is the best option. That’s why ScoreBig has more loyal customers than any other ticketing site. Shop at ScoreBig for safe and secure Milwaukee Bucks event tickets.