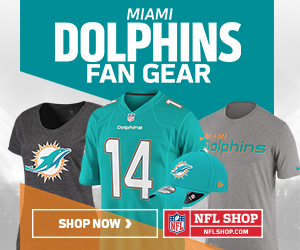 The Dolphins are locked and loaded to make a run at another Super Bowl title. After several years of struggling to get back into title contention, the Dolphins have finally arrived. With a young core and talented veterans, the Dolphins are looking to win the AFC East over rivals the New England Patriots and the Buffalo Bills. Additionally, the Dolphins are poised to keep supremacy over Florida's other football squads, the Tampa Bay Buccaneers and the Jacksonville Jaguars

Grab your Miami Dolphins tickets and help lead your team on its quest for a championship.

The Miami Dolphins have got the bit between their teeth as they made it to the postseason in 2016 for the first time since 2008. The Dolphins were unable to carry that momentum in the 2017 season, finishing with a 6-10 record and subsequently not making the playoffs. Will the Dolphins turn it around this year? That is the all important question and one that will be answered when they take to the field during their upcoming campaign.

Either way it will be an important season for the Dolphins and the fans will be out in full force to back their side all the way through till the end.

Back to Back Super Bowls- The Miami Dolphins made it to the Super Bowl in 1971 but came up short against the Dallas Cowboys 24-3. That however wasn’t the end of it. They went all the way to NFL’s showpiece encounter next year too. This time they were up against the Washington Redskins at the Los Angeles Memorial Coliseum and the Dolphins came out on top 14-7 to clinch their first Super Bowl title. The 1973 season saw them go to the Super Bowl once again and this time their opponents were the Minnesota Vikings. The Dolphins won their second successive Super Bowl at the Rice Stadium 24-7.

The Dolphins were the first ever team in NFL history to make it to three consecutive Super Bowls. Their two Super Bowl wins also made them only the second side in history to clinch back to back Super Bowl triumphs.

The Perfect Season of 1972 - The Miami Dolphins won their first Super Bowl in 1972 but the season they had leading up to that triumph was record setting as well. The Dolphins recorded the first and till date only perfect season in NFL history. They won each and every single one of their fourteen regular season clashes and then followed that up by winning all their postseason games too. They did end up winning the Super Bowl at the end of the campaign to set a record that is yet to be broken.

Don Shula: The Record Breaker- The legendary Don Shula coached the Miami Dolphins for an incredible twenty six seasons. He set many records during his tenure as the coach of the Dolphins and one of those was amassing more wins than any other coach in NFL history. Don retired with 328 regular season wins to his name as both the head coach of the Miami Dolphins and the Baltimore Colts who he coached from 1963 till 1969. 257 of those wins came with the Dolphins while he won the other 71 encounters as the coach of the Colts.

The Miami Dolphins have had some epic encounters over the years. The New York Jets, the Buffalo Bills and the New England Patriots standout as their three biggest rivals.

The Dolphins-Bills Rivalry - The Miami Dolphins and the Buffalo Bills faced off against each other for the first time on September 18, 1966 in an encounter that was won by the Bills 24-58. The rivalry between these two sides kicked off in the 1970s when the Dolphins won twenty consecutive games against the Bills. Not only that, but these two sides also had two of the best QBs of that time playing for them. The Dolphins had Don Marino playing for them while the Bills had Jim Kelly. That added an extra bit of spice to the proceedings whenever these two teams faced off.The Dolphins-Jets Rivalry- The Miami Dolphins and the New York Jets were incepted six years apart as members of the American Football League. After the AFL-NFL merger, these two sides were placed in the AFC East and that formed the basis of this intense rivalry. Regardless of where these two teams are in the table, the games between them are always intense.

The Dolphins-Patriots Rivalry - There is absolutely no love lost between the Miami Dolphins and the New England Patriots. During the early part of this rivalry, which began in the 1960s, it was the side from Miami that had the upper hand. Now it is the Pats that have dominated meetings between these two sides, especially since 2003. The rivalry intensified further when the Dolphins clinched the AFC East title in 2008. That made them the only side apart from the Pats since 2003 to win the AFC East.

Located in Miami Gardens, this 75,000 seat stadium provides Dolphins fans with great football experience. Hard Rock Stadium features two outside patios where fans can meet and enjoy the Miami weather before heading to their seats. For fans looking to enjoy a party atmosphere at the game, the Dolphins bring South Beach to Sun Life with LIV Sun Life Stadium. Additionally, fans can learn more about Dolphin history with the "Gallery of Legends."

The Hard Rock Stadium is one of the most famous stadiums in the country, especially when it comes to hosting sports events. It is the venue of the annual Orange Bowl and has also played host to five Super Bowls. On top of that, the Hard Rock Stadium has also hosted the BCS National Championship Game on four occasions and WrestleMania once.

There is one name that stands at the top of the list of the greats that have played for the franchise. He is none other than the iconic Dan Marino. Dan spent his entire career with the Dolphins and became a nine time Pro Bowl pick. He also made it to the All-Pro first team on three occasions. The Dolphins have rightly retired his number 13.

Before Dan there was Larry Csonka who led the Dolphins to their only two Super Bowl triumphs till now. He was also the Super Bowl VIII’s MVP. Csonka was selected for the Pro Bowl on five occasions during his time with the Dolphins and has also had his number 39 retired by the franchise. Most recently, there was Jason Taylor who delivered stellar performances for the Dolphins. He has made it to the Miami Dolphins Honor Roll and became a six time Pro Bowl pick. He was also the NFL Defensive Player of the year in 2006.

The Hard Rock Stadium will be packed to the rafters when the Dolphins step out this season. Imagine being in the middle of thousands of cheering and screaming fans rooting for their team. It is an experience unlike any other. If you want to be a part of it, then this is your chance.

The Miami Dolphins will be eager to make the most of the improvement they showed last season. Now that the schedule for their games is out, fans are looking for Miami Dolphins tickets.

The last thing you want to find out is when the Miami Dolphins event you wanted to go to is sold-out. Don’t worry in many cases ScoreBig has affordable tickets to sold out events. We sell tickets from GA all the way to premium seating and parking. Skip the scalpers in the parking lot and get your tickets online from top Miami Dolphins ticket brokers. We get you in all events, buy your Miami Dolphins tickets here from a brand that many trust and rely on for all their ticketing needs.

ScoreBig offers a 100% money-back guarantee. If you have been in search of cheap tickets for Miami Dolphins, ScoreBig by far is the best option. That’s why ScoreBig has more loyal customers than any other ticketing site. Shop at ScoreBig for safe and secure Miami Dolphins event tickets.