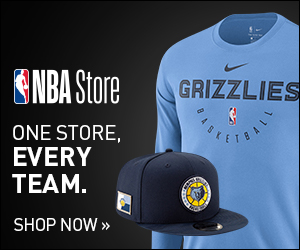 Originally created as the Vancouver Grizzlies, the Memphis Grizzlies play in the National Basketball Association as part of the league’s Western Conference Southwest Division. The team is owned by Robert Pera and plays its home games at the FedExForum. Even though the team has yet to win a major championship, fans are excited to come back in the upcoming season. During the last season, the team finished, 22-60 ending up in last place in the Southwest Division, and 14th in the Western Conference. It was clear their effort in the regular season would not qualify them for the playoffs.

But this season, under the talented new head coach, David Fizdale, the Grizzlies are locked and loaded and are ready to make their presence known in a highly competitive Western Conference. Led by a gritty lock down defense, Memphis looks poised to reign atop of the Southwest Division.Division rivals, the San Antonio Spurs and the New Orleans Pelicans will fight to keep the Grizzlies down. Grab your Memphis Grizzlies tickets and head down to the FedEx Forum to be a part of your team's home court advantage.

Since its inception in 1995, the Memphis Grizzlies have seen quite a lot of memorable moments.

The First Winning Season: It was with the optimal use of talent, coaching and brains that got Memphis the 2003-2004 season victory – making it their first winning season in the history of the franchise. They managed to improve 22 games to arrive at a 50-32 record, which still remains as the best regular season record by any Grizzly team. Thanks to this winning season, Coach Hubie Brown won the 2004 NBA Coach of the Year Award while Jerry West landed the 2004 NBA Executive of the Year – the first and the only such award for the franchise. To top it all off, the fans got a winning moment they are not likely to forget any time soon!

Mario Chalmers’ Game Winner: In a game on the 14th of January, 2016, against the Detroit Pistons, Mario Chalmers gave the Memphis Grizzlies’ fans a moment to remember for all times to come. It was during this game that the previously resented Chalmers managed to gain the respect of the people of Memphis. He hit one of the most clutch shots ever, over Derrick Rose and then hit the game winner at nearly the exact same spot, sending the crowd roaring with excitement. Taking place at the FedExForum, the game was won by the Grizzlies 103-101.

Rivalries of the Memphis Grizzlies

Whether it is the brutal recurring playoff games or the bad blood between individual players, the Grizzlies are known to have some of the most intense rivalries in the NBA.

San Antonio Spurs: The biggest rivals of the Grizzlies are without doubt, the San Antonio Spurs. It was in 2004, when the third-seeded Spurs swept the sixth-seeded Grizzlies and helped formulate what would become a highly intense rivalry. In 2011, the Grizzlies came back into the playoffs, as the confident eight seed. With Manu Ginobili of the Spurs injured, the Grizzlies sailed right through the series, winning three of the first four games as it took the series home. But in 2013, the tables were turned. As the two teams met in the 2013 Western Conference Finals, the Grizzlies suffered blowout losses in both Game 1 and Game 2 and by Game 3, it was clear that the series was out of their hands. This back and forth between the two teams has kept the rivalry alive and blazing.

Los Angeles Clippers: This rivalry has grown out of the two first-round playoff meetings between these two teams in 2012 and 2013. In 2012, the Clippers won an exciting Game 7 in Memphis, while in 2012, the Grizzlies beat the Clippers in six games, always keeping the fans excited and enticed!

Greatest Players of the Memphis Grizzlies

Even though the Memphis Grizzlies have been around for a short period of time, they have had quite a few impressive players on their roster.

Zach Randolph very quickly managed to become the best player in the Grizzlies history. His two best years were the 2009-10 and the 2010-11 season, where he led his team in terms of scoring average and rebounds in each game. He has been the best rebounder that the Grizzlies have ever seen, with an impressive 11.3 rebounds per game.

In addition to Randolph, another great player is Marc Gasol. He is a solid rebounder, great shooter, keen passer and a very sturdy defender. He has gotten the Defensive Player of the Year Award and ranks fourth in terms of rebounds per game. To add to this, he also leads the Grizzlies in field-goal percentage with 52%.

No list of Memphis greats is complete without the mention of Pau Gasol. He is credited with having led the team in scoring and rebounding six and five times and also led the team in blocks a total of five times.

With such a great history and talented players under its name, the Memphis Grizzlies are all set to make an enthusiastic return to the field. And you will not want to miss it! Grab your Memphis Grizzlies playoff tickets now and head on over to the FedExForum to get a basketball experience unlike any other!

The FedEx Forum is unique due to its Memphis Music theme. Throughout the arena, guests can admire images of original art featuring regional artists whose work interprets music of the region. The most authentic element of FedEx Forum Memphis Music theme is the fact that the Smithsonian's Rock Soul Museum is located on the arena grounds. That combined with the Rock? Soul Museum also makes a unique game day experience, pre or post game.

The last thing you want to find out is when the Memphis Grizzlies event you wanted to go to is sold-out. Don’t worry in many cases ScoreBig has affordable tickets to sold out events. We sell tickets from GA all the way to premium seating and parking. Skip the scalpers in the parking lot and get your tickets online from top Memphis Grizzlies ticket brokers. We get you in all events, buy your Memphis Grizzlies tickets here from a brand that many trust and rely on for all their ticketing needs.

ScoreBig offers a 100% money-back guarantee. If you have been in search of cheap tickets for Memphis Grizzlies, ScoreBig by far is the best option. That’s why ScoreBig has more loyal customers than any other ticketing site. Shop at ScoreBig for safe and secure Memphis Grizzlies event tickets.