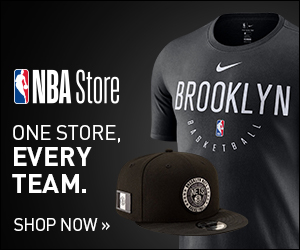 The Brooklyn Nets have delivered plenty of memorable moments that their fans will remember for generations to come. Let’s take a look at some of them.

On the Road to the NBA Finals – The Brooklyn Nets were outstanding in the 2001-02 season. That year, the team qualified for the postseason and won the Conference Semifinals and Finals by defeating the Charlotte Hornets, 4-1 and the Boston Celtics, 4-2 respectively. They later crossed paths with the Los Angeles Lakers for the NBA Championship. Unfortunately, the team couldn’t get past them and lost the bout, 4-0.

Randy Foye’s Buzzer Beater Knocks off Charlotte Hornets – On December 26, 2017, the Brooklyn Nets squared off against the Charlotte Hornets at the Barclays Center. That day, something spectacular happened. It looked like Hornets were going to win the game as they were leading 118-117 but then at the last minute, Randy Foye knocked down a game winning, buzzer beating three-pointer to win it for his team, 120-118. The head coach of the Nets, Kenny Atkins was ecstatic and stated, "I’m just thrilled with our group. We went through some tough times recently. So to come back and get a win like this … the way we got it is special.”

Arch Rivals of the Brooklyn Nets

The Brooklyn Nets have intense rivalries with the likes of the New York Knicks and the Toronto Raptors.

Nets-Knicks Rivalry – The rivalry between the Brooklyn Nets and the New York Knicks started in 1976 when the former joined the NBA as part of the ABA-NBA merger. The media outlets have dubbed this rivalry, ‘Battle of the Boroughs’ or ‘Clash of the Boroughs’ due to the close proximity of both teams and the overall history of Brooklyn and Manhattan. In addition, these two sides compete in Atlantic Division of the Eastern Conference which adds fuel to the fire.

Nets-Raptors Rivalry – The Brooklyn Nets and the Toronto Raptors became rivals when Vince Carter was traded to the Nets on December 17, 2004. This trade created the big three of Richard Jefferson, Vince Carter and Jason Kidd in Brooklyn. Since then, these two teams have developed a rivalry which got more intense when the Nets defeated the Raptors in the first round of the playoffs, 4-3 in the 2013-14 season.

A Net ticket gets you inside this brand new state of the art facility in the heart of Brooklyn. Opened in 2012, the Barclays Center provides fans with a first class game-day experience and being situated in the heart of Brooklyn makes it very easy to access the amenities of New York City and Brooklyn before and after Nets' games.The Barclays Center is a multi-purpose indoor arena. It is not just the home of the Brooklyn Nets, but the New York Islanders of the National Hockey League also play their home games there.

Greatest Players in the History of Brooklyn Nets

The Nets have had plenty of star players on their roster. A few, Bob McAdoo, Mel Daniels, Rick Berry and Nate Archibald have been inducted into the Brooklyn Nets Hall of Fame.

Then there is Derrick Coleman who joined the Brooklyn Nets in 1990. He remained with the team till 1995. While he was part of the Nets, he was picked to play in the NBA All-Star Game in 1994. Moreover, he was selected in the NBA All-Rookie First Team in 1991. Derrick also won the Big East Conference Men's Basketball Player of the Year Award in 1990.

The Brooklyn Nets failed to qualify for the playoffs in the 2017-18 season. The team is now gearing up for the new season. The Nets currently have talented players like Jahlil Okafor, D'Angelo Russell, and Jeremy Lin on their roster. So, who knows they might capture their first NBA Championship this time. But for that to happen, they need your support. So, get your Brooklyn Nets tickets now.

The last thing you want to find out is when the Brooklyn Nets event you wanted to go to is sold-out. Don’t worry in many cases ScoreBig has affordable tickets to sold out events. We sell tickets from GA all the way to premium seating and parking. Skip the scalpers in the parking lot and get your tickets online from top Brooklyn Nets ticket brokers. We get you in all events, buy your Brooklyn Nets tickets here from a brand that many trust and rely on for all their ticketing needs.

ScoreBig offers a 100% money-back guarantee. If you have been in search of cheap tickets for Brooklyn Nets, ScoreBig by far is the best option. That’s why ScoreBig has more loyal customers than any other ticketing site. Shop at ScoreBig for safe and secure Brooklyn Nets event tickets.